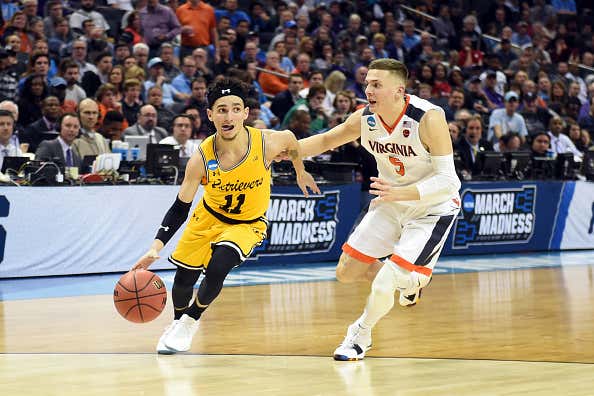 [Duke Chronicle] - Former UMBC point guard K.J. Maura, who planned on coming to Duke’s game against Virginia Saturday at Cameron Indoor Stadium after his Retrievers stunned the top-seeded Cavaliers in the NCAA tournament last March, will no longer be in attendance, Head Line Monitors Steve Hassey and Peter Potash wrote in a post in the K-Ville Nation Facebook group.

“UMBC’s coach got wind of his arrival, and he wants their squad to move on from the greatest NCAA Tournament upset of all time,” Hassey and Potash wrote. “Ultimately, he called Coach K multiple times, and [Mike Krzyzewski] had to request that KJ not be in attendance.”

I’m not one to take Duke’s side in many things, especially when it comes to the dumbass idea of head line monitors of K-Ville. But, what the hell is this Ryan Odom? How can you just shut down the idea of a fan base bringing in a guy who isn’t playing college ball anymore? It’s a phenomenal move.

Listen, it doesn’t matter if Virginia wins the next 5 national championships. They’ll always be known as the first No. 1 seed to lose to a No. 16. It’s going to stick with them forever. One of the stars from UMBC is KJ Maura, the diminutive point guard who played alongside Jairus Lyles.

That’s why this is a great move. Obviously Virginia plays at Duke on Saturday in the first Saturday where it’s just college basketball on TV. The reason being that Odom wants to move on from the greatest NCAA Tournament upset – sure, I get that to a degree. You don’t want to live in just that bubble, although it worked out for Shaka Smart and that run to the Final Four with VCU. But, come on, you have to let them do this. You can’t be begging not to have a former player show up.

This is the beauty of college hoops though. You can’t really do this at the NBA level. It’s not like people were bringing Dikembe or cutouts of Dikembe to Seattle after Denver beat them as a No. 8 seed.