Again, I don’t care how many videos come out like this they are awesome. Seeing walk-ons get surprised with a scholarship is one of the coolest things in college sports. But, this is flat out cruel.

I mean imagine sitting there getting ready for a meeting only for a cop to walk in and say your name. Not just that. But saying he’s following up on an investigation for a detective. Think about that in college. All those nights you’re hammered, your mind starts running. What did I do wrong? Shit, I had to do something right?

First off, great acting job by Jamie Dixon. Look at this face: 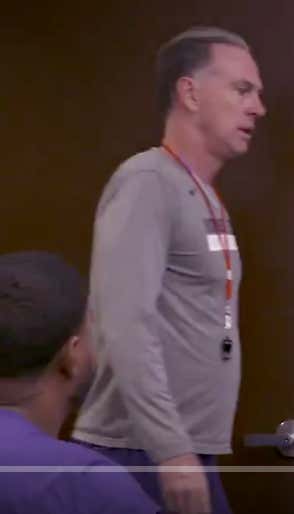 He’s playing it perfectly. That face shows that someone is in trouble. He doesn’t break character. Pretty impressive short performance by a head coach. That combined with a cop saying your name and the poor kid gets big eyes. I actually feel bad for the kid for that split second before he gets his scholarship offer.

So shout out to Owen Aschieris. He’s a sophomore who started his life at TCU as a practice player for the women’s team before walking on the men’s team. He’s played 12 minutes so far this season. Maybe next time don’t scare the hell out of a kid.