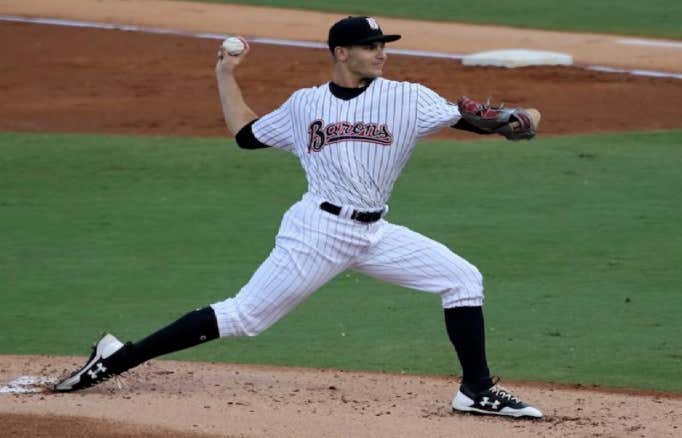 Every now and then I’ll go down youtube rabbit holes of players and break them down to myself.  If you listen to Red Line Radio, you know that Carl and I are both changeup and repeatability enthusiasts.

I get that most people don’t come to Barstool for hardcore, Fangraphs style pitching analysis, and I hate giving the kid credit for anything, but Carl wrote the best sports blog I’ve ever read on Barstool on Jake Arrieta a few years back, in my humble opinion.

You can read that whole blog here.

There’s only one former Division 1 walk-on athlete at Barstool who can break down pitching mechanics like, and that person is Carl.  90% of the time Carl and I are trying not to kill each other, but the other 10% of the time we’re having level headed, high altitude, in depth discussion on anything and everything baseball.  And when the Sox traded Jose Quintana for Eloy Jimenesz, Dylan Cease and two other players in 2017, Carl told me “wait until you watch Dylan Cease throw”.

Cease, committed to attend Vanderbilt, dominated the showcase circuit to to the point where he earned an invitation to the Perfect Game All American Classic.  He was earning 1st round grades by multiple organizations, but unfortunately suffered a partial tear in his UCL while pitching in the Classic.

Theo didn’t give a shit though.  He believed in Cease’ shit so much so that he gave him a $1.5MM signing bonus in the 6th round of the draft.  Now, in 2013, that would have been good for 1st round comp round money.  Theo thought so highly of Cease that he said “hey, we’re paying this kid, UCL tear be damned, borderline 1st round money and he isn’t sniffing college.  His ceiling is that high.”

Crazy right?  I’m sure the entire industry thought so, Vanderbilt coaches included.  But worth a 6th round flyer because of this: 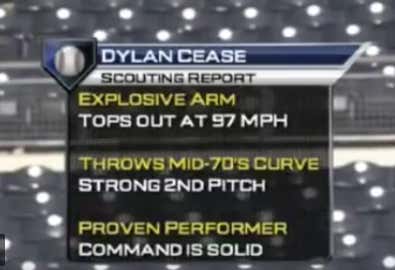 But let’s walk it back to Cease in HS.  Here’s a some tape of him pitching in the Perfect Game showcase:

Roughhhhh delivery.  There’s hardly any fluidity at all, his mechanics are susceptible to injuries, and he shows an extreme lack of coordination and poorly repeated motion.  And that’s the operating word for the rest of this blog.  Repeatability.  I’ll get to what that means later, but first let’s take a look at this GIF:

The very first thing that pops out to me is that Cease flies open with his plant foot and leg.  Imagine drawing a line from the middle of the pitchers mound through the exact center of the plate.  In HS, when Cease would land, he’d land on the 1B side of the imaginary line.

Now why is this bad?  Well, a few things.  For one, it exposes his throwing shoulder, and badly. Watch his motion in the video above: his front hip clears way too soon, his trunk over rotates, and he lands on his plant leg’s heel.  His muscle memory was conditioned to do so, which is one of the reasons he had arm issues at such a young age.

Now, pitching is an extremely unnatural motion.  There isn’t much room for error, if that’s the correct phrasing, in keeping an arm healthy or beating it to shit.  And when Cease was throwing in HS, his plant leg, hips and torso, all leave his shoulder and subsequently his elbow exposed because he has poor repeatability in his mechanics.  His arm needed to catch up to the rest of his body, which caused extreme arm drag.  Every pitch was putting too much stress on his elbow.

Now what is arm drag?  Arm drag occurs throughout any pitcher’s motion and is unavoidable to a certain degree, but it should be limited as much as possible.  This is a still shot of what I’m talking about when describing arm drag: 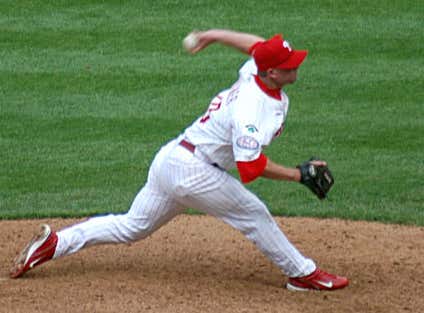 I’m in pain just looking at this picture

And arm drag is a UCL’s worst nightmare.  But Cease’ arm drag was over exaggerated because of the aforementioned issues at the start of his delivery as and before the ball was being throw.

But that doesn’t matter; a UCL tear is far from a death sentence anymore.  In fact, organizations have had pitchers get TJS when not completely necessary just to get out of the way.  Often times pitchers will come back physically stronger after it than prior to the surgery.

Which is exactly what happened with Cease.  Here’s a GIF of Cease in 2018 in AA Birmingham:

Better… but still not good.  Dylan Cease was currently ranked as the 25 overall prospect in baseball and 5th overall RHP: 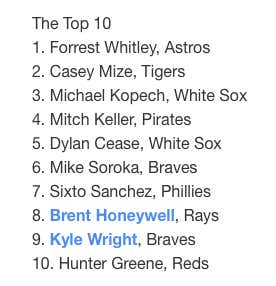 And it’s all due in part to his ceiling and projectability.  Here are his scouting grades, also per MLB Pipeline:

When you pair a 95+ MPH fastball with the best curveball in MiLB and a good pitcher’s frame, you’re gonna be held in high regard.  But one thing all of these click bait-y prospect rankings lists don’t take into account with pitchers is their durability, or a pitcher’s ability to throw every 5 days without concern for health.

And that’s Cease’ biggest question.  Last year was his first “full” year as a pro after his TJS.  He was named MiLB’s pitcher of the year, and threw up this stat line:

Awesome.  But personally, I keep thinking back to his tape and mechanics.  A pitcher with proper mechanics finishes like this: 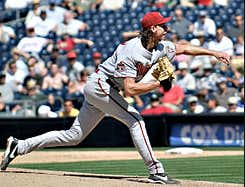 But Cease doesn’t do so yet.  Notice how Randy Johnson’s glove is tucked to his chest after the ball is released.  This keeps his throwing shoulder closed, keeps him directional towards home plate, and helps reduce arm drag.  Cease, on the other hand, finishes like this: 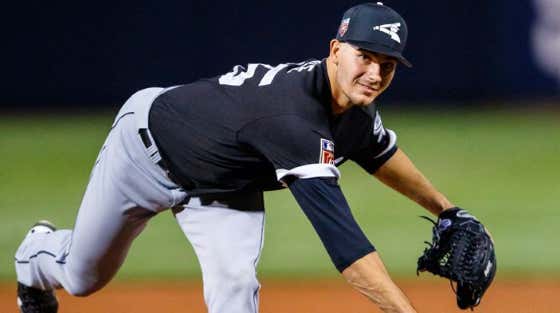 His glove side is extremely weak and is still flying open. This is something he has to cleaned up to address his durability concerns.  Which brings us back to the original thesis of this blog:

He needs to repeat a more closed off motion every single pitch. Like Randy Johnson does in the aforementioned still shot. In other words, he needs to develop muscle memory with so he 1. alleviates health and durability issues and 2. alleviates command issues.  If he takes care of #1, number 2 will follow suit.

Cease has a 1 in a million arm.  95-97 MPH with life, a devastating hook, and the ability to throw a wipe out changeup.  Should he put together this arsenal of pitches with a repeatable, smoother motion he has the ceiling of an ace.  If he doesn’t, the floor of a high leverage reliever with continued health concerns.

I expect Cease to follow the Kopech path to the Show this year.  He dominated Birmingham last year, but it’s a notorious pitcher’s park.  Should he dominate in Charlotte, a notorious hitter’s park, I wouldn’t be surprised if he sees Chicago sooner than later, so long as he cleans up his mechanics just a touch more.  He’s on the right path, but there is still work that needs to be done.