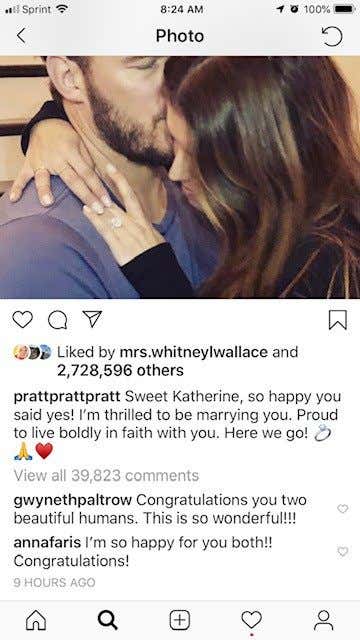 Maybe I’m just not mature enough to comprehend this level of emotional intelligence but get ALLLLLL the way out of here, Anna. This is so forced it’s giving me secondhand embarrassment and making me want to crawl out of my skin. I mean, come on, this is way way too much. I know you have an adorable kid together and all that but there’s no way you’re HAPPY that your ex-husband got engaged to some crazy rich, beautiful woman.

That’s just human nature. I don’t care if you’re homeless or an A-list celebrity, you do not want your ex finding happiness after you. You want to win the breakup. You want them to be lost without you. You want to be the greatest thing that ever happened to them and the thing they’ll never have again. I don’t care who you are, that’s a fact. It’s maniacal and sadistic, but it’s a fact. It’s just the way humans are wired.

So it’s perfectly acceptable, even expected, to be upset that your ex found love after you. I’m not saying you need to comment “she’ll never be me” on the post but you absolutely can’t be commenting that you’re so happy and congratulations with way too many exclamation points. That’s the dead giveaway right there: four exclamation points in two sentences? That’s clearly trying to mask your sorrow and disappointment with faux enthusiasm.

Again, I don’t blame Anna for being mad, she should be. Just don’t try and tell me you’re happy.