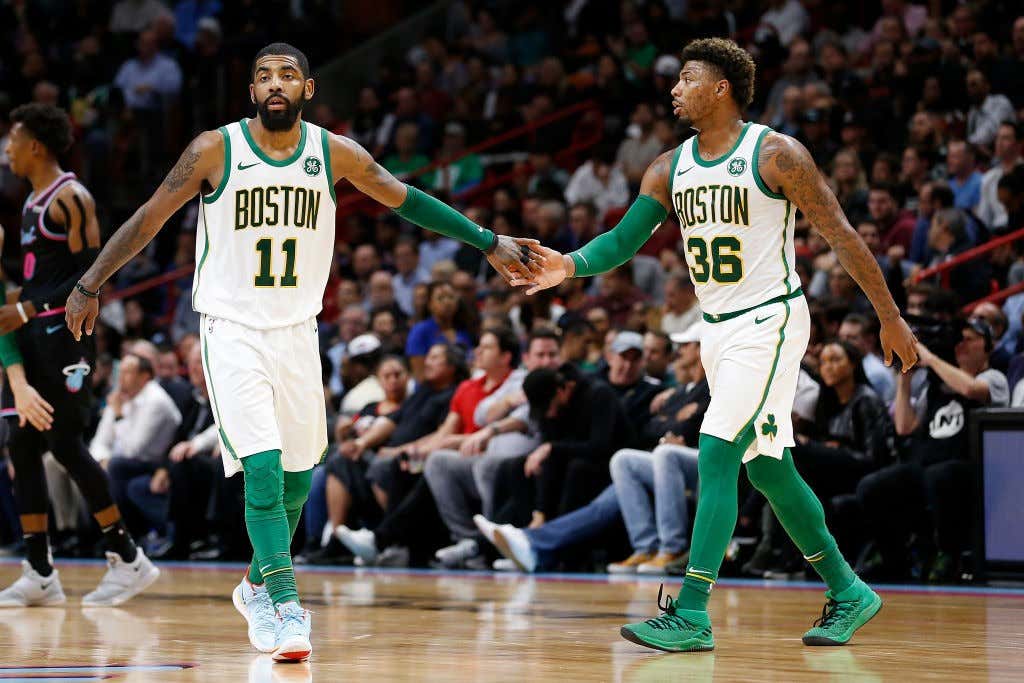 Continuing our Monday tradition, it’s time to look back and pick the best 5 plays from the past week. It was an up and down 7 days for the Celts, with a 2-2 record with a great win over Indiana, but then two brutal inexcusable losses to MIA and ORL. I’d say we should be used to this by now when it comes to watching this team, but it still bugged the shit out of me. Now that there’s fighting between teammates, guys calling each other out for not playing hard, and today we learned that half the team is out against BKN, we need some positive spin here. That’s where this blog comes in. Ignore all the depressing shit going on right now and just enjoy some of the better moments from the past week.

Plays like this are why every Celtics fan loses years off their life when they see Tatum settle for long twos instead of being aggressive and attacking the rim. With this play in particular there’s a lot to like. Sure the crossover was quick and nasty, but Sabonis is a big who was on an island so I would expect Tatum to be able to blow by him with ease. What I loved about this play was Tatum’s split second decision as soon as he spun off Horford he noticed that there was absolutely zero rim protection in the paint. That’s the type of offensive awareness I want to see from Tatum, that every move he makes comes with a purpose. We didn’t see him dick around and iso Sabonis, it was catch, spin, boom decision. I’ll take more of that please thank you.

Just a flat out ridiculous shot. We know Kyrie is an incredible finisher around the rim and pure scorer, but I don’t think I’ve ever see him take and make a 15ft floater like we got here. Certainly as a member of the Celtics. I mean he took off right under the circle, practically took a floating college three and hit nothing but net. That is insane. You add in the fact that the arc on the shot practically hit the roof, and all you can do is shake your head watching this display of basketball wizardry.

Nothing like some beautiful chaos. This was about a crazy sequence from this team as we’ve gotten all season, and it just goes to show what can happen when every single player on the floor tries. This is the type of effort that makes the Celtics who they are, and it was great to see that type of effort even with things being a complete blowout. I also didn’t hate the step in pullup by Jaylen, I’d like to see him knock down that shot consistently. No surprise it was Semi who made the play, and maybe just maybe it’s time for Brad to give him some minutes since for the most part the bench has been real bad when it comes to energy and effort.

Timelord had a bunch of great blocks this past week, but this one was my personal favorite. I love how he reads the play as soon as the opponent gets to the FT line, times it perfectly, and then sends this shit to Worcester. It seems like every single one of his blocks has this result, just a volleyball spike right down to the center of the earth and frankly that’s exactly what this team needs. Give this man more minutes, let him block everything in sight and start a fast break, then toss it off the glass and let him throw it down. This past week ended so poorly, I couldn’t not have some Timelord in there to make us all feel a little better.

1. Marcus Smart is the best center in the league despite being a point guard

Easiest choice of all time. Why do Celtics fans love Marcus Smart? Well maybe because he can guard all 5 positions at an elite level as a point guard. You want to back him down? Nope. You want to try and drive by him? Sorry no dice. You think you’re some big bad dunking big like Bam and you can put him on a poster? Ha you fucking idiot Marcus eats bums like you for breakfast at the rim. What a read coming from the weak side, what timing, and what precision to not foul and get nothing but the ball. This play alone made his contract extension worth it, and the best part about it is he does stuff like this all the time. What a play, what a player. The ultimate swiss army knife that is crucial to everything Brad wants to do in terms of his lineups and his defensive scheme.

Honorable Mention: Yabu’s block vs IND, Mook’s stepback vs ORL, Kyrie’s Fuck You Three vs IND, all of Horford’s passing.

So that’s my list. I’d say let me know what was your personal favorite from the past week in the comments below, but ya know, that’s a sensitive subject. We have four more games this week with BKN/TOR/MEM/ATL, so hopefully things are a little more positive heading into next Monday.