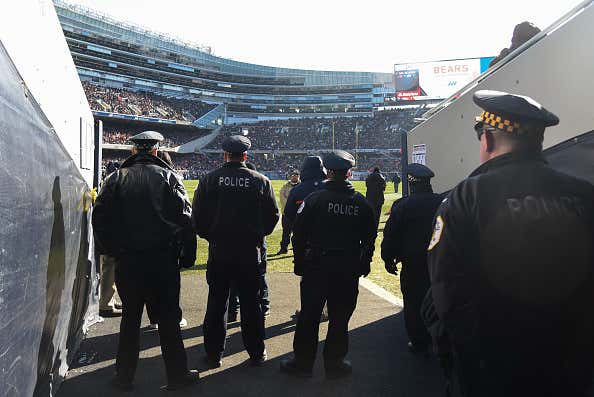 CWB Chicago – Chicago Police Department records show that five people were arrested in connection with the Bears Eagles game last Sunday. That’s the most arrests at a Chicago sports team event since nine arrests were made at the Cubs’ World Series victory parade in 2016. By comparison, six people were arrested in Wrigleyville on St. Patrick’s Day last year. An average of four persons were arrested each day at Lollapalooza last year. Facing the most serious charges in connection with last Sunday’s game is 50-year-old Alejandro Casanas of Miami, FL.

Bears security detained Casanas on the playing field after determining that he was wearing counterfeit media credentials. A search of Casanas turned up four additional fake media lanyards in his possession along with an ID card that belonged to a member of the Bears Security Group, according to court records. Casanas did not have a ticket to the game, and he had no personal ID in his possession, according to police. He is charged with felony possession of false documents in a public place of amusement; felony forgery, and theft of lost or mislaid property. Other arrests include:

• Paul Simon, 54, of Waterboro, Maine, was arrested outside of Soldier Field and charged with misdemeanor unauthorized use of trademarks for allegedly trying to sell 24 Bears scarves that the team said were counterfeit.

• Two concession stand workers were arrested during the game after they allegedly “took unauthorized control of beer cups,” sold beer to patrons, and then pocketed the money, according to prosecutors’ allegations. Pinkie Macklin, 22, and Antolwanna Tureaud, 31, are each charged with one count of theft.

I’m a big non-violent crime guy. I touched on some bribery earlier today and am delighted I get to circle back on counterfeit media credentials, counterfeit scarves and unauthorized cash-based alcohol distribution. This is the hustle that defines Chicago and allowed us to dominate St. Louis and Indianapolis and Des Moines and Milwaukee and all the other pretenders in the 19th Century on our way to industrial and architectural greatness.  There’s just something about living here  that makes you want to scam other people. I put a lot of that on Midwest Values. Midwestern people are BY FAR the easiest people to scam on planet earth and Chicago is loaded with them.

Circling back on some of these allegations, I feel like felony charges for scamming your way in field passes is pretty ridiculous. Like where’s the guy who got his credentials goosed in broad daylight? Is he getting charged for being incompetent? Probably not and that’s the problem with American Justice. There’s no reward for taking risk anymore. One second you’ve got a box of premium artisan Chicago Bears scarves ready to go at $20 a pop. Next thing you know you’re surrendering merchandise over a simple trademark misunderstanding. I thought this was America? I thought we were capitalists.

Anyways, just baffled that there weren’t more violent arrests. Tens of thousands of hammered and emotional Bears fans and not one major brawl. Idk if we’re getting soft or what, but I think we can all agree these days are long gone: