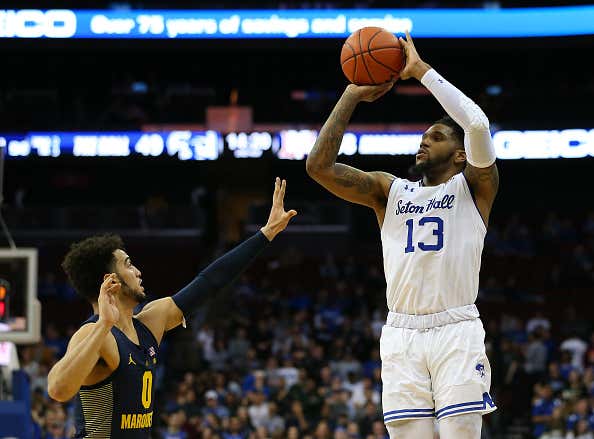 I’m still working on a witty title for this series, so be patient with me on that. That said, I’ll be doing this on every Saturday when it calls for it – which is pretty much every Saturday now that we’re in conference play. During the week I’ll be doing top-25 roundups with recaps and then previews for the day big games. The setup will be talking about the major games and storylines each Saturday, listing what I think are the 5 best games and then giving some picks at the end. Let’s hoop.

Just how fast will Florida State play against Duke?
Duke travels to Florida State today in a battle of top-15 teams. We’ve seen this before. When Duke played Auburn in Maui, the Tigers who typically want to play as fast as possible slowed the game down and tried to play more like Virginia, burning clock. It didn’t work. Sure, it was a close loss but Duke controlled the entire game. Florida State is a team that wants to press the hell out of you, try and force turnovers and then push tempo. We’ve seen that you really don’t want to run with Duke as much as possible, that’s when they are at their best. Here’s the one thing though. You can try and trap, force the ball out of Tre Jones hands early since he’s the one that sets a lot up and try and give different looks with the trap. It’s going to be a road game so maybe you can throw 4-5 different looks throughout the game, whether it’s trapping from the weakside, strongside, fake a trap, etc.

Will the WCC be a 2-bid league?
What I think the premier battle out West right now (out of any western conference) is happening tonight. Gonzaga goes to San Francisco. The Dons are flirting with a possible at-large bid, but really need a win over Gonzaga to feel good about it. There’s a chance because of Frankie Ferrari and his ability to control tempo at the point guard spot. However, the major concern you should have if you’re a San Francisco fan? Can they take advantage of Gonzaga’s weakness? You beat Gonzaga by trying to go at Rui Hachimura defensively (he’s still figuring it out) and ISO Josh Perkins and Zach Norvell. Ferrari can probably do that with Perkins, but then what? A 10pm tip, I highly suggest tuning into this game.

Speaking of battles out west
The Mountain West’s best chance of getting 2-bids is probably Nevada and Fresno State (who just smacked Utah State, who was considered the 2nd best team in the MWC). Nevada lost to New Mexico and then struggled in the first half against San Jose State. We saw them mess around with the starting lineup moving Caleb Martin off the bench. Fresno State wants to slow the game down and then beat you by shooting threes on offense. Keep an eye on how Nevada starts this game.

What the hell is this Florida team?
Florida was a borderline top-25 team coming into the year. I thought they would end up being the 4th best team in the SEC and in the top-25 for the majority of the year. But, they sit at just 9-5 with a home loss to South Carolina on the resume. Jalen Hudson is shooting just 23% from three. It’s been a weird year there. They get a chance to really bolster that resume today though by hosting Tennessee. When you think of Florida you probably think of the offense. The spread you out, get quick shots up. However, they are really a great defensive team. They want to turn you over, wear you down and do a great job protecting the rim. However, Tennessee takes care of the ball. A win by Tennessee helps keep them in the drivers seat for the SEC, a win by Florida helps with seeding.

Can UNC keep the momentum after the NC State win?
UNC returns back to Chapel Hill today to host Louisville. The Cardinals are coming off a bad road loss to Pitt. What we’ve seen so far from Chris Mack’s team is pretty good offensively and struggles at time defensively. He’s still trying to implement his scheme, which is typically the packline and then adjusting when necessary. That’s what I’m curious to see today. I don’t know if the packline against UNC is the best defense. Keep an eye on Cam Johnson, who left the NC State game with a knee injury though it was reportedly just cramps.

Can Baylor catch another top Big 12 team at home?
Baylor caught Iowa State earlier in the week. This time they get Kansas. We know what Scott Drew is going to do. He’s going to run that 1-1-3 zone that morphs into a 2-3 as well as a 1-3-1. It’s really fun to watch as the game goes on. Kansas isn’t a great shooting team. Yes, Lagerald Vick can get hot. Same with Quentin Grimes. But you want to limit how many touches Dedric Lawson gets in the midpost and low post. We have seen Kansas move more towards that 5-out offense though, especially with the pulled redshirt of Ochai Agbaji.

Battle of Big East stars
We all saw Markus Howard treat the Creighton game like a video game. He finished with 53 and is absurd with his ability to create space with that little crossover, stepback move he has to get enough time for his jumper. Today he goes up against Myles Powell, who has emerged as a Big East Player of the Year candidate with Howard and Shamorie Ponds. Powell also has the ability to just catch fire. We saw him do that against Kentucky when he hit six threes in the second half.

Can Ole Miss get a signature road win?
Ole Miss got a signature home win when it beat Auburn earlier this week. Now they head on the road to play rival Mississippi State, who lost at South Carolina. Ole Miss does have a good record, but beat up on bad teams to get there (until the Auburn win). They also don’t have that bad loss, so it’s tough to say exactly who this Ole Miss team is. They have a star in Terence Davis. Mississippi State has a handful of guys they can go to in Aric Holman, Lamar Peters and the Weatherspoon brothers. If Ole Miss wins this game, it’s time to start looking at them as a top-3 or 4 team in the SEC.

The top half of the Big 12 shaking itself out
There are two Big 12 games to keep an eye on. TCU at Oklahoma and Texas Tech at Texas. All four teams are probably in the top-half of the Big 12 along with Kansas and Iowa State. TCU needs Jaylen Fisher to play as he missed the Kansas game with an injury. If he doesn’t, Oklahoma’s defense can really bother TCU. For the battle of Texas, can a Longhorn stop Jarrett Culver late in the game? Culver has been unbelievable this year, especially in high ball screens. He’s sort of taken over for Keenan Evans in that sense.