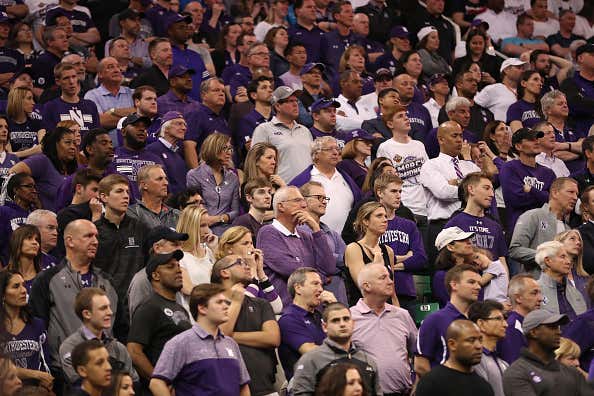 [Chicago Tribune] -After receiving complaints from both fans in the arena and television and radio partners after Sunday’s game against Illinois, NU officials asked her to tone it down. Or more specifically, to turn it off.

“It caught me a little by surprise. Because I’ve been doing it for the last 3½ years.”

Harriott is the president of the Northwestern student section, and has been unleashing he screech to try to prod both her fellow fans and the team she supports to another level.

“It gets their attention; some of the kids are on their phones and not dialed into the game. Plus enough people say it’s annoying, so I figure it must be annoying to the opposing team. I’m not the sixth man, but I try to be the 5½ — half a helpful person.”

I’ll be honest here. Typically I’m all for fans doing what they want. But, there’s nothing worse than watching a game on TV and there’s that one fan that you constantly hear just screaming and shrieking. It’s the worst. It’s not a funny bit. The shtick sucks.

So shout out Northwestern. You’re doing all of America a favor when we’re forced to watch your games. We now don’t have to deal with listening to someone who thinks she’s more important than she is ruin the viewing pleasure. Instead we can watch the 125th ranked offense ruin that.

I mentioned the Curse of the Billy Goat. Harriott hopes Northwestern doesn’t suffer a similar fate after muzzling her.

“I will admit,” she said, “to being a little superstitious.”

Ah, yes, who could ruin the amazing program known as Northwestern basketball? I mean that whole 1 NCAA Tournament appearance, that’s going to get ruined now because we don’t have to listen to someone claim they are the 5 1/2 man shriek all over the TV.

So here’s just a little plea from someone who watches way too much college basketball. Stop the shrieking. This is a bigger epidemic than the transfer epidemic people love to talk about. Just let me watch the game in peace with you doing chants and booing.

I know this might be shocking but I can’t believe this isn’t the shrieker: