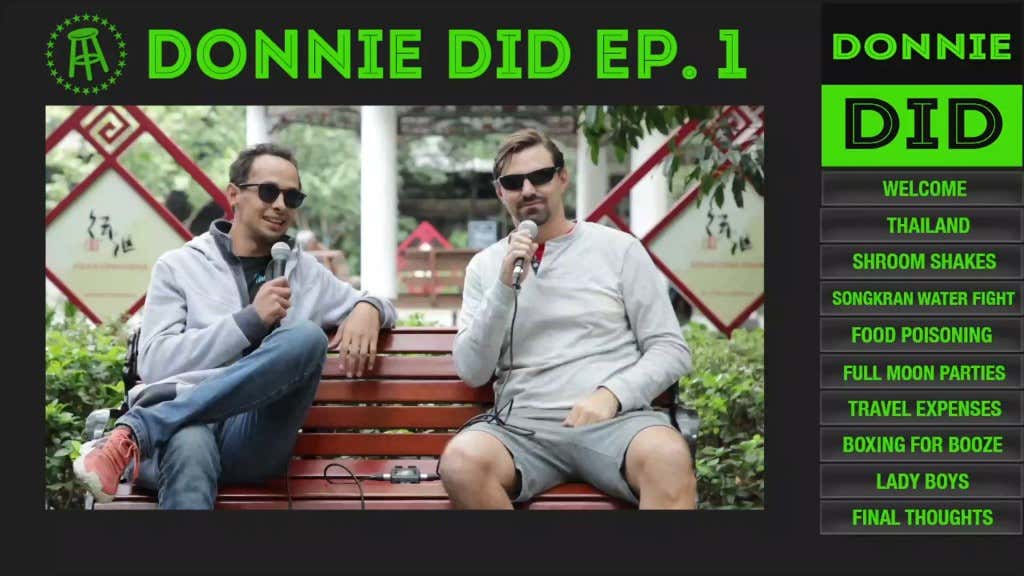 When I got hired by Barstool, I told them I’d be happy to pump out two videos a week for the fans, but if they ever wanted me to get in the podcast game, the viewers would have to pay extra for that shit, as I spit hot fire on the mic. They obliged. No seriously, I was asked to contribute to Barstool GOLD and I thought this video podcast would be a great place to start. In most of my videos, I don’t get a chance to ever give people much of a backstory or  a behind the scenes look at what is really going down. Also, I’ve gotten wrapped up in a bunch crazy shit abroad that I haven’t been able to capture on camera that I think you guys would be interested in hearing about. The first episode focuses on some of the shenanigans I’ve gotten into down in Thailand as well as the time food poisoning almost killed me in the Philippines.

I’m still trying to get the hang of just talking about myself for a half hour but I’ve already recorded four pods and have gotten better each episode. Here is a list of some of things I’ll be addressing in future episodes

– Why I used to have a pet duck (Duck Rivers) and a pet goose (Gucci) and what happened to them.
– Every time I’ve had a run in with police in China.
– Creepiest places I’ve been in Asia
– Most awkward filming experiences
– How do I balance being funny and being respectful to local cultures.
– The entire TRUE story behind my smash hit song YABA
– Why I moved to China and how I got my start making videos
– Every absurd story I have from my years as an english teacher in China
– The time I got hired as a professional rapper.
– Q and A sessions where I’ll be answering DMs from viewers.
– and much much more.

If this seems like something you’d be interested all I ask is you sign up using the below link as then I’ll actually see a little bit of the money and it all won’t go to my corporate overlords.

And if times are tough and you can’t afford GOLD at the moment, don’t worry, I’ll still be putting out my two videos a week as usual on the blog and social media.

Thanks to everyone who’s been following my journey so far. Catch ya on down the trail.