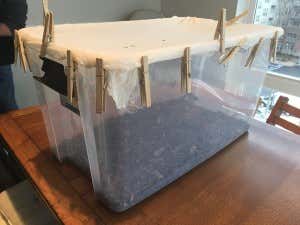 SOURCE-A Virginia veterinarian is experiencing a nightmare after Christmas as dozens of unwanted critters are roaming her home. More than 100 praying mantises hatched from an egg case hidden under the branches of the Christmas tree Springfield resident Molly Kreuze bought for the holiday season, ABC Washington D.C. affiliate WJLA reported.

The term “Critters” is like the N-word for my kind. Adding “unwanted” to it just sounds like someone from Alabama wrote this article. To hell with them critters we say! I’d imagine this horrifying day like the scene from Alien vs Predator when those rodents hatch from the eggs in the sacrificial chamber. Instead of planting their meat in humans faces, they just made themselves at home.

When asked whether she’s seen any praying mantises in the bedroom, Kreuze said, “I don’t want to think about that.

That’s usually every girl’s response to me when I ask them what they are doing later.

Instead of vacuuming them up, Kreuze has been using an envelope and shoe box to store the mantises.

Vacuuming? I’d rather just take the stomping and yell Godspeed to the other 99 homies! I hate going on water slides and roller coasters and can only imagine the experience of getting suctioned into a tub and getting shredded by a fan. I’m glad she chose to treat them like prisoners of Auschwitz. Free the family.

“In my googling, I discovered people really like praying mantises,” she said.

Yeah, no shit! I can understand people searching me online and not liking me. It’s not what’s on the screen that matters. I can’t get you laid but I can at least make your day?  On God.

The exact first words my parents told the doctors. At least she was honest. This is why you have to get a fake Christmas tree for the holidays. You don’t have to worry about your dog drinking all of the water, think about any insects living in them, and raising a farm full of mantises.

You know what I would do if I was neighbors with this lady? I would take these harmless critters (I can say it, you can’t) from her, save them for Easter, throw them into some Easter eggs, make a nice basket, and let it sit on her porch. Hell, I might just do that for Easter this year. Happy early Easter.