This clip may be two years old and already blogged by Feits way back when, but I’ve already started typing and unfortunately there’s nothing that can be done to stop me at this juncture.

I hope the reporter who wrangled up these three individuals to be interviewed now works for 60 Minutes or some other esteemed news program because I don’t believe three better sound bites have ever been assembled in the history of media. I’d never even heard of Shamokin, Pennsylvania, until this morning and after this clip I feel fairly confident I know exactly what’s going on in Shamokin, Pennsylvania. And just thinking about Shamokin, Pennsylvania, has driven me into a deep despair, one I likely wont climb out of for some time.

For starters, there is a Turkey Hill there. And boy oh boy do their donits stink out loud. Just a complete affront to the donit game taking place at the Shamokin Turkey Hill.We’re all just trying to deal with it but it’s really turned this town on its head. Why DD had to burn down and not that Turkey Hill is a true tragedy this town likely still hasn’t recovered from.

Speaking of arson, this fuckin’ guy. 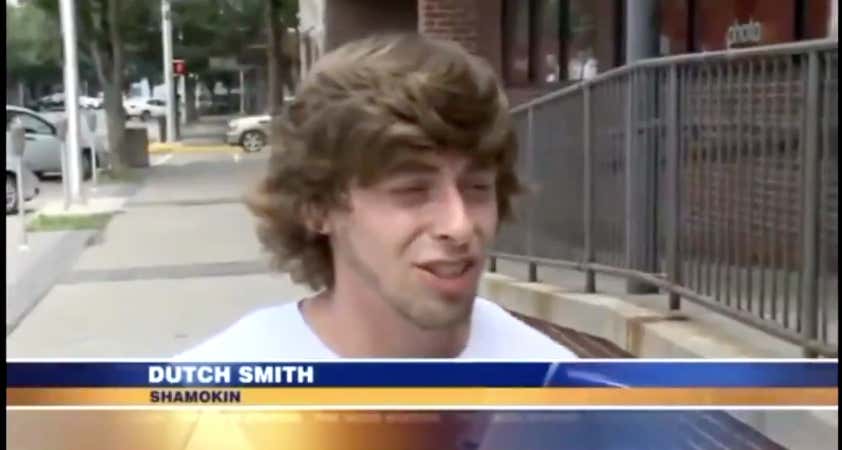 I don’t know if an investigation was ever launched or completed by Shamokin PD, but Dutch Smith would be on my short list of suspects. Not that I think he intentionally burned down his lawyer’s office, but as a student of Lionel Hutz I understand how dumpster fires can get out of hand. One second you’re just trying to rid the Earth of some evidence, the next you no longer have an establishment to sell percs out of the bathroom. It can happen that quickly.

As for the cold coffee lady, I’m going to do the unthinkable and say I completely fuck with her vision. It is cold coffee. She’s not wrong in the slightest no matter how loudly she yells it. Regular coffee is often known as hot coffee. Why does the ice get so much of the credit for cold coffee? Shamokin isn’t often known for its innovation but change can come from the most unsuspecting of places and henceforth I will only be referring to coffee with ice in it as cold coffee. *bangs gavel* Case dismissed.