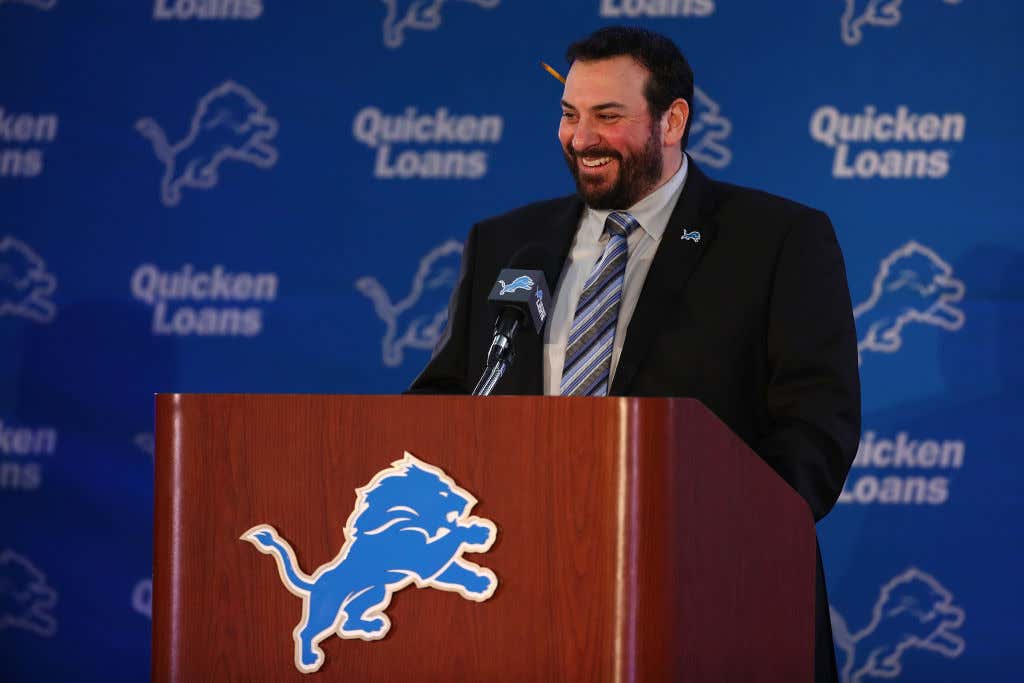 PRO FOOTBALL TALK- The Lions hired new head coach Matt Patricia last year without doing a background check, which would have revealed that Patricia had been indicted for aggravated sexual assault in 1996. Lions General Manager Bob Quinn, who hired Patricia, has kept a low profile since that news surfaced. But today Quinn addressed the issue, and denied that he came up short in researching Patricia before hiring him.

At his end-of-season press conference, Quinn said that background checks aren’t his department, and he sees no reason he should have known.

“I’m not paid to do extensive background checks,” Quinn said.

Well… ya kind of are. Part of Bob Quinn’s job is to hire people, and along with that comes finding out any information that may or may not be pertinent to who that person is or was. To be clear, Patricia was not CONVICTED of aggravated sexual assault and instead INDICTED, but that’s something an organization should do it’s due diligence to uncover. Not so they don’t hire them – as he was not charged – but so they can prepare ahead for questions that may (and did) come. So they can know the truth inside and out and prevent surprises from occurring.

Background checks are just part of the basic protocols for major positions of importance. The Lions (along with the Patriots) had no idea Patricia was ever even indicted for sexual assault, or arrested for that matter. Had they conducted a background check, the arrest would have certainly shown up and they could have uncovered this matter and gotten out in front of it. In fact, a simple Nexis search could have surfaced this arrest.

Instead today, at the Lion’s end-of-year media session, the media got answers they’ve been waiting for since the news first surfaced in May.

Reporter: “Bob, when did you know about Matt Patricia’s sexual assault allegations? When did you know?”
Quinn: “I didn’t — I first found out about it a couple days before the article came out. Matt had got wind that the article was going to come out and he came and told me. So we had extensive conversations with myself, ownership, Rod, about everything, and then we put out that statement back in May about our support for Matt, and that’s kind of how it went down.”

If you’re Detroit, aren’t you at least a little perturbed that such an allegation exists and that your new head coach didn’t bring it up at any point? Once you’re in a high position of power, the media will and does uncover any little secrets you may have hidden. It took the Detroit News like 2 secs to find that information out- why would Patricia not bring it up? He had to have known it would come up. The case was dismissed and he maintains his innocence, but now it’s become a dark cloud hanging over the organization.

Reporter: “If you knew beforehand would he still be your head coach today?’
Quinn: “Yeah, I’m not going to deal in hypotheticals. I didn’t know at the time and going forward we’re just going to stand by our statement.”

This answer is quite different than the Lion’s President, Robert Wood, initially gave: “I am very comfortable with the process of interviewing and employing Matt,” Wood said. “I will tell you with 1,000-percent certainty that everything I’ve learned confirmed what I already knew about the man and would have no way changed our decision to make him our head coach.” Quinn doesn’t sound nearly as confident in the hiring as Wood did.

Reporter: “Does it bother you that you didn’t know before? That he didn’t reveal that to you?”
Quinn: “No, that’s — listen, we do our standard — for a high-level position we do an extensive background check on everybody and nothing came up so that’s kind of how we do those processes.”

Reporter: “How could it not come out if somebody else found it quickly when they were searching his name?”
Quinn: “Well, that’s — listen, I’m not paid to do extensive background checks. I’m here to select the head coach. I’m very comfortable with Matt Patricia as our head coach.”

Quinn should have just admitted he fucked up and moved forward with this. Patricia wasn’t convicted, the main problem here is that not one person is taking accountability for not doing their job properly. Instead the media is unraveling layers of information and lies, and it’s not a good look for the Detroit Lions.