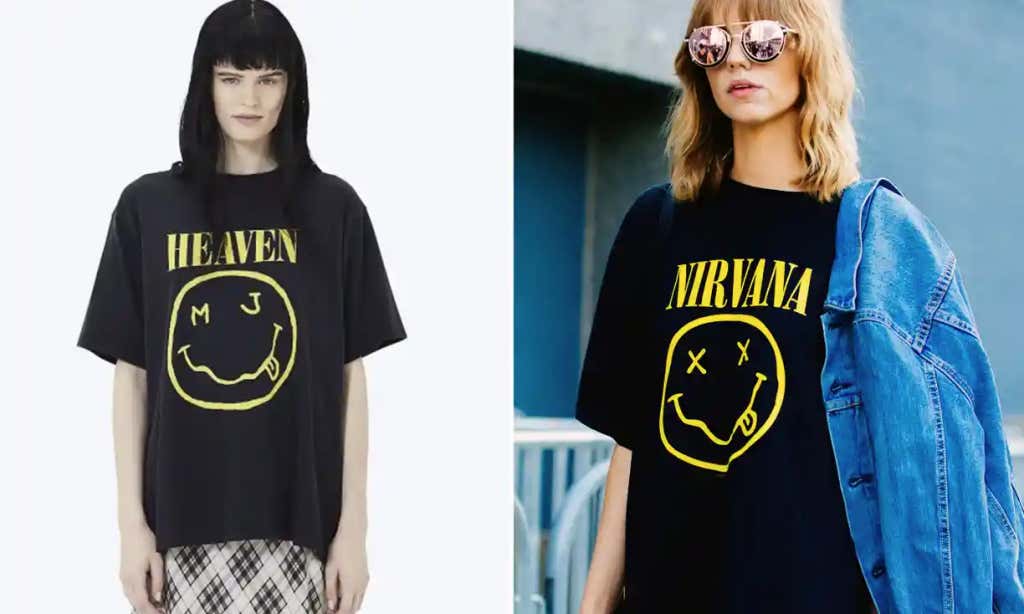 2019’s off to a bit of a slow start news-wise, but that ain’t gonna stop the gears on the blog wheel from turnin’. Let’s talk about Nirvana and Marc Jacobs, I guess!

Representatives for the group, which split in 1994 following the death of frontman Kurt Cobain, claim that Marc Jacobs’ unauthorised use of “Nirvana’s copyrighted image on and to promote its products is intentional”. The suit claims that the use of Nirvana’s iconography, which the group has used since 1992, is to “make the ‘Grunge’ association with the collection more authentic”.

A representative for Nirvana said Dave Grohl and Krist Novoselic had no further comment. The Guardian has contacted representatives for Marc Jacobs.

So I’m no Mike Portnoy Esq., but I’ve watched my fair share of ‘Law and Order: SVU’, and this case appears to be pretty cut and dry. I mean…

And coming from a company that’s received many a cease and desists in the past – that’s gonna earn ya one!

It’ll be interesting to see how if at all Marc Jacobs tries to spin this, because if you read on a bit further, you’ll see just how little ground they have to stand on.

The suit also cites the use of Nirvana references in Marc Jacobs marketing materials, including a meme posted to the brand’s Tumblr account featuring a clip of the group’s 1991 hit, Smells Like Teen Spirit, and an image of Jacobs wearing a T-shirt above the words Come As You Are, the title of a 1992 hit by the trio.

It would be hard for Jacobs to argue that the image is not a reference to Nirvana. “This exclusive piece from the 1993 Grunge collection was created by Marc Jacobs during his time at Perry Ellis. This bootleg smiley tee sure smells like teen spirit,” reads the product copy for a smiley face t-shirt on the Marc Jacobs website, referring to the Nirvana song “Smells Like Teen Spirit.”

I understand that this hasn’t necessarily been the most interesting blog you’ve ever read thus far, and that won’t change going forward, but it’s so rare that I get to speak on my culture being appropriated, as a straight white male. Now that I’m doing just that, I’d like to say – fuck you, Marc Jacobs! Shit like this is the reason we see Kendall and Kylie Jenner walkin’ around in Nirvana shit, causing Kurt Cobain to just restlessly roll over in his grave. Let the man rest in peace! They’re probably unable to even tell ya what ‘Smells Like Teen Spirit’ is, yet I’ve been opening up Instagram every day for the past few months and seeing all of the kids who used to make fun of me for wearing rock n’ roll shirts to school in seventh grade lookin’ like grunge bands from the 90’s. Literally. I hate it.

I’d never actually challenge anybody on this, but if you’re gonna wear a band tee, know at least three songs by them. I’m not asking a ton. I’m not even asking an album outta you. Just be able to name three tracks. I think that’s fair.

P.S. Twisted Sister is also in a sue-off with some Australian politician who parodied “We’re Not Gonna Take It” in one of his campaign ads. They threatened to sue him, he threatened to sue them, it’s a whole thing. If you’re interested, read more about that HERE.