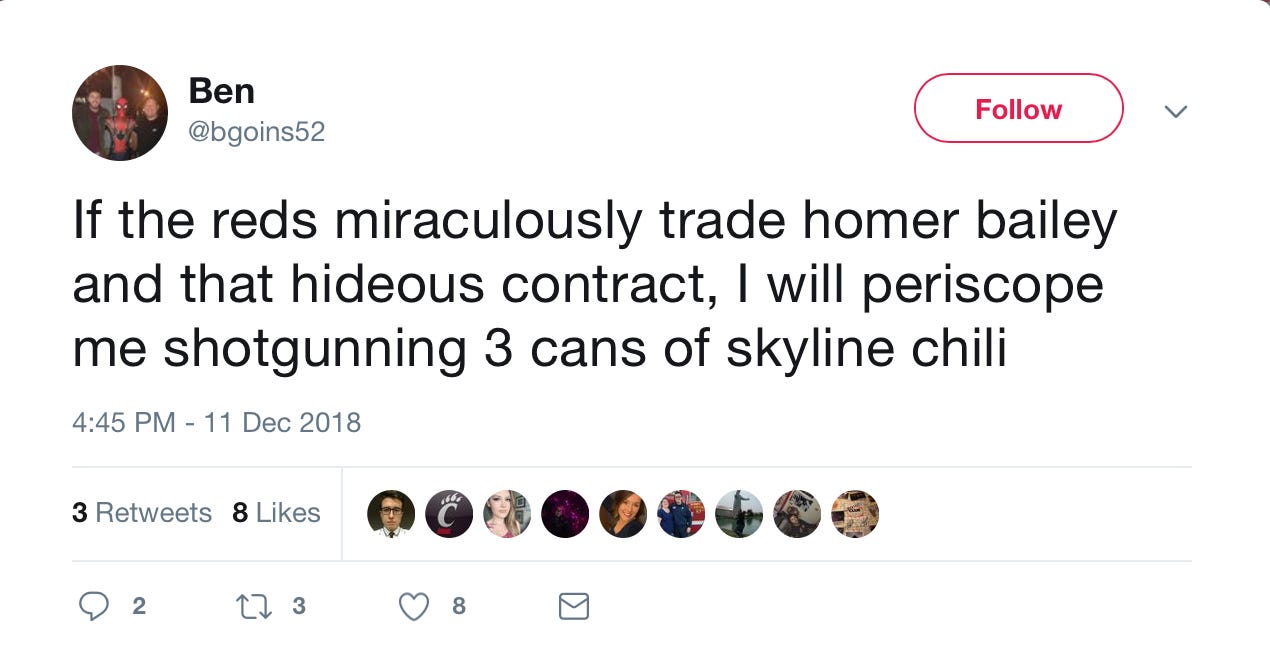 equals
https://twitter.com/bgoins52/status/1078161400818737157?s=21
Jesus Christ. I thought I had seen it all, but here we have Ben from Cincinnati saying he will shotgun cans of Skyline Chili, which Midas whale just be mud water, if the Red managed to trade Homer Bailey and that disgusting contract. Well lucky for him the Reds obliged and shipped Bailey out to Los Angeles. Ben here is a man of his word and took to twitter to prove it.
He grabbed 3 cans of "chili", a pocket knife, his Reds gear, his cellphone, and the rest is history.
The way that chili dripped out of the top of the first can set the tone, this was not going to be something we enjoyed watching. I love chili just as much, if not more than the normal person, but that is not chili. Chili is not brown. That looked like sludge. It seeps from the top of the can as Ben pokes a hole in the bottom with a pocket knife, I was certain he was going to miss the can and jam the dull knife into his wrist. He puts it to his mouth and just starts slurping.
I'm a little suspicious of how quick that first can went, unless it was like straight water, which could have been the case, but I'd assume there are some chunks of meat int he can? Idk if its warm or not, but if its not warm then wouldn't it have kind of been clumped together? Idk, I don't really want to think about that. I'll hear that slurping sound in my nightmares tonight, god damnit it's gross, especially when you realize that its that gross chili he's dumping down his throat.
He doesn't even make it to the second can before his body begins to reject the chili. He starts coughing it up and throws up a little. I could only imagine what that tasted like coming back up. The way he smashes his face against the can and sucks it out is like a newborn piglet nuzzling up to the mother pig's nipple, straining to get every ounce he can out of it. When he puts that second can down it def sounds heavy like theres still some stuff in it, so at this point it's clear he isn't cleaning out the can.
Third can goes down nice and smooth, almost too smooth. The slurping sound is back, he finishes the can and plants it on the table. 0 mess on his face, 0 chili spilling from his gullet, I'm just suspicious about this all. If you're shotgunning Skyline chili it is not going to be a clean process. I was expecting throw up. I was expecting chili running down his chest. I was expecting blood. I was expecting tears. I got none of that.
I can only imagine the diarrhea this guy had the following day. I'm sure there were some adult sodas involved in this activity, because lets be honest, you have to be a little drunk to eat that chili. But I'll give this guy credit because he kept his word, but I kept waiting for more to happen, and it didn't. Maybe I had my hopes he would fully projectile vomit three cans of chili all over the place. Sigh.