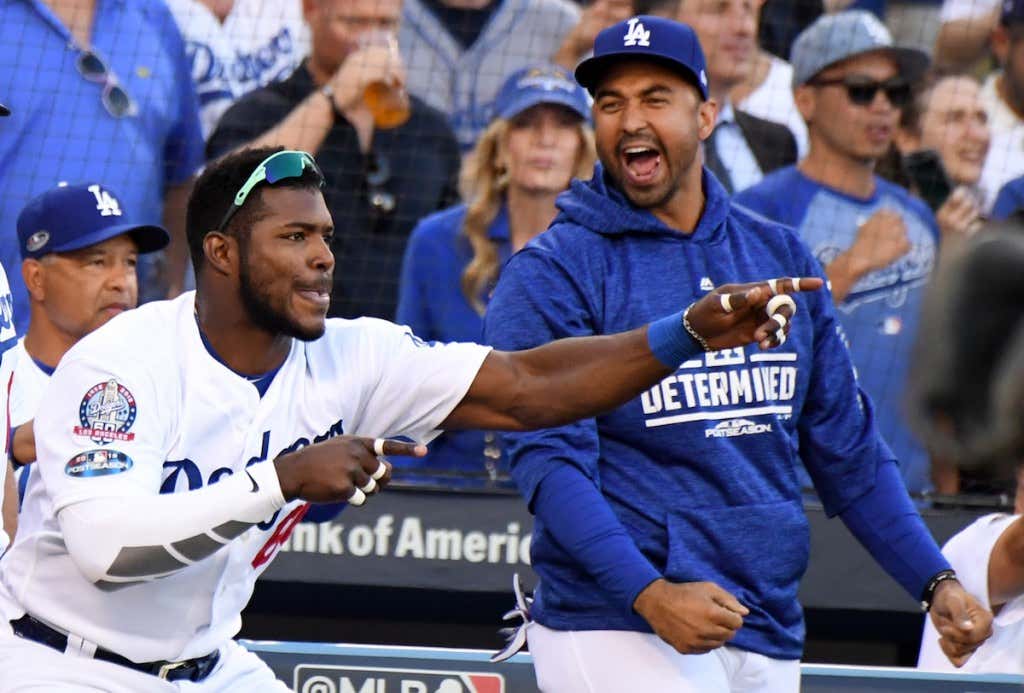 WE’VE GOT A LIVE ONE OVER HERE! After a fairly uneventful offseason to this point, we’ve got a big trade going down while everyone else is mailing it in trying to make it to five o’clock on the Friday before Christmas.

I mean, this headline might as well say, “Bryce Harper to the Dodgers,” no? Seems like that would be the next domino to fall after LA just sent their starting right fielder, a handsomely paid fourth outfielder, and an All Star pitcher to Cincinnati for a pitcher that they plan to release. This, of course, is all to create some financial flexibility that would allow them to back up the money truck for a certain generational superstar talent in Harper.

Now, we wait. With the open spot on the depth chart and the ability to write a check that will appease Scott Boras’ client, is it just a matter of time before we see Harper donning Dodger blue? There are other routes that LA could take with their newfound financial wiggle room, but all signs point to a full court press to bring Harper and his Hollywood hair to the city that it was seemingly destined to be in.

A couple thoughts here on the guys going to Cinci, though — I’m happy for Matt Kemp. This was a guy who earned this opportunity. And while I’m sure he’d rather play for a contender, I’m also sure that he’s thrilled about the idea of getting to be an everyday player again versus a role player with the Dodgers. At 34 years old, he’s not quite over the hill just yet. But we’re talking about a guy who went from being called out by his GM in Atlanta for being out of shape to a guy who dropped 40 pounds and put up a .290/.338/.481 slash line in 506 plate appearances last year. Good for him.

Hey! The Dodgers finally traded Yasiel Puig! If it feels like they’ve been trying to do this for the last five years or so, it’s because they have been. It’s weird, because I don’t think that I’ll look back at the Puig Era in LA and chalk it up as a failure, and I also think that “disappointment” is too strong of a word to apply. There were highs and there were lows, but those lows made quite a few headlines. And books, too.

When I reflect on Puig’s time with the Dodgers, I’ll ultimately acknowledge that he fell short of my expectations and probably yours, too. But that doesn’t mean that he wasn’t an impact player there, because he absolutely was. We’ve often theorized that Puig would be the perfect “change of scenery” candidate. How many times have we heard that? But I do think that he thrives in the spotlight. We’ve seen it in each of the last two postseason runs for the Dodgers. And while he finally might be getting that change of scenery, I can’t imagine that we’ll see Puig break through that glass ceiling in a market like Cincinnati. At least, not with the direction that franchise is headed in. I would hate to look back at Puig’s career and think of him as a “what could’ve been” player.

I don’t have a ton to say about Alex Wood, really. Very good pitcher when he’s healthy, but he’s struggled with staying healthy forever. It’d be cool to see what a full season of a healthy Alex Wood looks like, and with him going into his age-28 season next year, I suppose there’s still time for that to come to fruition. This upcoming season will also be the lefty’s last season before hitting free agency, so perhaps that will be a driving factor behind the first 200-inning season of his career.

But let’s circle back to the main point here — Harper to the Dodgers. After a move like this, if Harper were to then sign elsewhere anyway — let’s say, the Phillies — I would imagine that would be the equivalent of proposing to a girl and then not only does she say no, but then she fucks a random dude at the bar that night. And then they get married. That would be tough if you’re the Dodgers.