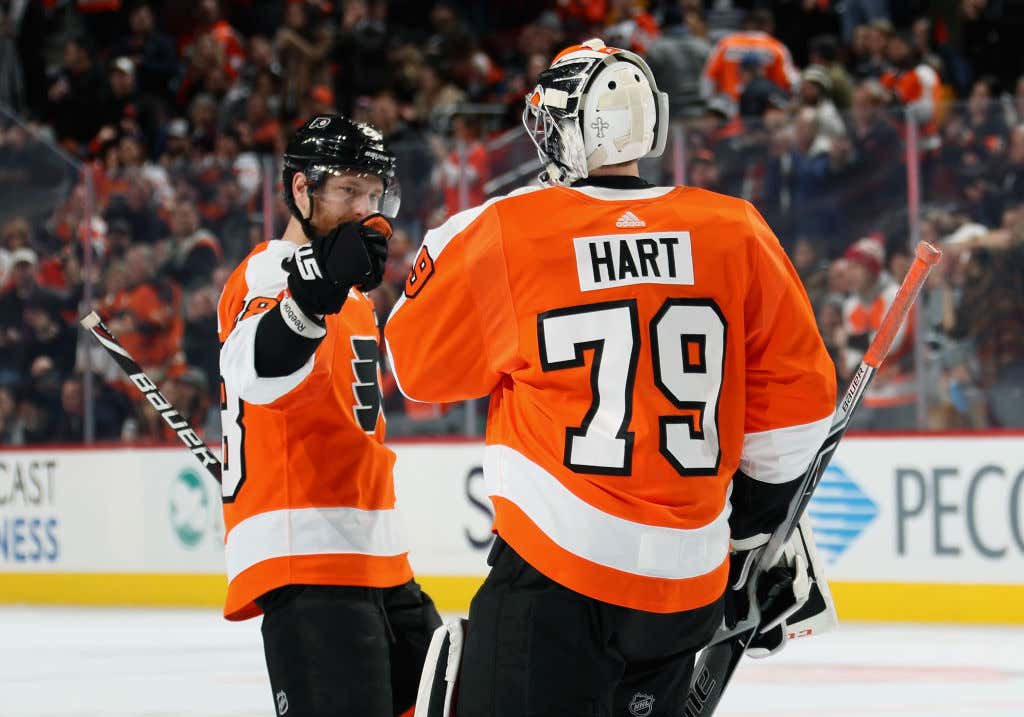 Last night was the exact type of game for the Philadelphia Flyers that can turn around an entire franchise. The Flyers were hit with 22 penalty minutes as opposed to Nashville’s 8. Every single ticky tack call you could possibly throw at the Flyers’ was getting called but then Sean Couturier gets completely bundled from behind by Ryan Johansen and the ref is essentially laughing in Couturier’s face about it while calling nothing.

A 20-year-old goalie making his 2nd career NHL start. An interim head coach in just his 2nd game behind the bench. An organization that has already fired their general manager and coach this season. Has already gone through 6 different goalies before Christmas. They weren’t getting an ounce of help from the officials. And they still managed to come away with a greasy win against one of the better teams in the West. It’s the type of game that really builds an “Us Against The World” type of mentality in the locker room. For a team that looked broken and disengaged for much of the season so far, this was the type of game that brings a team together and can make them dangerous moving forward. To steal a phrase from their neighbors across the street, “We all we got, we all we need”. That type of mentality can be a weapon moving forward and even though it’s only been two games in the post-Hakstol era, this team seems to be buying into that culture.

And maybe the most important part of it all–the fans are starting to buy into it as well. The past 48-72 hours has been the happiest and most optimistic I’ve seen this fanbase in quite some time. When the Flyers end up taking 3 penalties within the span of 60 seconds and are forced to kill off 3:33 straight minutes of 5v4 and 5v3 power plays, I didn’t see too many people coming out and saying shit like “lol same old Flyers” or “here it comes” or anything like that. From everything I saw on social media combined with how loud the Wells Fargo Center was buzzin, this fanbase had faith in this team for the first time in a while. And how could you not be supportive of the squad when the boys are grinding their dicks off out there on the kill?

When I think of some of my best memories of a Flyers fan, I think about the times during the Richards era where the PK was maybe the most dominant part of that Flyers’ team and the fans respected the hell out of every single kill. But here’s what I had to say about the Flyers’ penalty kill back in October when I was demanding an apology from the team.

Apologize for the penalty kill. That used to be the heart and soul of the Flyers. It didn’t matter if they took penalties because they had guys on that team who would work their fucking asses off to kill it. The Flyers used to be a team who could be on the penalty kill for 60 minutes a night and it wouldn’t change a thing because guys like Mike Richards would be out there grinding away for every second he was on the ice. The penalty kill now?

Lazy cowards who just leave guys all alone on the crease. Killing penalties takes heart. It takes grit. It takes a set of fucking balls to get out there and give that power play nothing to work with. Killing penalties is what the city of Philadelphia is all about. It’s not fancy, it’s not flashy, but it’s about getting the job done. This penalty kill? It’s a disgrace. It’s shameful. But Ian Laperriere still has a job because Ron Hextall is too stubborn to admit he made a mistake.

Last night was the first time in years that I’ve felt that same type of energy for the Flyers PK as I did back in the Mike Richards era. I get that the Predators didn’t have all their guys healthy last night and their power play was missing Forsberg and Subban. And I get that statistically, they have a bottom tier power play this season. But if you actually watched the game and you watched how the Flyers were killing penalties out there and how many times the boys were sacrificing the body to make a play, then you know they didn’t just get lucky. And to me, the effort out of the penalty killers last night–especially with Ivan Provorov being off the ice for 12 minutes–was the highlight of the game. This picture right here pretty much says it all. 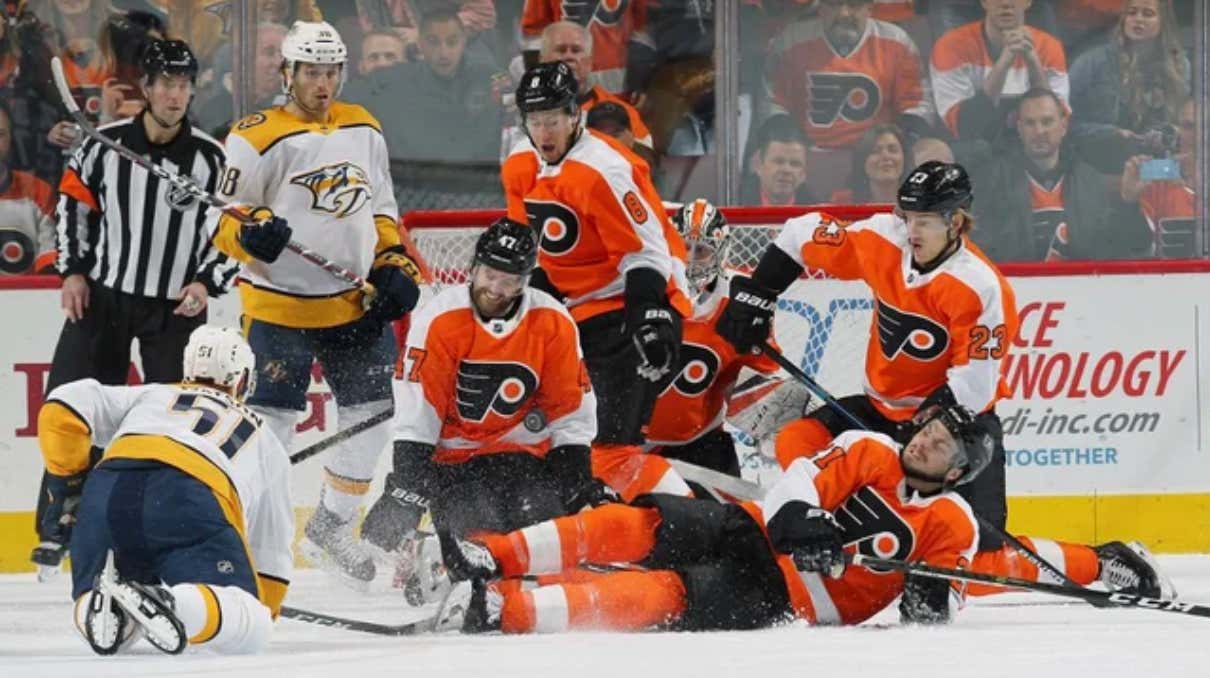 Great Show From Start To Finish

I think we knew as soon as it was Hartsy night that we were in store for a show. Any time you can bring that absolute beaut back on the ice at the Wells Fargo Center, you know there’s going to be a little extra juice in the barn. And then when we got to witness the most competitive ceremonial puck drop in the history of the NHL?

That set the tone for the whole night.

It was going to have to be an extra greasy effort by the boys to junk that game up a bit and slow down the Preds. And they did exactly what they had to do. I mean it wasn’t necessarily the prettiest game of all time. There were long ass stretches of the game where both teams had no other option but to just stick to the dump&chase. I’m pretty sure there were a couple different times where we went at least 6 or 7 minutes without a whistle. But how the Flyers were able to do that was by playing Hard Dick Hockey™?. I thought the team defense out there looked great. They did their best at keeping Nashville to the perimeter. They junked some things up in the neutral zone and didn’t allow the Predators to have too many clean zone entries aside from that tough stretch in the 2nd period. They limited their turnovers and did a pretty solid job of clearing the puck out of their own zone for most of the night. Like I said–it wasn’t the prettiest game of hockey you’ll ever see but it was greasy and it’s the exact type of hockey that Philly fans get off on.

Speaking of greasy, let’s talk about the Flyers’ 2 goals from last night. Now both goals ended up being some pretty tasty highlights but it’s the gritty shit that really started the party. Like take Voracek’s goal for example. Obviously when you watch this goal, you see a nasty play from Couturier to be able to handle that rebound and still have the awareness to find a wide open Jake Voracek on the back door for an easy tap in.

Don’t get me wrong, it’s a sick play from Coots. But this goal doesn’t happen without Couturier grinding his ass off along the boards a few moments earlier to get that possession going.

Wins the battle for the loose puck. Bullies Johansen around a little bit. Controls the puck. Gets it up to the point and a few seconds later it ends up in the back of the net. It’s those little things that the Flyers have been doing right the past 2 games that then build into big things. And then we had Giroux’s goal in the 2nd which only happens because Travis Konecny is a sneaky little bastard in the neutral zone.

Again it’s just all these little things that good teams do right which end up turning into big moments. I don’t know if it’s because the Flyers feel the need to pick up their game to help Carter Hart get adjusted in net. I don’t know if it’s because the Flyers just tuned out Dave Hakstol completely and now that they have a new voice behind the bench in Scott Gordon, they feel like they can play the way they want to play. It’s probably a combination of both of those things, if we’re being honest. But whatever it is, it’s working for the Flyers right now. They are a fun team to watch, they work their asses off, they have what appears to be a future phenom in net, and you can tell that they’re playing as a unit right now. That game last night was won in the trenches and that’s the type of hockey this city loves to see. And it’s showing with the overall mood within the fanbase right now.

Are the Flyers back? Who knows. But at least they’re fun to watch at the moment.

– In case you’re wondering where all the Carter Hart praise in this blog is, he got himself another solo blog last night. So go check that out if you want to hear about how proud I am of my son.

– Fuck that officiating crew. Sensitive pricks had it out for the Flyers after Ivan Provorov politely asked the ref to get his greasy paws off of him.

If you don’t want Provorov to shove you then maybe keep your hands off of him in the first place.

– To all the haters and losers.