Dearly beloved, welcome back to the Church of Chief. I am here to provide comfort and a place for you to ask grand questions about the organization in these darkest of times. People forget that I am a real live ordained minister.

Minster’d the fuck out of Carl’s wedding 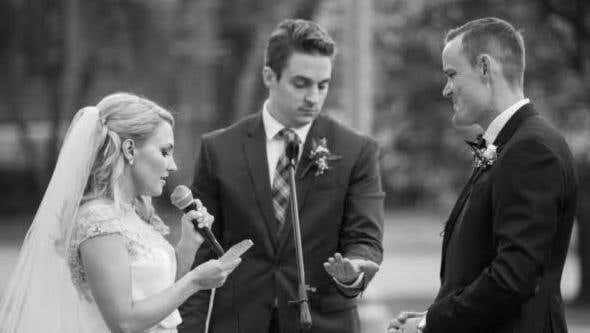 Know when to be serious, but also had the whole audience cracking up. Not to brag 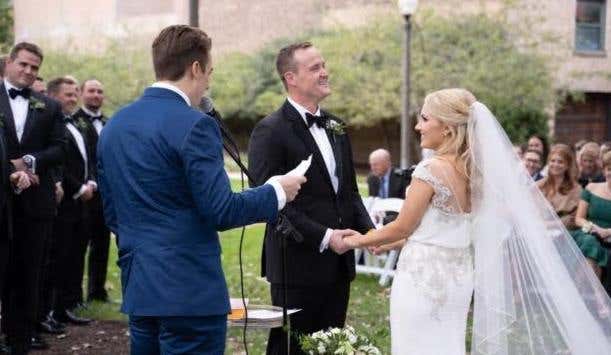 (credit to me for not mentioning my hair)

So you’re in good hands. This is a safe place. Let’s all just sit back and discuss the most pressing questions. Thanks to everyone who sent in questions, sorry if I didn’t use yours.

Colliton is a good place to start because I don’t think I’ve been perfectly clear with my opinion about him. I will say that he’s not my style of coach. Or at least, from the outside, doesn’t appear to be. When I played hockey I usually preferred the hard-ass style. I’m like that in my own business and life. Just tell people the truth and then they need to do their jobs. So no, the coddling style and softer communication of Colliton doesn’t jive with me because it doesn’t jive with my general world view.

Having said that, I’ve now had multiple guys who have played for him in Rockford say he’s the best coach they’ve ever had. Knows the game, cares about his players, works hard, etc. I am sure that Colliton will have a LONG career as an NHL coach. The Blackhawks played the Jets and Paul Maurice last night and I would anticipate a Paul Maurice like career for Colliton. Which is a HELL of a career. He seems like a good person and all of that too. I want good things for Colliton and look, I am clearly not in the NHL or in the locker room. I don’t know everything or even anything about him. I can only judge what I see.

Now, I think it’s pretty safe to say that firing Joel Quenneville was the wrong move. Colliton could very well be a good coach in this league, but right now Joel is the BEST coach in the league. I don’t think it’s a coincidence that things got worse immediately after firing him. Colliton was brought in to fix special teams and get more out of the young guys. Well the opposite has happened. The powerplay is actually worse, the penalty kill is still bad, and Colliton is leaning more heavily on Toews, Kane, Keith, and Seabrook than Coach Q did while we’ve seen a regression of sorts from Debrincat and Jokiharju. So under the premise of what the stated reasons for the change were, the change has been a failure.

However, that doesn’t mean this is Colliton’s fault either. What’s he supposed to do, turn down an NHL head coaching gig, a few million bucks, and the opportunity to work with Toews and Kane? For sure not. The roster isn’t good. He might be in over his head. None of those things are his fault. They are Stan and John’s and they should be held accountable. The problem is that if Stan and John are held accountable at some point so then Colliton’s career(in the short term) will be collateral damage. I think we all want good things for Colliton and we want the Hawks to win and be good. It just doesn’t appear possible right now.

Obviously the top of the next draft is intriguing with Hughes, but lets leave the 2019 class out of this for now. We’ll also leave out Sikura and Jokiharju since they are currently on the team.

1) Ian Mitchell, defenseman, Denver. I love everything about this kid. He’s smart, he takes pride his game and WANTS to be great. It’s obvious. I think he will step in and be a top 4 dman in short order. He can help you in all situations and he’s a modern 200ft defenseman. Similar to Duncan Keith in a lot of ways.

2) Adam Boqvist, defensemen, London Knights OHL. Last year’s top pick. Can’t deny how good looks lately in the OHL. Racking up points after a bit of a slow start. I don’t think he will ever be as well rounded as Mitchell which is why I’m not as high on him as some others, but we will see. People always freak out when I say this, but I wouldn’t be opposed to trading Boqvist for a cost-controlled young forward who can play at the NHL level soon. The Hawks have Jokiharju in the show now, Mitchell coming soon, Beaudin and Boqvist right behind them. That’s a lot of young dmen and they’re committed long term to Keith, Seabrook, and Murphy as well. That’s before you factor in RFD guys like Hillman, Dahlstrom, Gilbert, and Chad Krys as BU…oh and Forsling. They have a surplus on D and not much cavalry coming up front. Boqvist has tremendous value and maybe you can snag someone who gives you roster balance.

3) Evan Barrat, forward, Penn State. The Hawks desperately need an energy type player and that’s exactly what Barrat has always been. I’ve blogged about him a few times now. He’s not overly fast, but he’s dominating college hockey this year and plays with serious sand. The Blackhawks need bite and skill in their bottom 6 and Barratt definitely will provide that at some point.

4) Nic Beaudin, defense, QMJHL. The Hawks other 1st round pick in 2018. I really like his game. It’s quiet. He knows when to jump in the play. He’s getting better defensively all the time. He’s a left shot. I could see him partnering with Jokiharju for years to come.

5) Philipp Kurashev, Forward, QMJHL. Russian father(Red Army era) but raised in Switzerland. Kurashev is having a MONSTER year for the Ramparts so far. He’s a very high-end skater, but a bit of a boom or bust type. Having said that if you produce and you can skate well then you have my full attention.

I’ve liked Strome more than I thought I would to be honest. I thought that trade was a win just because I didn’t want to build around Schmaltz going forward and commit big dollars to him. I think it’s clear at this point that Schmaltz was the best player in that trade, but we always knew that. Strome seems to have the right makeup so far. I think he can be a 2C on a good team, but if you can have him as your 3C then you are VERY good up the middle. He still young. He could get a half a step quicker and a bit stronger. Everything else is there.

I think the Hawks have adapted to Colliton. It’s about Jimmys and Joes, not X’s and O’s at this point.

I really have no idea. I think Stan should be on borrowed time as it is, but its impossible to know who is ultimately in charge. John could fire him, I suppose. I wouldn’t be totally shocked if Stan was fired after the Winter Classic. I don’t trust him to navigate another trade deadline and setup assets for next summer and the draft.

If I am John/Rocky, Stan has committed $7.4M to head coaches between what is owed to Q and Colliton. There’s no cap with coaches, but there is a real budget. Firing Q, Stan, and Colliton, then also having to hire their replacements…that’s a lot of money. We’ll see if they have the stones to bite the bullet and do the right thing. That gives me pause because Rocky is a Wirtz.

We will end on this one because everyone is on to 2019-20 at this point mentally. The Blackhawks will have money to spend. There is a lot coming off the books. If they’re also able to move Anisimov, Gustaffson, and Manning while replacing them with some of the prospects listed above and a top forward draft pick then they could be in REALLY good shape to make a splash and sign a Panarin level guy and maybe additional forward help. It’s a LOADED free agent class. Panarin, Stone, Duchene, Erik Karlsson, William Karlsson, Skinner, Kevin Hayes, Trouba, Teravainen, just to name a few. I think the frame work for a winner is still there for the Blackhawks. Toews, Kane, Keith, and Crawford are still elite level players. If Mitchell and Beaudin are ready, and they get lets say…Jack Hughes, Sikura takes a step, Strome takes a step, Jokiharju takes a step, etc…They could be back. Getting from point A to point…Z(?) well there’s a lot of ways to slip up and I don’t trust the current management group to resurect it. Step one: Fire Stan.