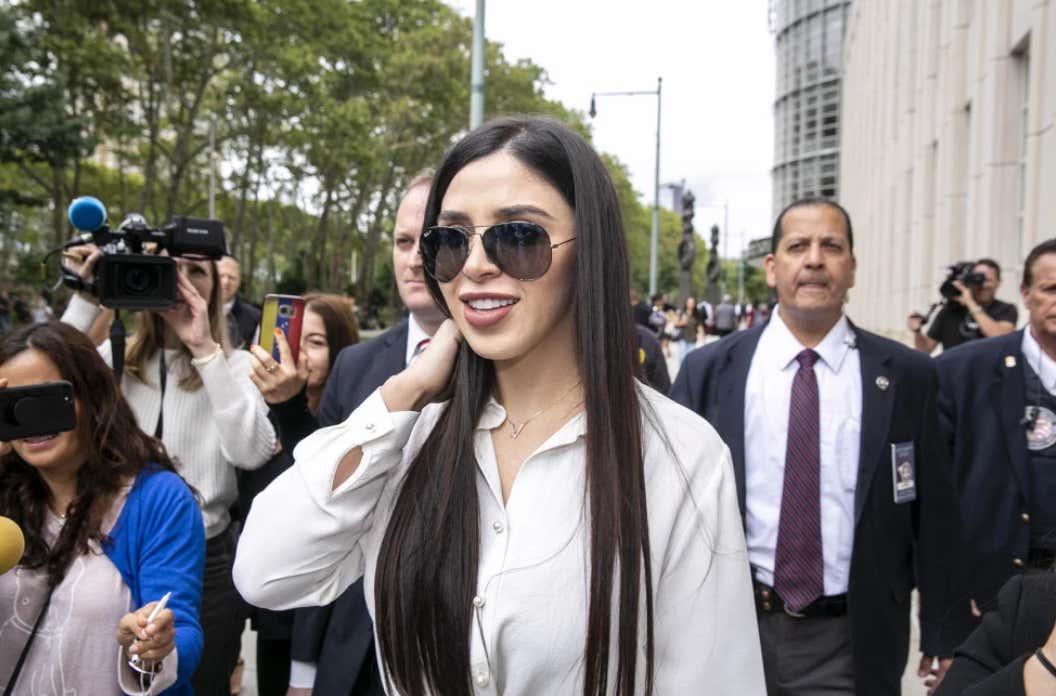 Daily Mail- The wife of the Sinaloa drug cartel leader Joaquin ‘El Chapo’ Guzman says she never saw her husband doing anything illegal while they were together. She also says she dreams of a peaceful life with her family including her husband and their twin daughters somewhere far away. Emma Coronel, the Los Angeles-born Mexican beauty queen, has been seen in Brooklyn federal court in recent weeks while her husband stands trial on multiple charges including murder conspiracy, drug trafficking, and money laundering. When Coronel, 29, was asked by Spanish-language network, Telemundo, on Monday if she had any clue about her husband’s criminal activities, she said she didn’t. ‘Of course not. The media outlets gave Joaquin too much fame,’ Coronel said of her husband. ‘They made him too famous.’ She also added that it was the media who built up El Chapo’s image as a notorious drug kingpin.

So hot. That’s the hottest thing ever. El Chapo’s smoke 29-year-old wife being like, “My husband did what? He’s a criminal you say? Balderdash! You must have the wrong guy” is as sexy as it gets. Meanwhile her husband is by far biggest criminal in the history of criminals. He’s killed more than 10 million people and sold no less 500 billion dollars worth of coke. He’s the Wayne Gretzky of criminals. Nobody even comes close. Pablo Escobar? Please. Pablo Escobar looks like a kindergarten teacher compared to El Chapo.

El Chapo is such a terrifying and successful criminal that people who get selected for jury on his trials start to bawl. They don’t just cry, they bawl. We’re talking snot and tears bawling because they know just how dangerous it is to be a part of the group that decides the criminal fate of Joaquin Guzman. Not only will he have jury members murdered dead but the guy has escaped from prison more times than I can count. Sentence him to prison as a jury member and he might come knocking on your door a few months later. The true marker of an all-time criminal is their ability to push things to places where other criminals couldn’t dream of. Other criminals go to prison and that’s the end of the line. El Chapo goes to prison and it’s a minor inconvenience in his criminal empire.

And yet, his wife will sit there and do an interview and deny that she knew he was a criminal and deny that she ever saw him do anything illegal. Mrs. El Chapo is who Ja Rule had in mind when he made the song Down Ass Bitch. Every thug needs a lady like Mrs. El Chapo. She’s the dictionary definition of a down ass bitch. Everybody wants to be like, “Shame on her. She should tell the truth” but the fact of the matter is that her ride-or-die attitude is super sexy.