UNDERDOG OF THE WEEK The upset: Decision over #9 Ryan Christensen 10-9

The Buckeyes’ unranked redshirt freshman, Ethan Smith looked like a seasoned arsonist when he walked right into his home debut on Sunday and set the place on fire with a scorching hot top-10 upset. Smith, who lost his wrestle-off in November but since found his way into the starting lineup, brushed off a 1–2 performance in Vegas last weekend and welcomed himself into the national rankings with a 10-9 win over #9 Ryan Christensen. Unlike the name “Ethan Smith,” the match was far from boring; I mean, I didn’t get to watch it physically, but I read a few write-ups on it, and I could feel the electricity just from the words used to describe his win.

Side note: I saw that he was from Latrobe, PA and thought to myself “that makes sense,” because the WPIAL breeds hammers like a DeWalt factory, but according to his roster bio, he went to high school in Maryland (Going from Western PA to Maryland for high school wrestling is like going from Miami to North Dakota for cocaine).

As a former college wrestler, I can confidently say that there’s no feeling in the world like going into an atmosphere like St. John Arena and getting a huge upset in front of a raucous crowd (I’ve never done it personally, but I’ve witnessed teammates do it). My experiences in dual matches at St. John Arena were actually limited to two thrilling tech fall losses to 4x NCAA Champ and World Champ, Logan Stieber. The following three pictures accurately summarize how both of those matches went in chronological order. 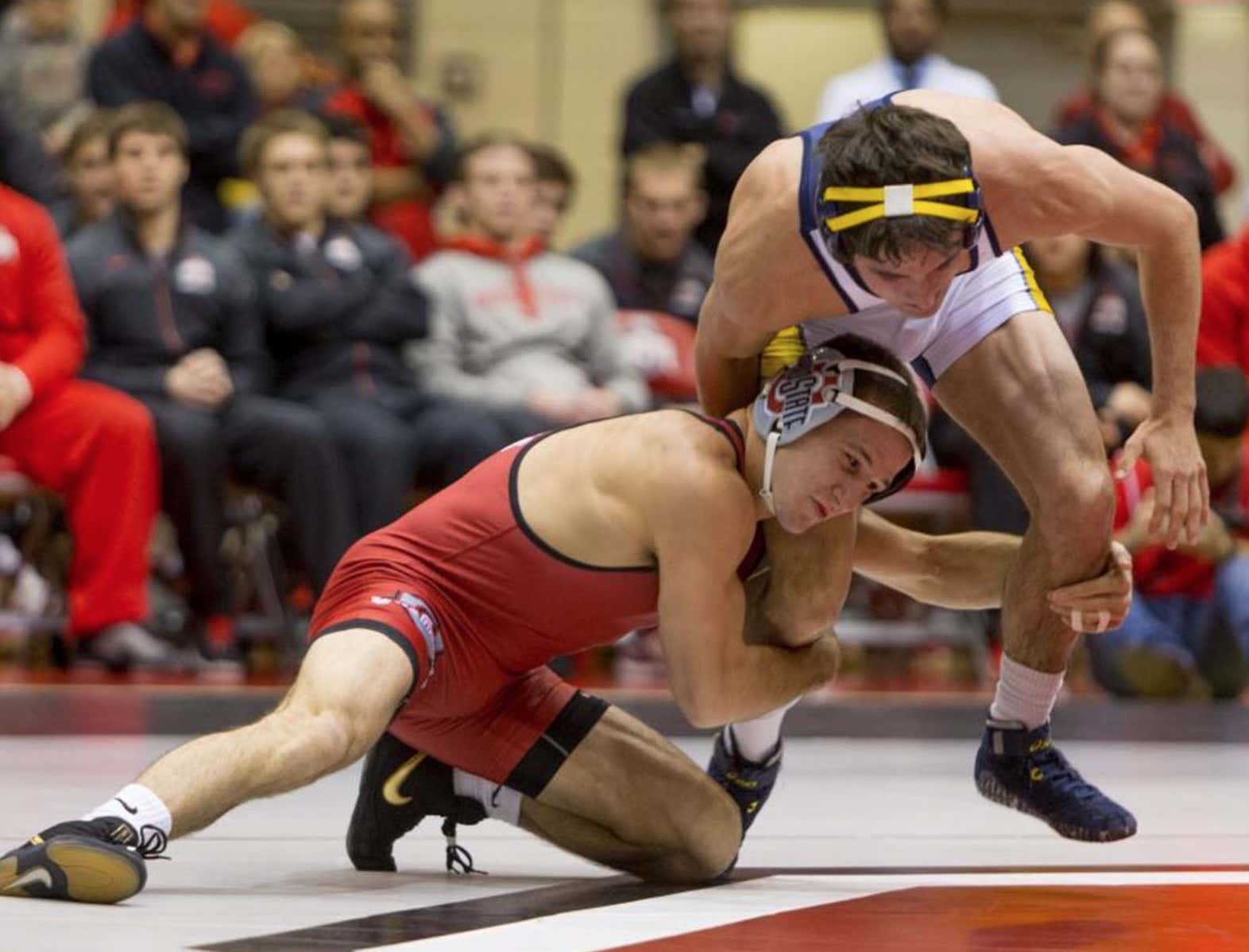 Fuck off. I didn’t get pinned.

WRESTLER OF THE WEEK The performance: Decision over #5 Larry Early 5-1

#2 Ryan Deakin was fresh off a dominant Vegas title (I crunched some numbers and his closest match of the tournament was a commanding 8-2 decision in the finals), and #5 Larry Early was coming off an even more impressive upset win over NCAA Runner Up, Hayden Hidlay of NC State (I crunched some numbers and that was only Hidlay’s second loss of his career). I didn’t see the match but a 5-1 win is leaving no doubt in the wrestling world. Deakin failed to All American (that’s a top 8 place finish at the NCAA Championships) last year at 149, but now he’s up a weight class and looking like a finalist contender. The only question now is can he take out #1 Jason Nolf of Penn State? The short answer is “no” and the long answer is “well, no” but anything can happen in March and I’ll be looking for him, along with Early, Hidlay, and Alec Pantaleo of Michigan to give Nolf all he can handle.

UNDERDOG TEAM OF THE WEEK

Repping the MAC and the 757 with the pride of a Monarch (I think that makes sense), unranked Old Dominion went into Evanston and made a statement with a gigantic 20 point win over the #11 team in the country.

The “Penn State Award” for Most Dominant Team of the Week 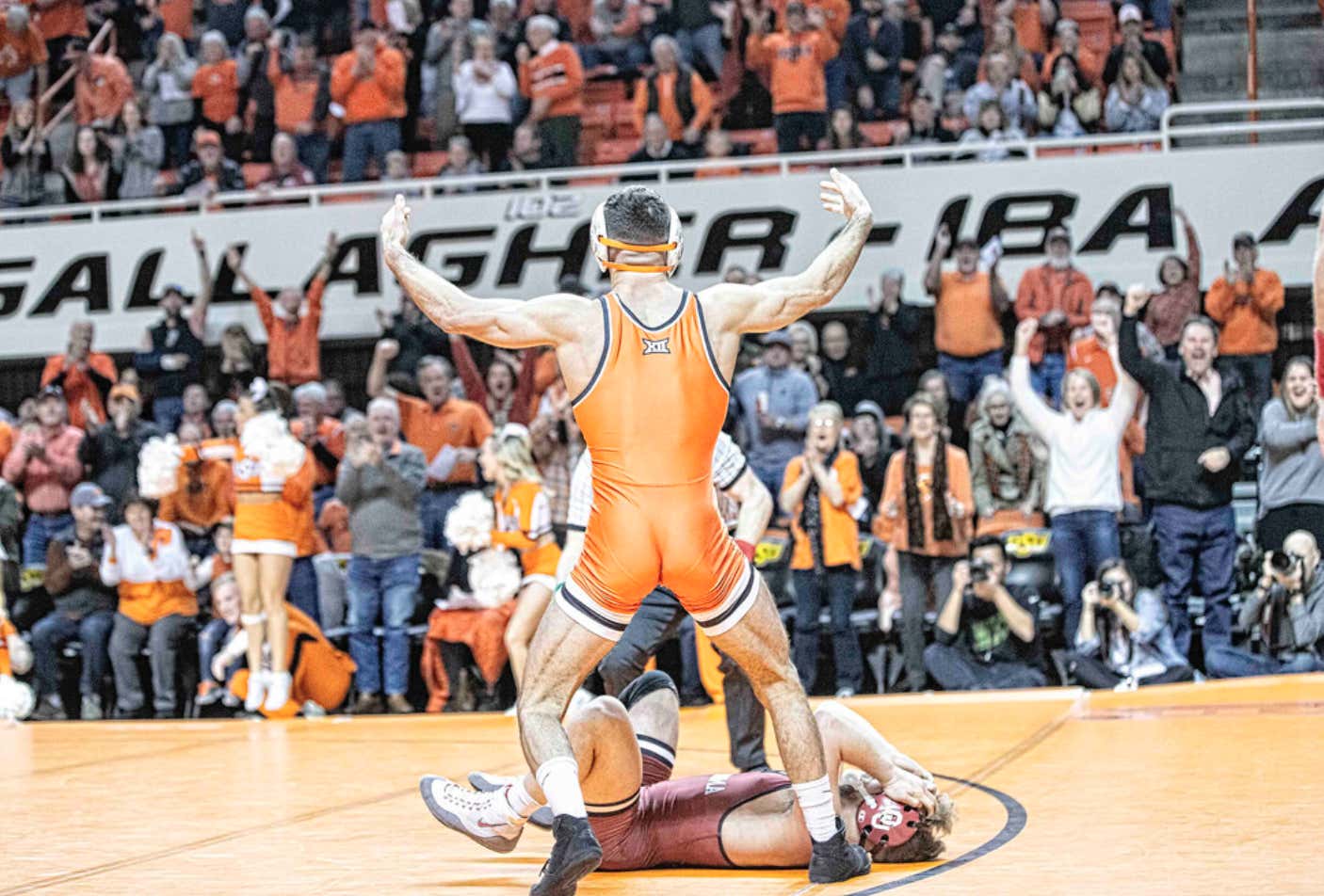 Rivalry? More like Why-valry, because why is this still even considered a rivalry? [cry laughing emoji] John Smith’s 6th ranked Cowboys tucked the Sooners into bed(lam) and put them to sleep with a 41-2 throttling on Sunday. But if we’re being honest, shoutout to both of these teams and all the fans, because I know big wrestling matches like this one are among the ONLY positive things about living in fucking Oklahoma. Perhaps the biggest moment of the dual was when Oklahoma’s 13th ranked redshirt freshman, Dom Demas pulled off a 7-6 (mild but spicy) upset over #6 Kaid Brock (2x All American) at 141 pounds.

I’m not even intentionally trying to show all this love to Jersey guys, but I have a glorious feeling about this young man, Pat Glory (#13 at 125). Yes, he got tech falled by #1 Spencer Lee in his first dual match as a true freshman….

But, he’s had nothing but tech falls of his own since that loss. He also sneakily had a major decision win over #16 Devin Schroder of Purdue at the Princeton Open in early November. This take might be SIZZLING, but I wouldn’t be surprised if he ended up in the finals against Lee in March. If I do regret my words, it’ll be sooner than later because on December 29-30, Glory will be competing at the Midlands Championships in a weight class that will feature the following guys:

On Saturday, December 1st, I woke up drenched in sweat because I had a vivid dream that I watched Illinois’ 6th ranked 141 pounder, Michael Carr pull off two crazy upsets to win a title in Vegas. The dream felt so real that I was almost certain that it was going to actually happen. Not just because he’s my good friend’s little brother, but because he’s really fucking good and has one of the best gas tanks in college wrestling.

Anyway, less than an hour later, he hurt his knee in a semi finals loss to #3 Jaydin Eierman of Missouri and ended up defaulting out of the tournament. Now, he’s out with an injury and I can’t help but think I might have cursed him. Do I have that much power? I’d like to think so.

If you’re a wrestling fan who wasn’t comatose last March, then you know the name Kyle Conel and you’re probably also a fan of Kyle Conel to some degree. His cinderella story at the NCAA Championships, combined with his story as a wrestler and person in general, was easily one of the highlights of the entire season. Especially for me, as a former teammate of his. Unfortunately, on Sunday, Kyle announced that his season, and likely career, has come to an end.

SHORT version of his story: Last season, he battled back to a spot on Kent State’s roster after quitting the sport for an entire year. He then went onto qualify for the NCAA Championships with a 30-11 record and a handful of losses to unranked guys. As an unseeded wrestler at the national tournament, he was forced to win a pigtail match before TEARING through the 197 pound bracket with three straight upsets over seeded guys, which was highlighted by a shocking first period pin over #1 ranked Kollin Moore of Ohio State that sent Quicken Loans Arena into a fit of chaos.

Here’s the long version of his story, which I’d highly recommend watching.

Throwback Story of the Week

“I have seen the toughest wrestlers in the world break mentally from cutting too much weight.” – Randy Lewis

Randy Lewis, who is a 2x NCAA champ for Iowa and 1984 Olympic gold medalist, wrote a blog post a while back about some of his craziest weight cutting stories. I previously thought I’ve experienced/seen/heard it all when it comes to cutting weight for wrestling but some of his tales are next level. It’s fairly short and extremely interesting even if you’ve never wrestled a day in your life, so I’d recommend reading the whole thing here.