I was never a big Dr. Seuss fan growing up, and honestly, I didn’t really watch How The Grinch Stole Christmas a lot as a child. It wasn’t one of my favorite holiday flicks, or storylines, but even so I knew what everyone knows: the Grinch is a bad guy. He’s a creature so miserable, he wants to make others miserable too.

And there’s no better way to destroy happiness than to destroy the holiday that brings joy to so many: Christmas.

It’s no wonder he inspired the lyrics of a generation:

You’re a foul one, Mr. Grinch
You’re a nasty-wasty skunk
Your heart is full of unwashed socks, your soul is full of gunk, Mr. Grinch
The three words that best describe you are as follows, and I quote
“Stink, stank, stunk!”

The Grinch is the VICTIM.

The people of Whoville are the bad people.  They are the terrors. THEY are the reason the Grinch moved out of town and isolated himself on top of a mountain, with only his sweet pup to keep him company. 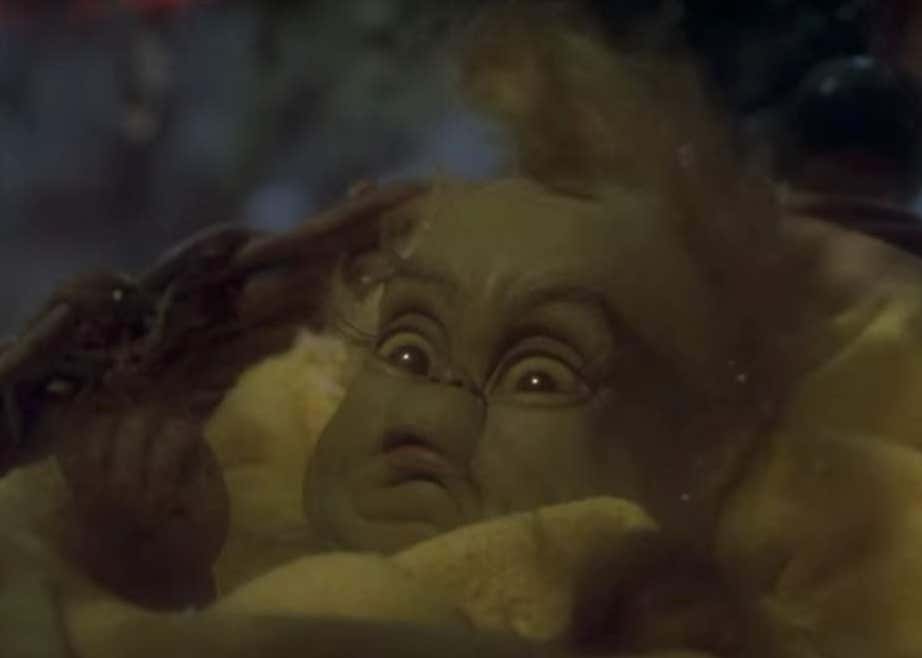 When he was a baby Grinch, he was left in a basket hanging from a tree, peering into a holiday party filled with adults who were dropping their keys in a bowl, presumably to choose who they were going to fuck at their annual Christmas orgy. Imagine the poor, sweet little Grinch, dangling from a tree branch in the snow, being forced to watch whatever disgusting, deviant behavior the Whos were participating in. I’m sure for the rest of his life he would have flashbacks to his first Christmas: the day he watched swingers as he was swinging from a tree, alone and unloved.

But because children are resilient, he moved past an incident that would traumatize even the most well-adjusted child, and fell in love with Martha. Despite his classmates’ insults, he decided to pursue her. He spent all night making the perfect gift for Martha, something that would impress her and get her to see past his green exterior and hair aplenty.

In fact, yes, he was going to shave his face. Just for Martha. It didn’t matter that he was only 8-years-old: he was willing to do anything for love.

So the next day, post-shave, he put on his sailor-best and made his way to school. Unfortunately things didn’t go as he planned. He didn’t get the girl. Instead he wore his heart on his sleeve and cut his face up only to be ridiculed by a fat, wolverine-haired bully while the rest of the class joined in. 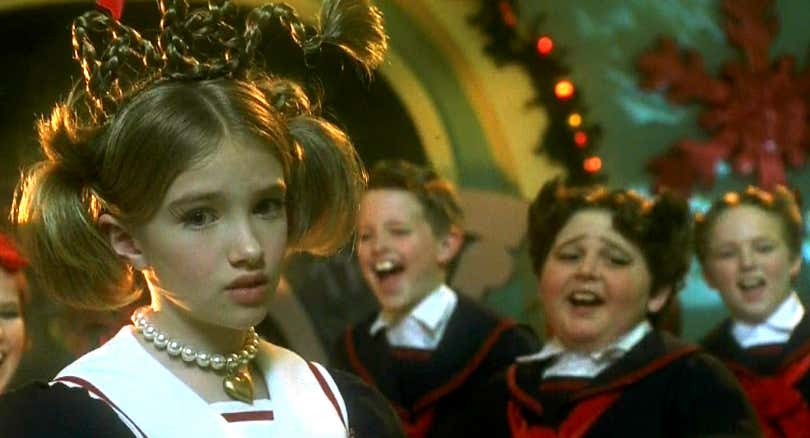 It was all too much for him. The Whos won. Little Grinch climbed to the top of a mountain sobbing, “I hate Christmas, I hate it!” And who could blame him? Of course he hates Christmas! It’s a holiday that has only brought him complete and total agony. Who wouldn’t be filled with hate after suffering at the hands of assholes his entire life? He preferred to isolate himself on a fucking mountain instead of dealing with people who are so concerned with their physical appearance and keeping up with Whos their #1 goal is out-decorate their neighbors’ homes.

Then sweet Cindy Loo arrived to inform him the people of Whoville wanted to give him an award and he lit up like a Christmas tree. He couldn’t believe THEY wanted to give HIM an award. And still, all these years later, he was looking forward to seeing Martha; he wanted his Martha to see him as a winner. (For a guy they claimed had a “heart too small,” he sure does have a soft spot for love.) So, like most of us, he struggled to pick out an outfit. After all, what does one wear to the first and only event they are invited to? An event that will hopefully be the beginning of his acceptance into society.

Nervously, he makes his way down to Whoville. And what do the people of Whoville do when they see him? They hold him down and force a hideous sweater on him and shove endless sweets and goods down his gullet. That’s assault, brotha! The Whos didn’t ask him if that’s what he wanted to wear, they don’t give a shit if he doesn’t want to consume a life-time of sugar in one sitting, he has to do what they want him to do in order for them to accept him. So the Grinch does what they want, and you know what? He’s happy. For the first time in his life he feels like people want him around. Until…

My God. They brought him out of hiding to “gift” him a buzzer? The thing that sent him into insolation to begin with? And on top of that, the fat fucking Mayor proposes to the love of his life, right in front of his fucking face? That sort of cruelty is next level.

Frankly, the Whos are lucky the only thing he took from them were Christmas presents! A lesser man would have taken things much, much further. You get cast out of society by a non-stop rhyming group of assholes with overworked hair and you see how you turn out.