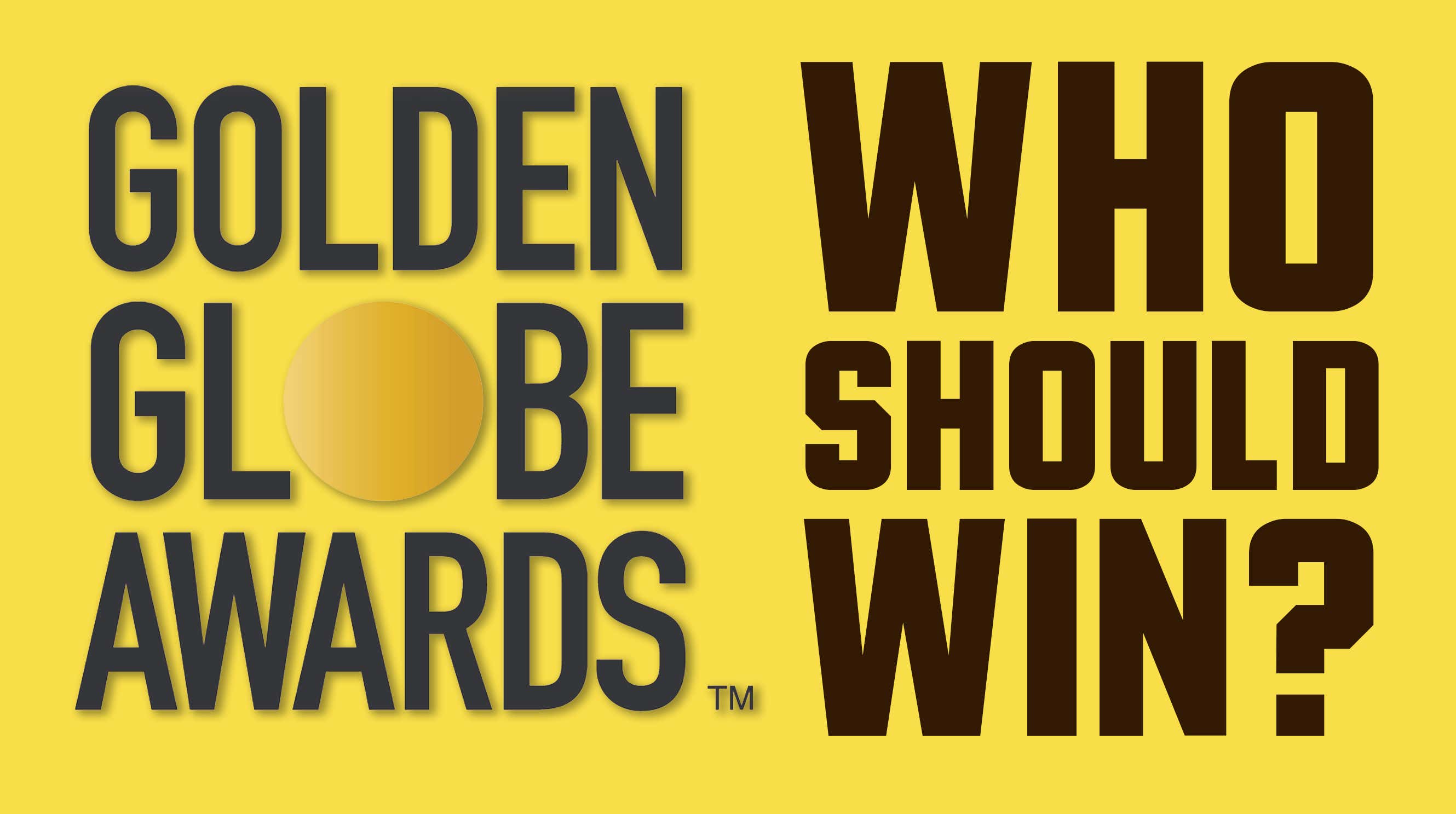 The nominations for the 2019 Golden Globes are out! I really love movie award shows… but don’t particularly care for the Golden Globes. They try to be “edgy” and different with their nominations and it is almost never an indicator for the actual results during the Oscars. Nevertheless, it is a big part of our brand to cover these things, so here is what and what we think the winner of each category should be. 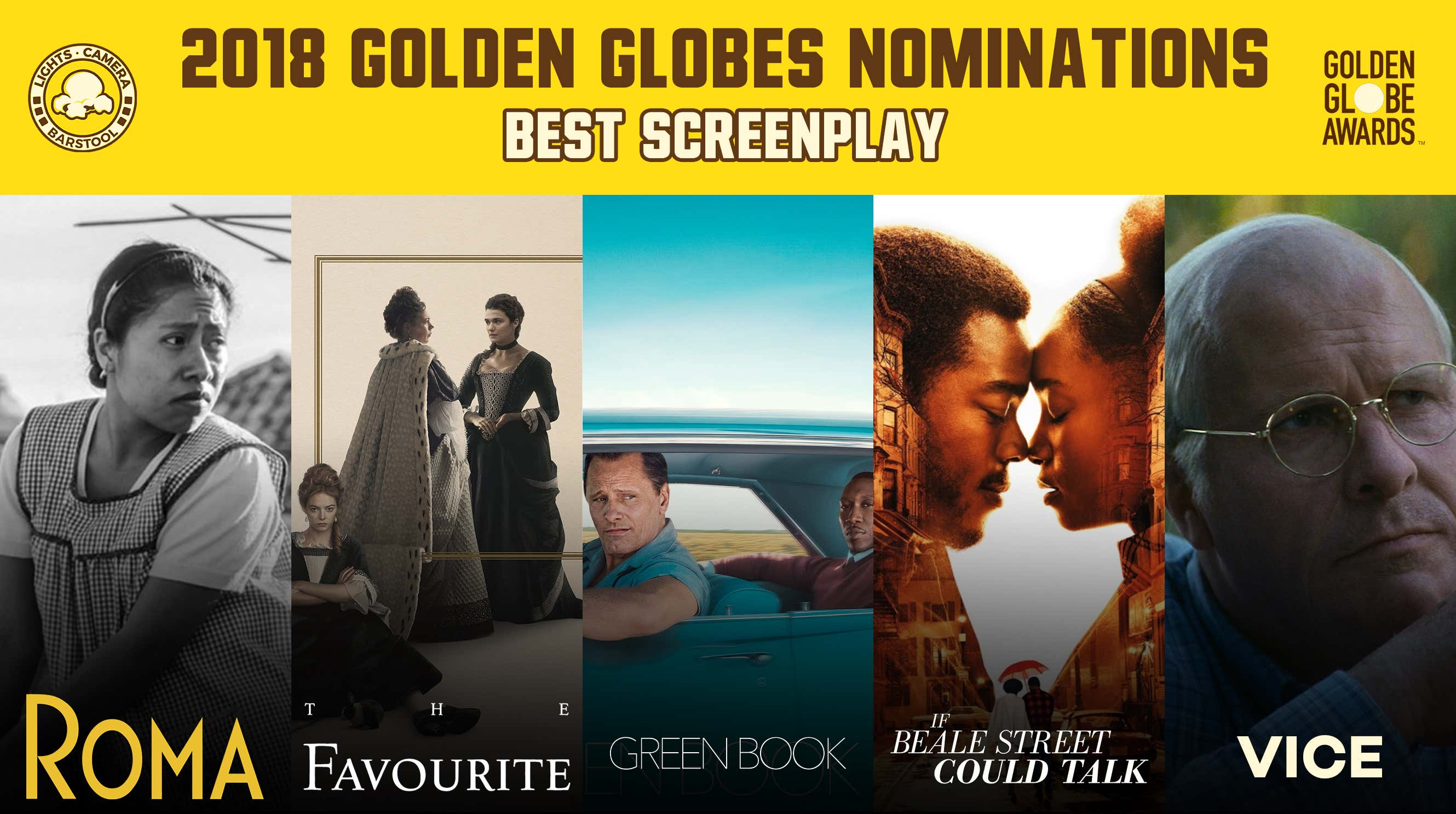 Jeff: ‘Vice’ – This feels cheap because we haven’t seen it yet (comes out on Christmas), but if ‘The Big Short’ is any indication, ‘Vice’ is going to be amazing.

KenJac: ‘Vice’ – I haven’t seen it yet, but I have infinite faith in Adam McKay. I fully expect it to be funny and effortlessly witty with fantastic dialogue. 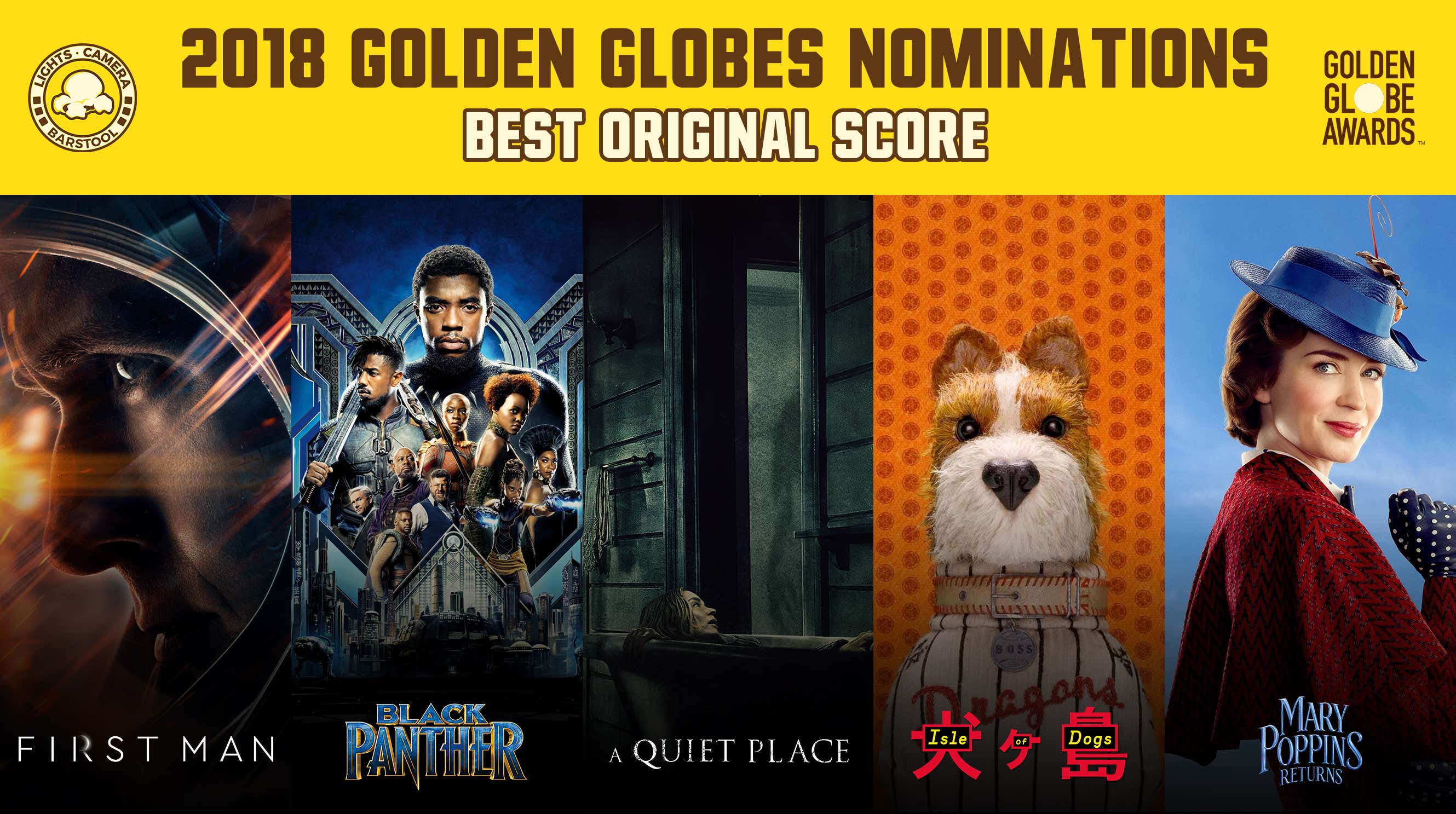 Jeff: ‘Isle of Dogs’ – I thought this movie was boring as hell and one of my least favorite Wes Anderson movies, but I loved the music and Alexandre Desplat is an absolute legend.

KenJac: ‘Vice’ – I loved what Ludwig Göransson (Creed I & II) was able to do with this score as far as incorporating African music with some more modern beats. If I saw ‘Mary Poppins Returns’ I might pick it, but I don’t have the same Adam McKay faith in Lin Manuel Miranda. 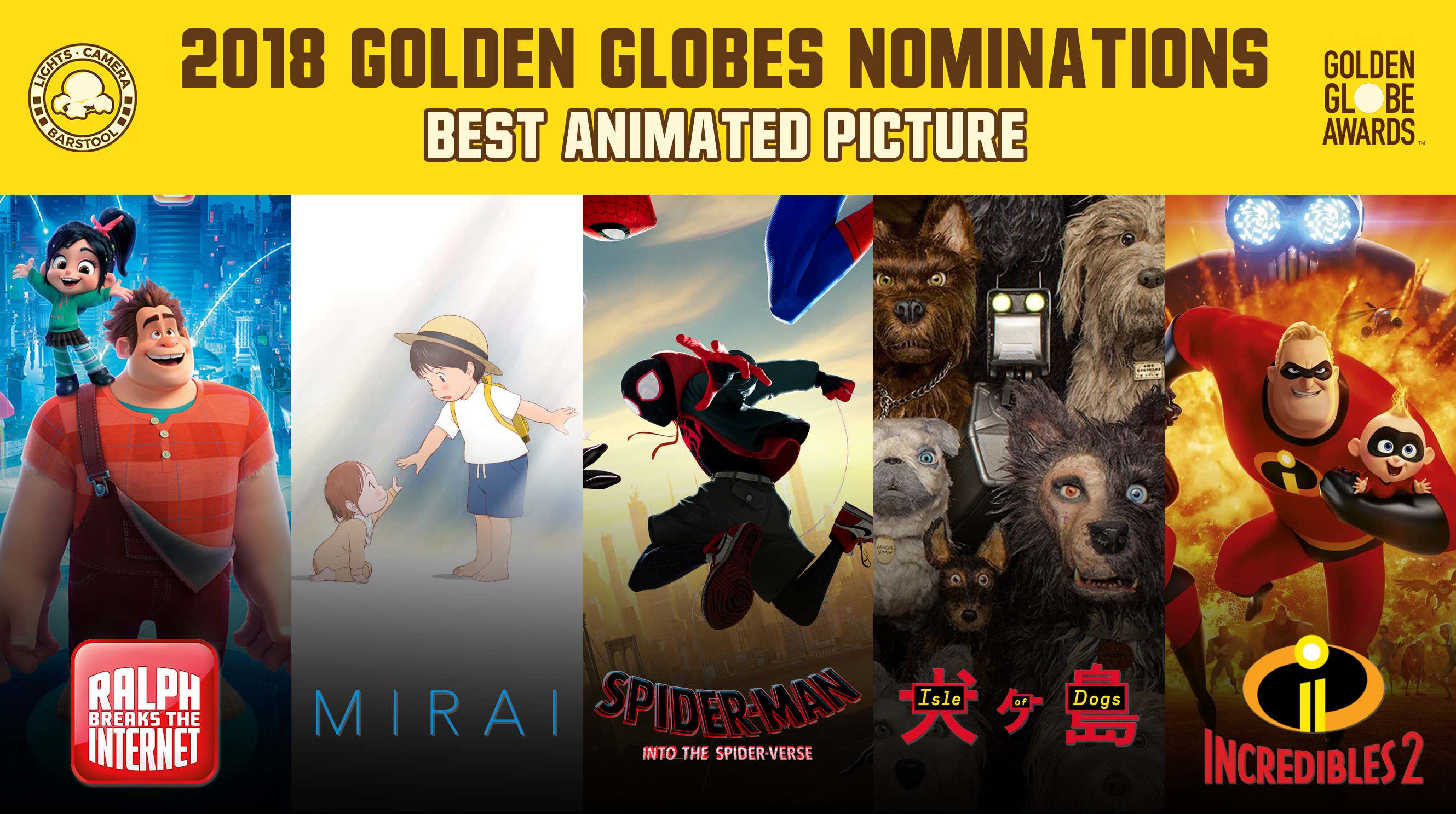 Jeff: ‘Spider-Man Into the Spider-Verse’ – Many people will pick ‘Isle of Dogs’, but ‘Spider-Verse’ is one of the most unique, fun comic book movies ever made and it will be a crime if it does not win.

KenJac: ‘Spider-Man Into the Spider-Verse’ – ‘Isle of Dogs’ is a close second, but god damn was Spiderman an Audio/Visual treat. It leant perfectly to the comic book feel without seeming gimmicky in the slightest (Sorry, Eric Bana Hulk). 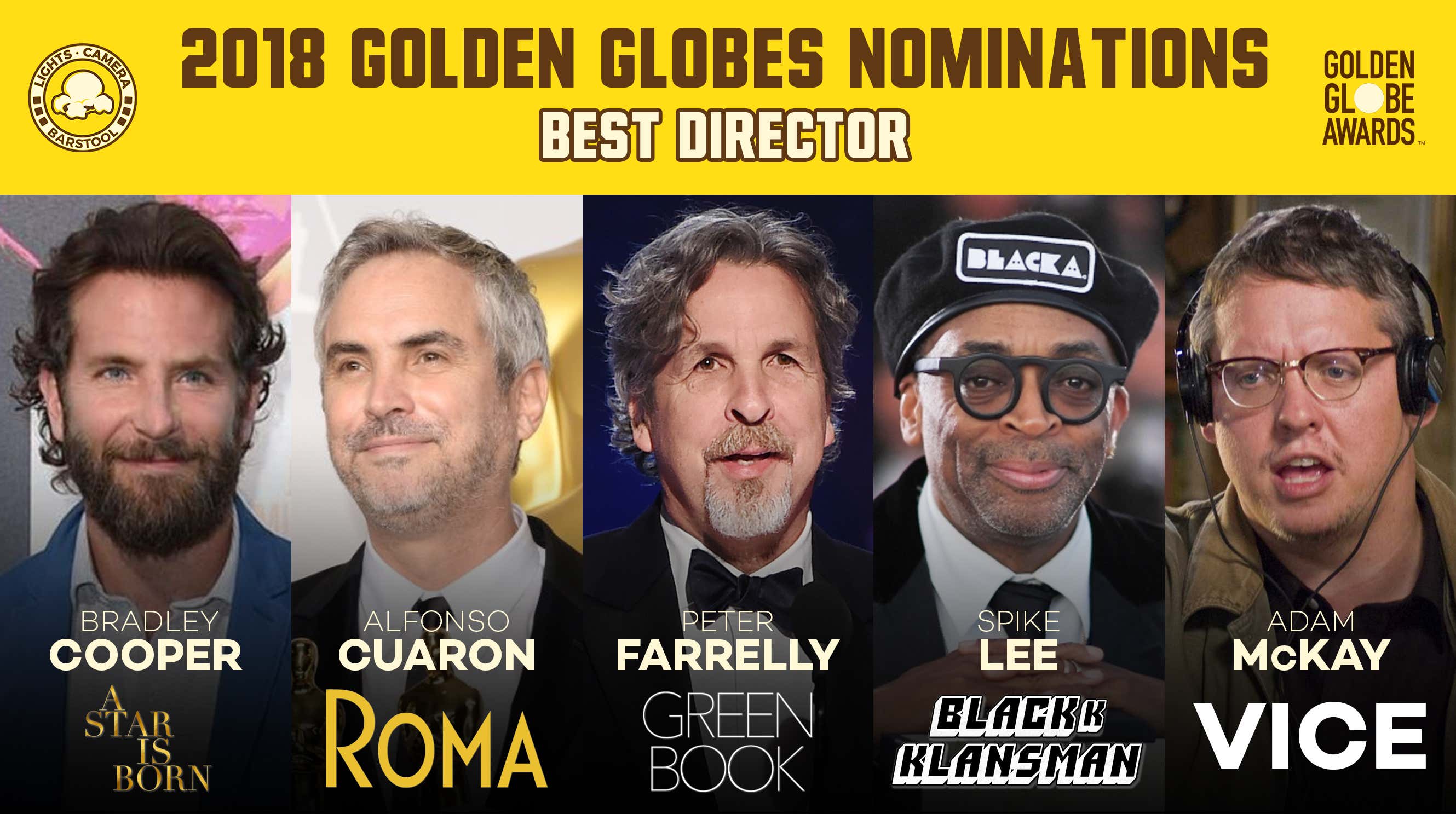 Jeff: Adam McKay – I am the leader of the Worldwide Adam McKay Fan Club. ‘Step Brothers’, ‘The Big Short’, ‘Anchorman’, ‘The Other Guys’ and the list goes on and on… 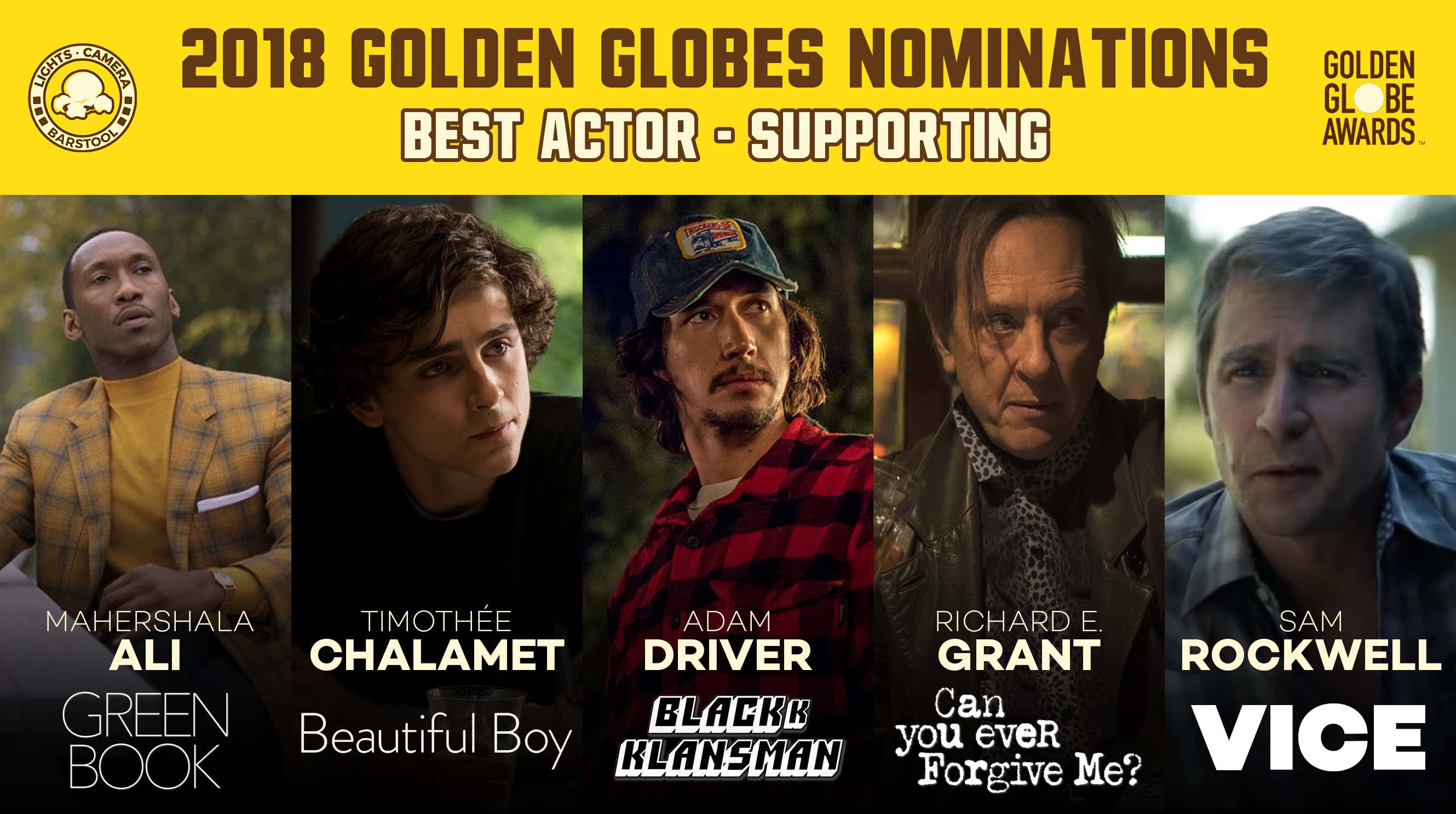 Jeff: Adam Driver – No nomination for Sam Elliott in ‘A Star Is Born’ makes me sad, because I would have picked him here as my choice. Since he is not nominated, my vote goes to Adam Driver, who was fantastic in ‘BlacKkKlansman’.

KenJac: Richard E. Grant – I can’t vote against a very close friend of the pod. 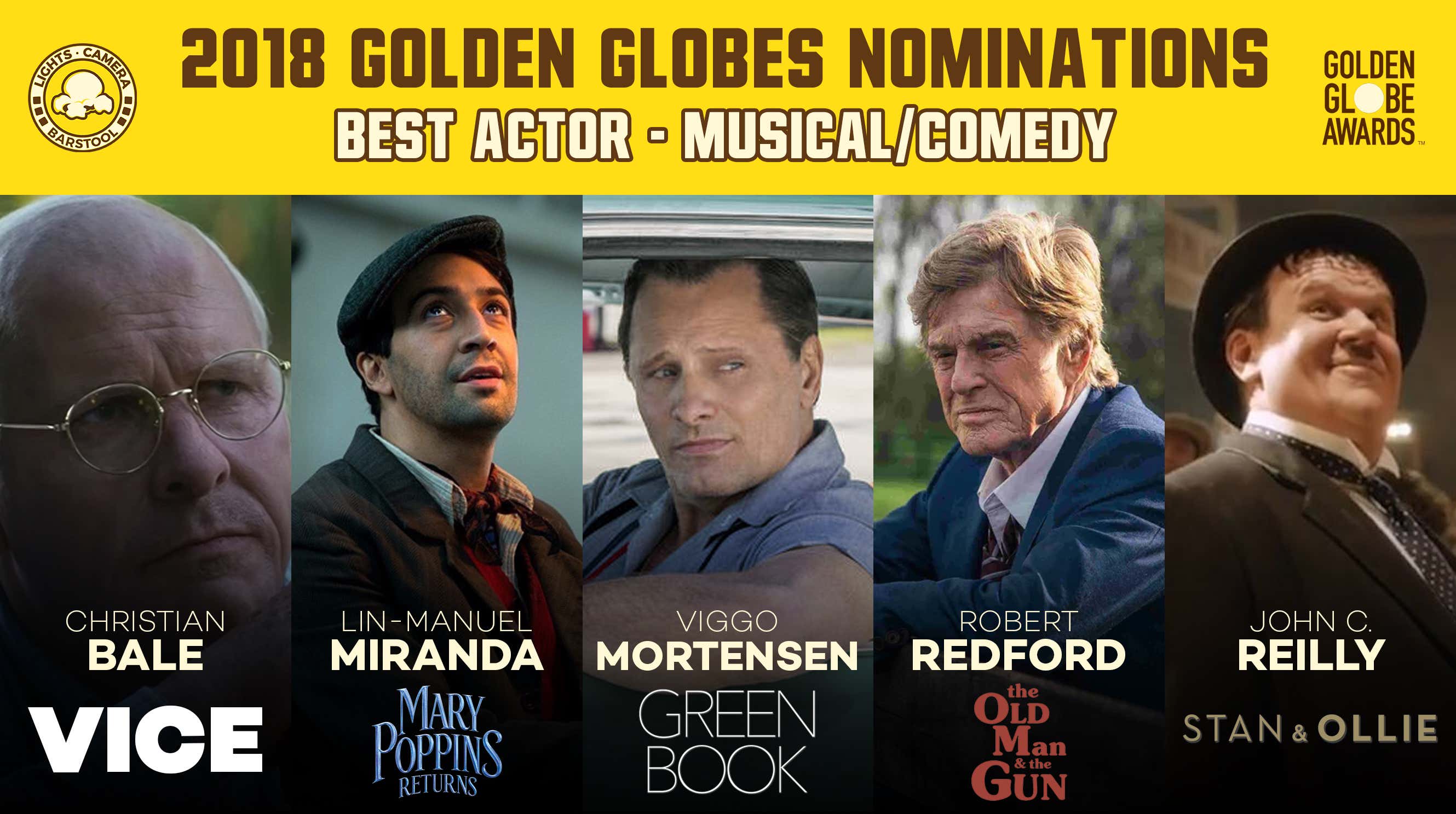 KenJac: Christian Bale – Again, I know the movie isn’t out yet, but there is a ton of hype around his performance. 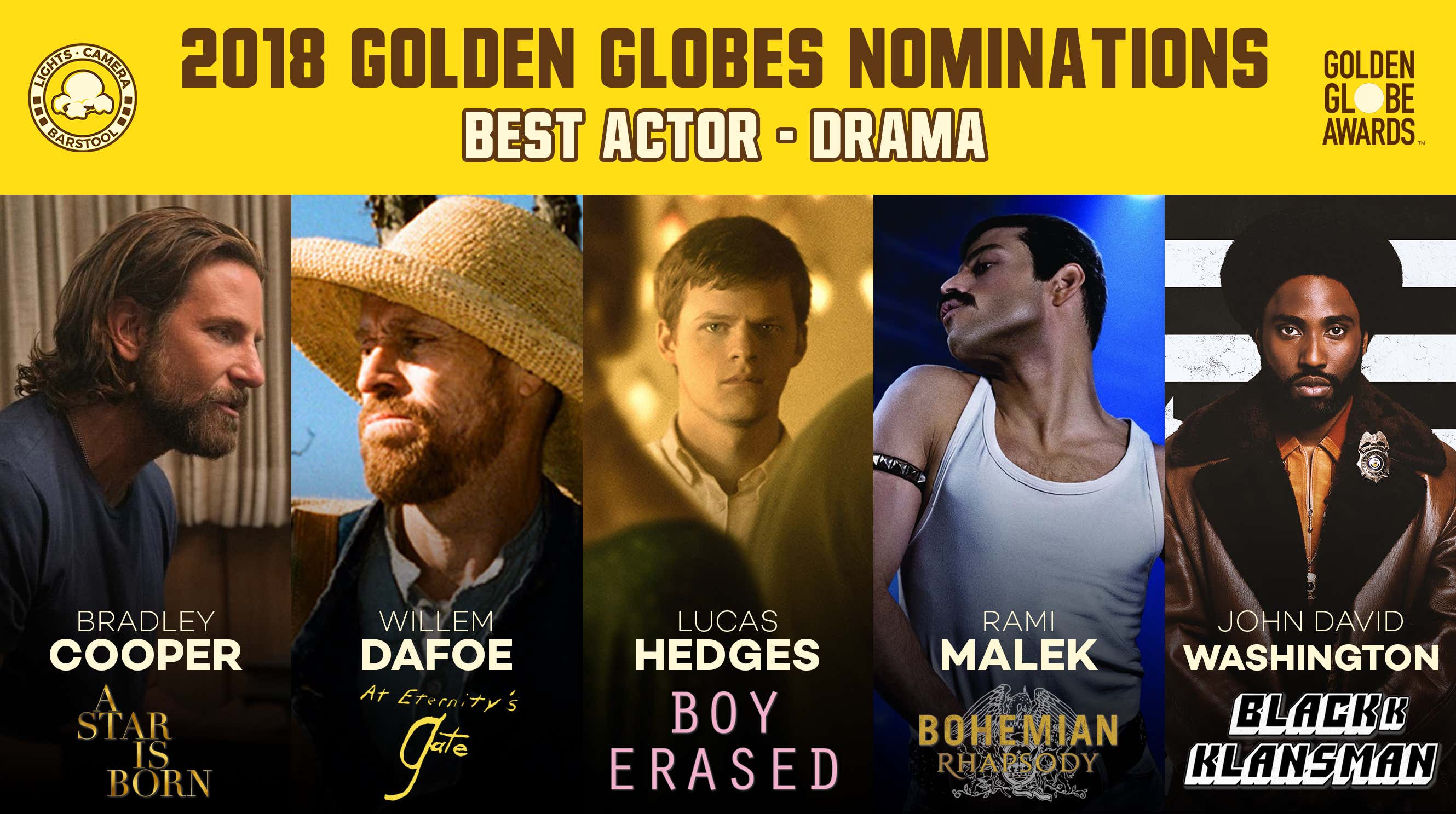 Jeff: Bradley Cooper – I thought this was one of Cooper’s best performances. He was great on the mic singing and dropped a pretty gut wrenchingly raw performance on the audience.

KenJac: Bradley Cooper - I don’t particularly love any of the nominees, but Cooper was the best of this bunch in my opinion. He portrayed the multi-faceted views of addiction perfectly. 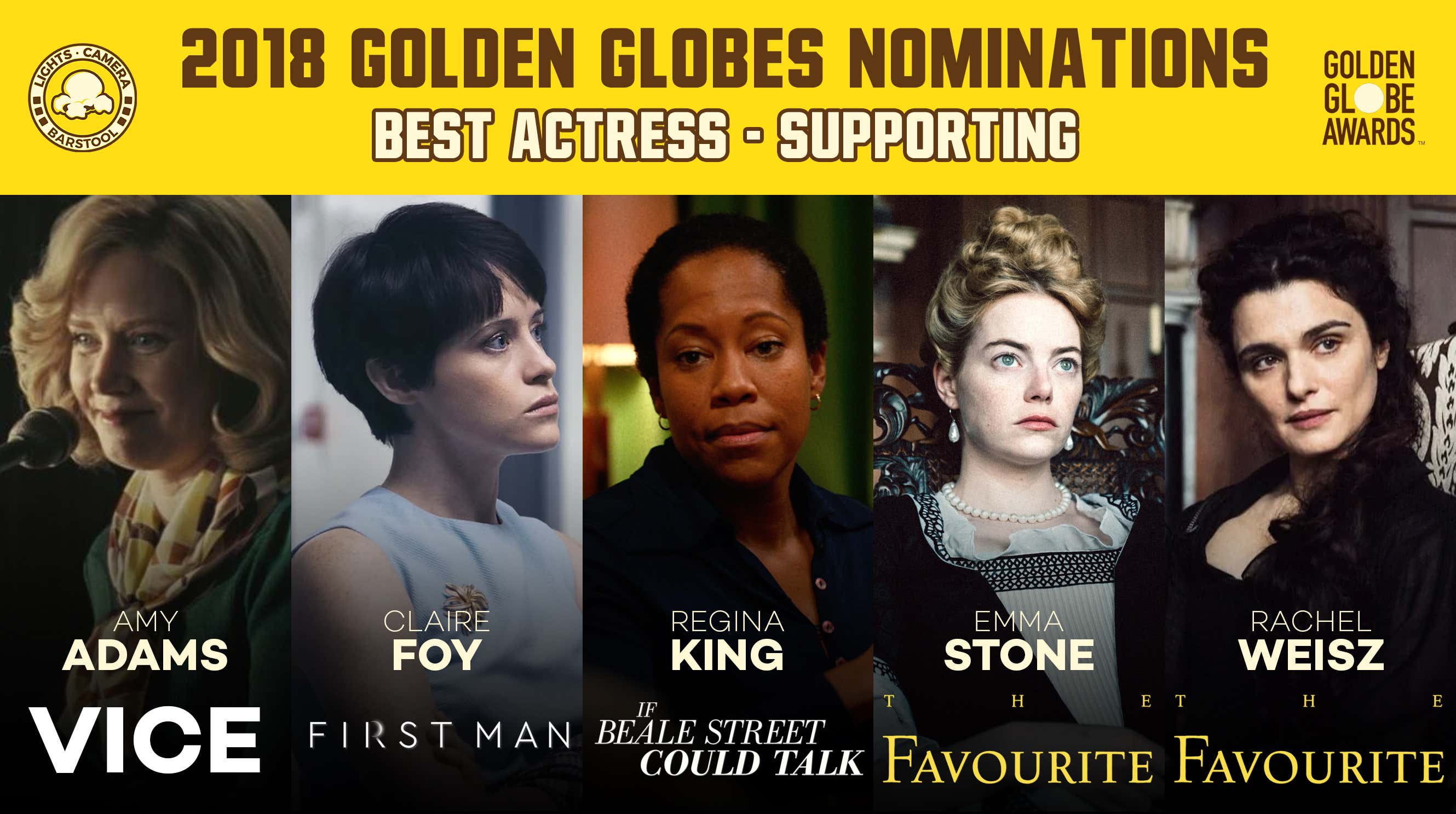 Jeff: Claire Foy – I thought she portrayed the horrors of having a loved on in space perfectly. She really brought a giant sense of humanity to ‘First Man’.

KenJac: Rachel Weisz – ‘The Favourite’ is one of my favorite movies of the year, no pun intended. A lot of that has to do with Weisz’s dynamic with Emma Stone’s character. 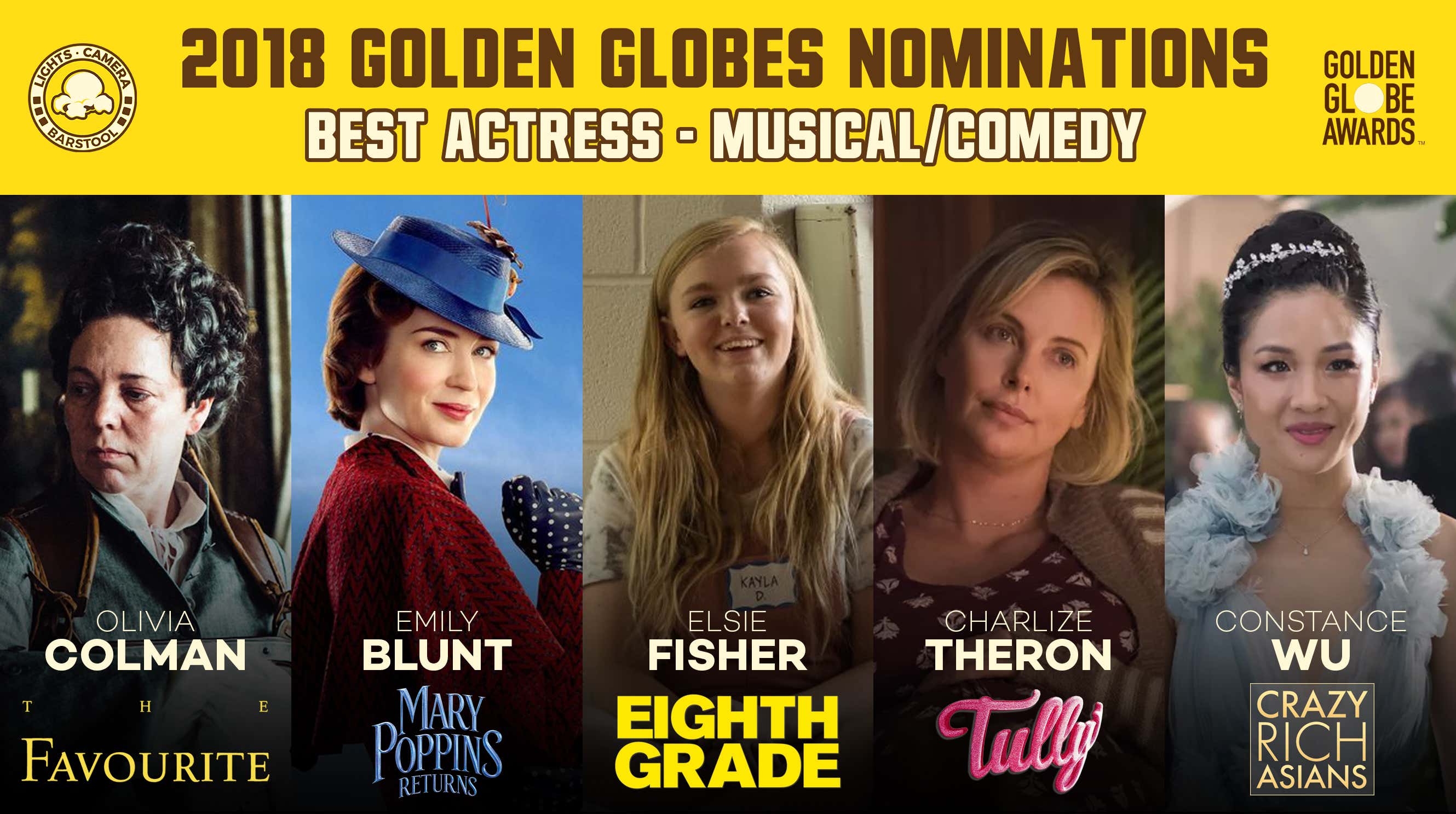 Jeff: Emily Blunt – I am only basing this off of reviews, but if they’re true, I am going to love Emily Blunt as Mary Poppins.

KenJac: Elsie Fisher – Elsie Fisher’s portrayal of Kayla easily created the most visceral reaction out of any movie I’ve seen this year. The fact that she was able to put together the performance she did as the 14-year-old makes her #1 on my stars-on-the-rise list. 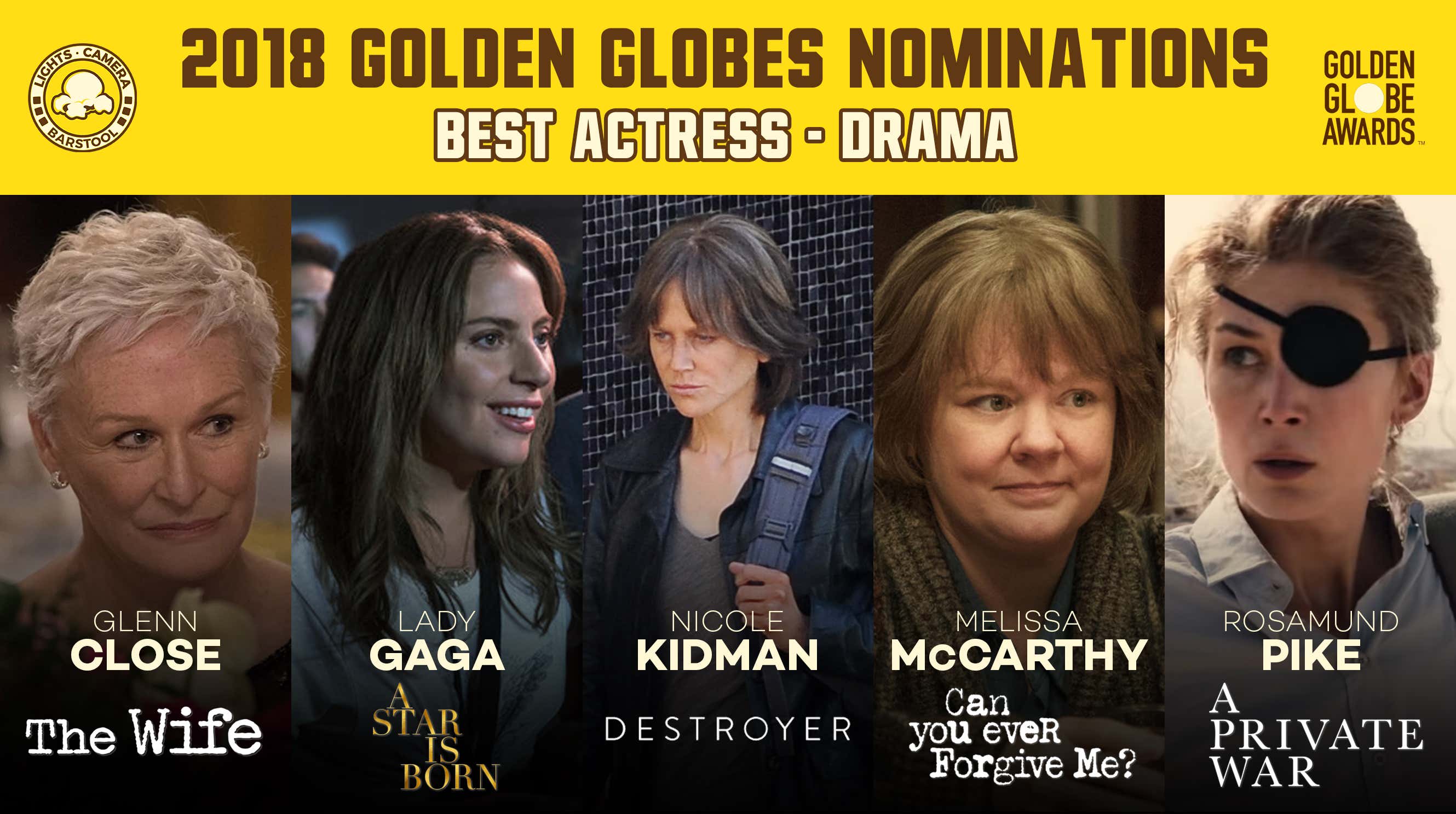 Jeff: Lady Gaga – It’s hard for me to not pick Melissa McCarthy, who was great in the movie ‘Can You Ever Forgive Me?’ but Lady Gaga’s memorably performance in ‘A Star Is Born’ is too hard to pass up.

KenJac: Melissa McCarthy – She was outstanding in ‘Can You Ever Forgive Me?’. Considering her last two roles in ‘The Happytime Murders’ and ‘Life of the Party’ were so awful, her performance was also an incredible rebound. I’m talking AP 2012 season type stuff. 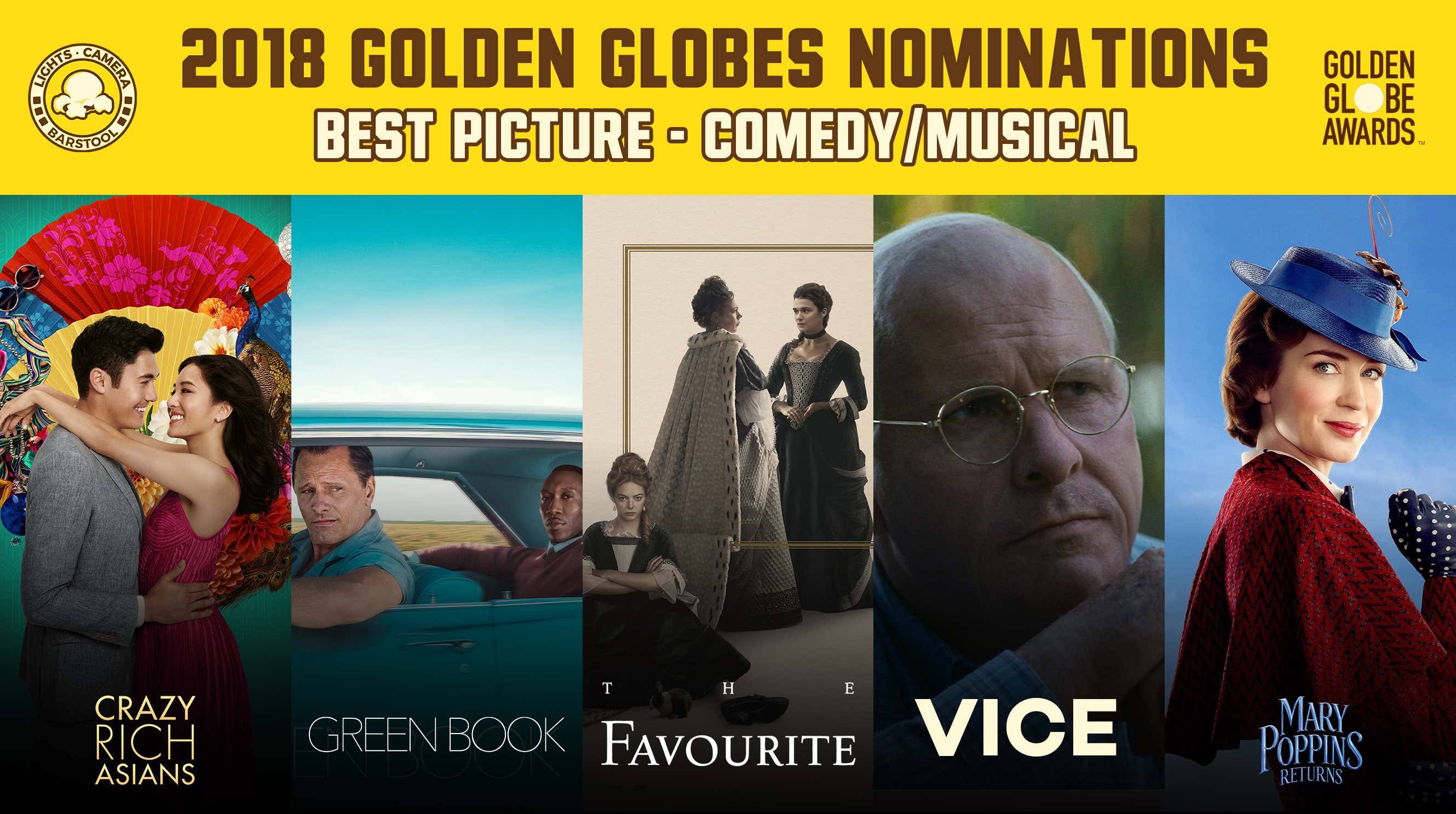 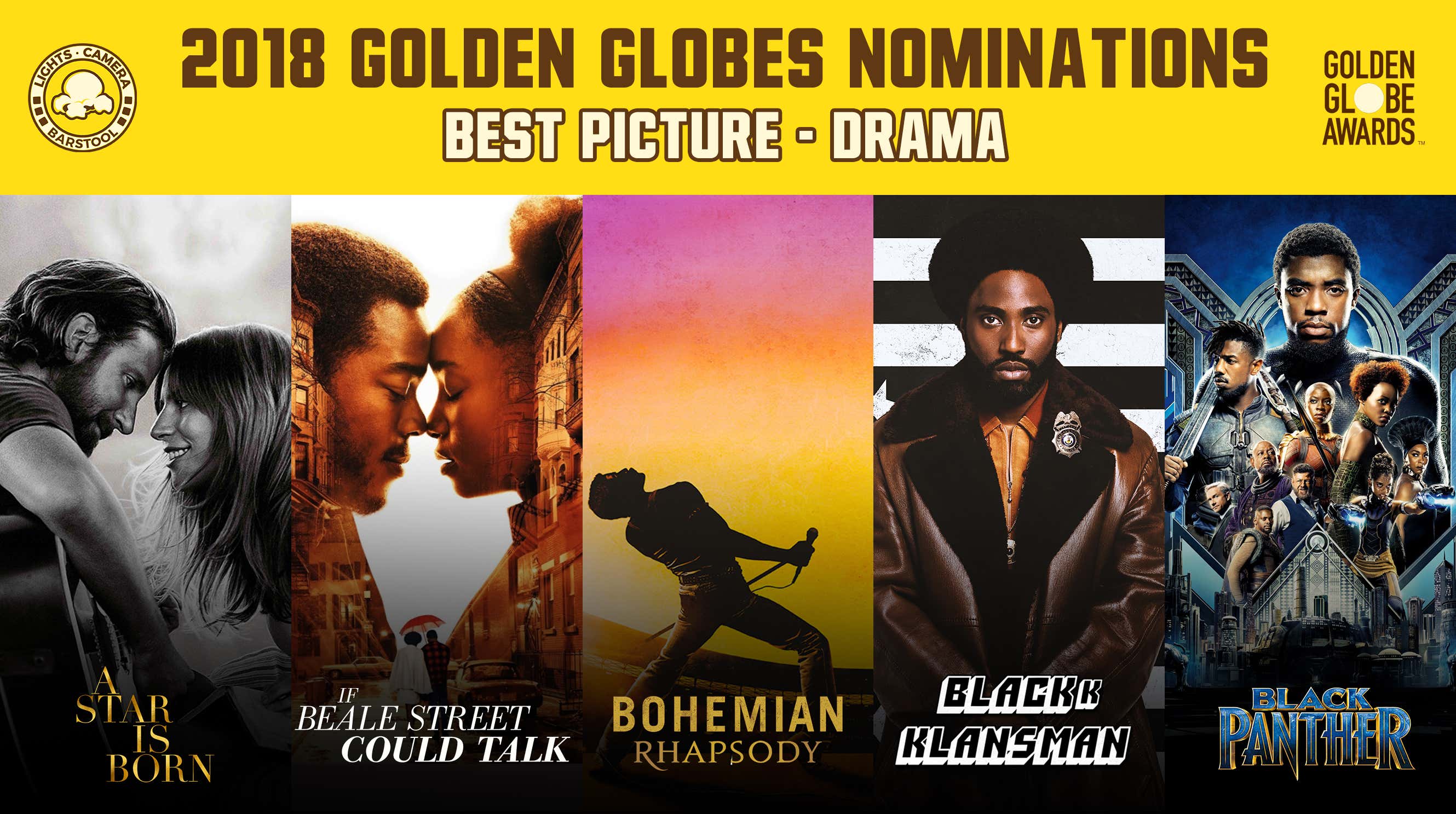 Jeff: ‘A Star Is Born’ – I can’t believe ‘Bohemian Rhapsody’ got a Best Picture nomination and got one in the Drama category to boot! ‘A Star is Born’ will finish in the Top 3 for movies I’ve seen this year and would be very deserving of this award.

KenJac: ‘A Star Is Born’ – The trailer alone for ‘If Beale Street Could Talk’ made me tear up, but it’s tough to bet against Cooper here.

—
The 76th Golden Globe Awards will air on January 6th at 8:00PM EST on NBC. We will do our predictions that week. Until then, subscribe to Lights, Camera, Barstool and go see some movies.