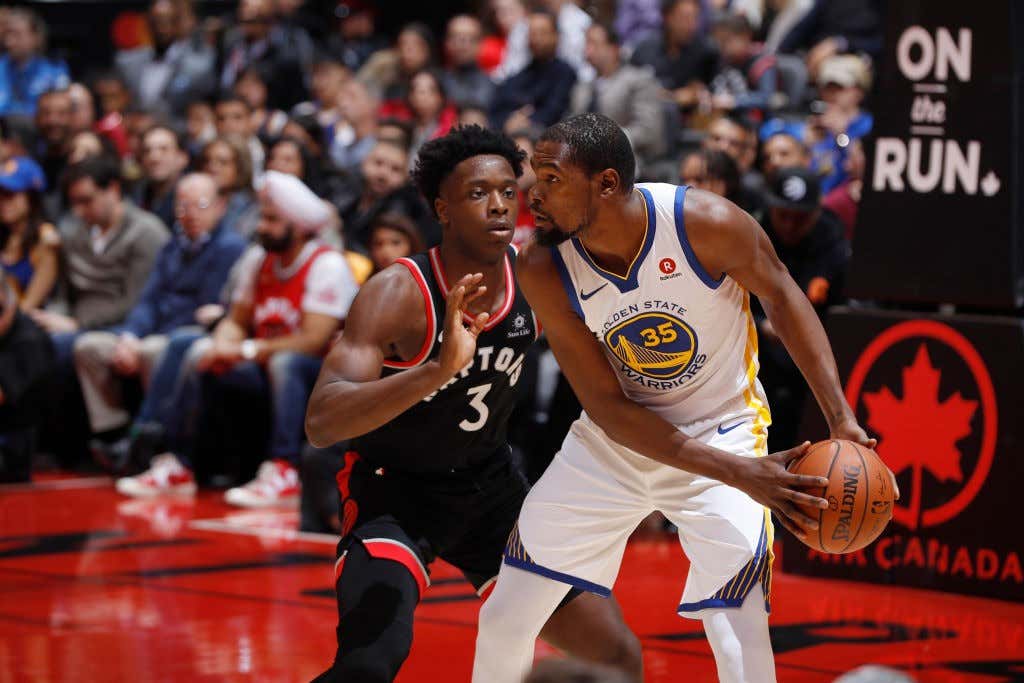 So unless you’ve been living under a rock, you know we have one of the most anticipated matchups of this entire young season tonight up in Toronto with the rested Golden State Warriors coming to town. Some are calling it a Finals preview, and if we were to just focus on what we’ve seen so far through this point of the season, I wouldn’t say that’s all that outrageous of a statement. Clearly the two best teams from each conference, the Raptors are winners of 6 straight and 9-2 at home, and obviously the Warriors are the Warriors. For them this is just any other game, but for TOR I would say it’s a pretty good measuring stick. That’s how it is for all of these East contenders, and we already saw MIL beat this GS team, so now it’s the Raptors turn to see how close they are. Remember, despite their drama and mini slide, the Warriors are still the title measuring stick that everyone is still trying to chase.

That’s why I find it pretty lame that GS is holding out Steph Curry tonight, choosing instead to bring him back against the Pistons on Saturday. I get it, they probably want an easier opponent to get him back into the flow of things but that doesn’t mean as an NBA fan I have to like it. We see all these reports about how he is itching to play, and how much healthier can he get from tonight to Saturday? It’s also a shame that Draymond isn’t ready yet either, as Kerr said he won’t be playing again until the end of the trip. His injury seems more serious so I give him a pass, but I feel like it’s different with Curry. I know the league can’t fine the Warriors for holding him out of a primetime game since he was really “hurt”, but it still sucks.

There are a ton of things to be excited for in regards to this game, here are some of my favorites

No brainer here. Any time you have two top 5 players going against each other, it’s must watch. Durant has been on a tear as of late avergaing 35.6 pointd a game over his last 5 while shooting 48% form the field. I’m interested to see how Kawhi defends him because as we all know he’s probably the best on ball defender in the league.

If we’re being honest though TOR will most likely switch things up, throwing guys like OG and Siakam on Durant as well, but it’s the Kawhi matchup I am most excited for.

Bet you didn’t realize it’s the Raptors that have the second best offense in the NBA at this point of the season. Hell I didn’t until I looked it up. Both of these teams play at a similar pace, and both make a similar amount of threes a night (11.8 for TOR vs 11.5 for GS). Now with no Curry that may change, so it’ll be interesting to see outside of Durant isolation how they are able to hang with this elite Raptors offense. Pressure is on guys like Klay to be a reliable option, which may be tough given the length and quality defenders the Raptors have

Raptors fans already know this, but to people who may not watch a lot of TOR basketball, you may not be familiar with what a breakout year Siakam is having. He’s doubled his scoring average from last season to 14 a game, and he’s shooting a stupid 63% from the floor in nearly 30 minutes a night. He has a KILLER spin move and is doing a great job finishing through contact, as he is among the league leaders in And1 fouls.

With Draymond out, I’m curious to see how Kerr defends him. Does he throw Iggy on him? Maybe some Jonas Jerebko or Jordan Bell? I don’t particularly love those matchups for GS. The Raptors are going to use Siakam in the P&R over and over to expose a mismatch and then let him get to the rim, and so far nobody has been able to stop it.

If the Warriors like to play small, how are they going to stop the Raptors from scoring in the paint

Everyone knows the reason the Warriors have been so deadly is because they can play small ball and then  just run you out of the building. But with guys out, that’s not really an option. Chances are they are going to be forced to play bigger, which sort of plays right into TOR’s hands. This is a team that is comfortable playing big, and is 6th in the NBA in points in the paint. The Warriors? They’re 29th. I’m not sure the Warriors can win that battle tonight which is going to be tough especially with no Curry in the lineup to help make up for that difference.

Come on, a huge game in TOR against the Warriors? You know TNT is going to keep flashing to Drake and you know he’s going to be talking shit. There could even be a potential Reggie Miller/Spike Lee situation with Durant and Drake, and we should all be rooting for that.

Either way, this is going to be a hell of a game tonight at 8pm. Vegas actually has the Raptors favored by 9 which seems a little high, but that just goes to show you how goddamn unstoppable they’ve been this season. If you look at almost any stat, points per game, opponents points per game, shooting, rebounding, passing, blocks, and steals, these two teams have been nearly identical. If the Raptors reaaaallly want to make a statement to the rest of the NBA, this is a game that can do it.