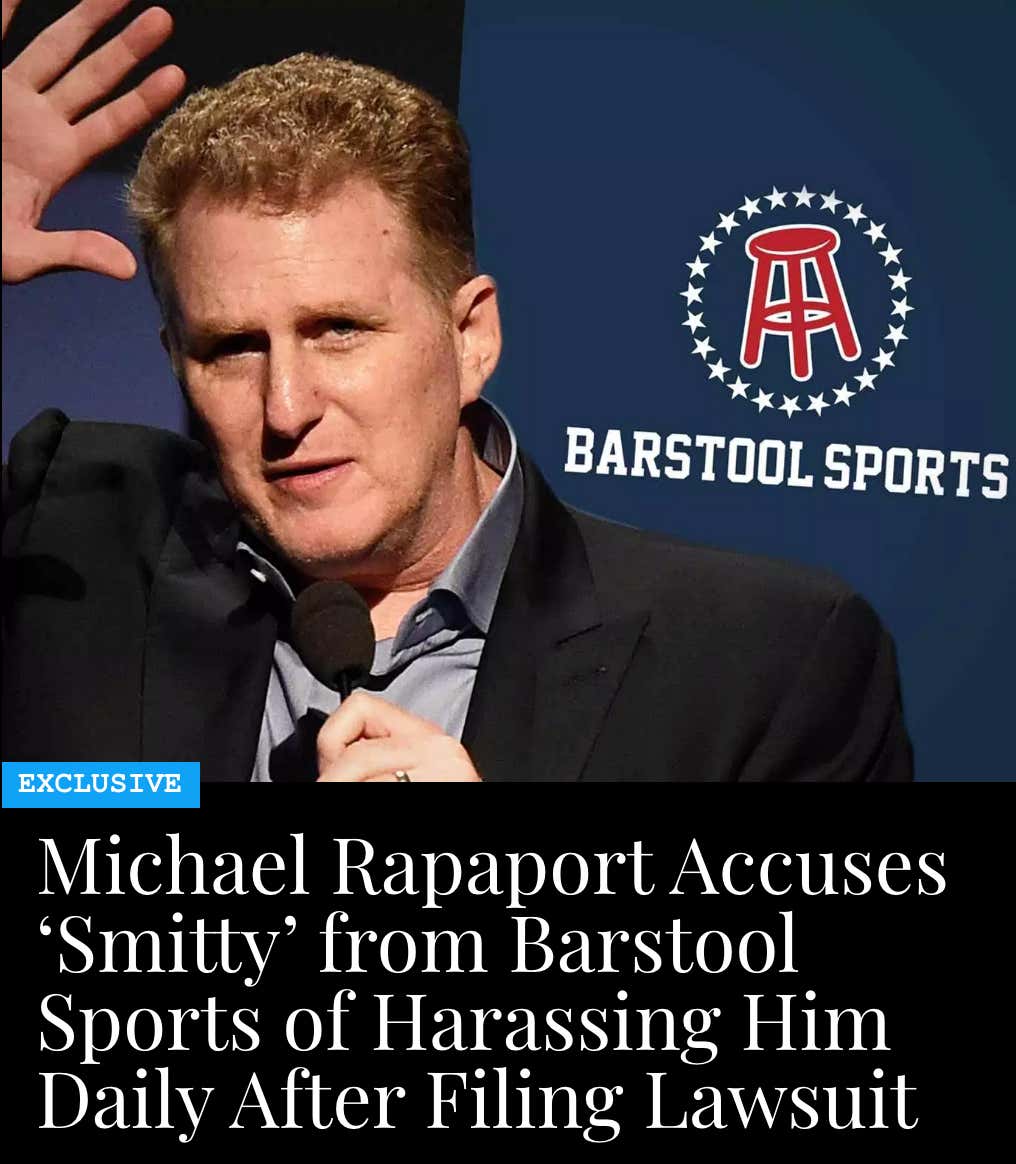 THE BLAST – Michael Rapaport claims his beef with Barstool Sports has only gotten worse since he filed a lawsuit against the company, claiming one of their staffers has been harassing him on a daily basis even after he sued them. According to court documents obtained by The Blast, Rapaport is taking issue with Barstool brushing off the comments they made about him having herpes. As The Blast first reported, on-air personalities Smitty, KFC and president Dave Portnoy filed court documents denying they defamed Rapaport with their countless comments about him and herpes. They argued any statements were simply insults and nothing more. In the documents, Rapaport says his former employer “engaged in a prolonged public campaign to defame and disparage Mr. Rapaport. The campaign continued in full force even after the filing of the Complaint with Defendant Adam Smith [Smitty] essentially attacking, defaming and disparaging Mr. Rapaport on what seemed like a daily basis from November 20, 2018 forward, until, presumably, his attorneys advised him to stop.” He says their argument that the herpes comments were opinion, and somehow had no clear meaning, is nonsense. Rapaport says they repeatedly made statements about him suffering from the STD and says the articles written make it appear as fact no opinion. “To be clear,” the document states, “Barstool and its employee cannot be allowed to hide behind the notion that Barstool is merely a ‘satirical comedy publication which frequently engages in “trash-talking” and provocative discourse’ to somehow justify its malicious defamatory campaign against Mr. Rapaport.” Rapaport is demanding his case move forward and the claims against Barstool Sports NOT be dismissed.

Um…Mikey. Harassment on what seemed like a daily basis until, presumably, our lawyers asked me to stop? Those are strong accusations thrown around in an actual court of law. Now, I’m no self-proclaimed “King Of Trash Talk”. All I, and my esteemed colleague Clickbait Smits, do is present reality as it was, is, and forever shall be. And that’s exactly what we’ve done. Since the lawsuit was filed, we decided to make things easy for the courts and re-posted the EXACT blogs Michael Rapaport cited in the lawsuit – VERBATIM. You can read one here:. And here again. And here again. And here again. And HERE AGAIN.

After those blogs were republished for the courts, and everyone, to easily access, we decided to learn more about the well known actor/celebrity/comedian who is indeed a public figure. For awhile, we simply released a certified fact about Michael Rapaport. No hyperbole, no conjecture, no defamation. Just stone cold facts about the life and times of Michael Rapaport. Here they are to read, again:

Fact #1: Did You Know Michael Rapaport Was Sentenced In A Court Of Law For Harassing A Woman?

Fact #2: Did You Know A 47-Year-Old Michael Rapaport Once Publicly (And Falsely) Alluded To Having Sex With His 19-Year-Old Co-Worker?

Fact #3: Did You Know That Michael Rapaport Insinuated Engaging In A Sexual Assault On Twitter?

Fact #5: Did You Know That Michael Rapaport Is…HOLY HELL THE HYPOCRISY IN THIS ONE IS INCREDIBLE!!!

Fact #6: Did You Know Michael Rapaport Gleefully Admits To Uninvitingly Touching An Actress’s Breasts While On A Movie Set?

Fact #7: Did You Know That Michael Rapaport Publicly Shames Random Women And Calls Them Pigs, Animals, And Other Derogatory Terms?

Fact #8: Did You Know Michael Rapaport Possibly Alluded To Comparing A Black Woman To A Monkey?

Fact #10: Did You Know On Michael Rapaport’s Podcast Women Are Described As “No Ass”, “Medium-Perky Tits”, And “Looking To Get Piped Out” At A R. Kelly Concert?

Fact #11: Did You Know That Michael Rapaport Tweets Out A Possible Pornographic Image All Children To See? (NSFW)

We encourage everyone to read through these blogs in which are based on what Michael Rapaport himself has said, done, and Tweeted. Since when is simply stating things a public figure has said, done, and Tweeted a form of harassment? That’s for the courts to decide, I suppose. And, no, the lawyers did not ask us to stop bringing such notions to light, we’ve just had better things to do with our time. However, after all of the things Michael Rapaport has been on the record of saying, doing, and Tweeting, it’s still amazing this man still is allowed to have a platform. For shame, Michael Rapaport. For shame.