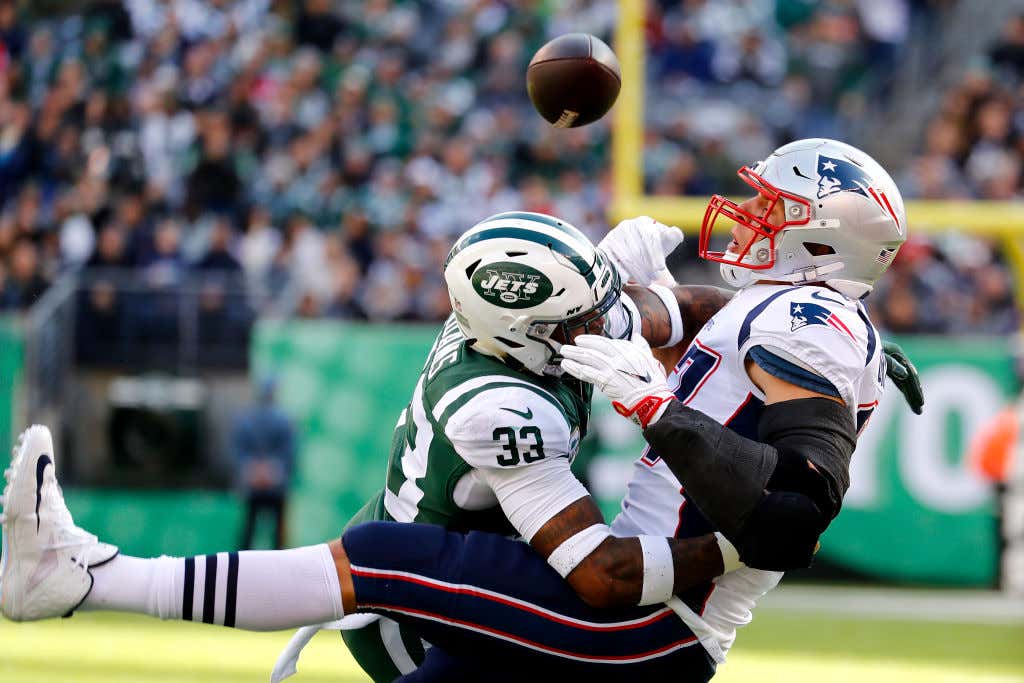 There’s not really much else to say about what happened yesterday. We all knew it was coming. Sure, we were coming off a bye week, but so were the Patriots and also Todd Bowles doesn’t do much coaching anyway so it’s kinda meaningless.

Honestly, I wasn’t even that disappointed by the Jets performance. That’s about all you can expect at this point in the season with Josh McCown under center. McCown was fine. Maybe even better than I could’ve hoped. The issue is when you can’t run the ball and you’ve got 3 solid receivers dealing with injuries so they can’t get any separation downfield, your offense is gonna look exactly like the Jets’ did yesterday. Every once in a while they picked up some chunks but it was mostly just boring, unimaginative play-calling void of any of the necessary shots to truly give New England a scare. More or less, the Jets showed up at home yesterday and played like a team that never really thought they had a chance to begin with, and it showed.

We’re still calling this a film breakdown because I looked at film and will include some (it’s literally all gonna be Jamal Adams), but for the most part there’s no need to go back and figure out why New England had WRs running across the middle wide open because we already know the answer; Todd Bowles is incompetent, shoutout to Frank the Tank.

Let’s get into it.

As someone who’s been rooting for a Todd Bowles coached team for longer than I care to figure out, nothing that happened yesterday should’ve been surprising. It wasn’t, but that doesn’t make it any less frustrating. When I think back on the game, there were 2 moments that pissed me off so much I had to walk away from the TV…

First, there was that situation when the Pats interfered with the LS on an extra point and got a 15 yard penalty. Any coach with a brain would recognize that you have 2 viable options then; you either accept the penalty and have the ball moved up half the distance to the goal and take your shot at 2 points, or you have them add the yardage to the kickoff and pooch the kick short to try and down the return man before the 25. Neither of those strategies are sure things or something that would’ve changed the outcome of the game, but seeing Todd Bowles choose to do neither just further proves how lost this man is trying to be the head coach of a professional football team.

Pretty much immediately after that, the Pats are driving in Jets’ territory before the defense makes a few stops and gets it to 3rd and short. The Pats next play falls incomplete, but there’s a penalty on the offense. Bowles is once again presented with the choice of declining the penalty and forcing Belichick’s hand on 4th down, or giving Tom Brady another shot at 3rd and long…

What did our HC choose? He gave the ball back to Brady who promptly threw a TD down the middle to Rob “I’m Not Dead Yet” Gronkowski. The outcome was so damn perfect it was almost poetic.

Again, neither of these moments truly would’ve changed the outcome here; the Patriots are just better, but it just goes to show how far away the Jets are right now from being a respectable and capable organization. I’m sorry I’m upset about it, and I won’t pretend I’m not.

As for Jeremy Bates? Yeah his game plan sucked and the Jets never really even tried to run the ball, but I can’t even blame him anymore at this point. Do I think he’s good at his job? Absolutely not, but I won’t sit here and pick his play calling apart while the Jets are trotting out this mediocre offensive line and 39-year-old Josh McCown to deliver the ball. It’s just not worth my time right now. We’ve got much bigger problems unfortunately.

I cannot reiterate this point enough. Sunday was another game that I don’t think I would’ve been able to get through with my sanity intact if it weren’t for Jamal Adams. He’s just so fucking good. He’s everywhere. He’s taken strides and can now matchup man-to-man with TEs like Rob Gronkowski, no matter how banged up he is.

If you watched the game you know what I’m talking about. He’s just an all-around stud and there’s really no other thing that should be said about him at this point. We’re lucky we at least get to watch him ball out once a week, because otherwise this season would be getting close to being completely miserable and lost…

At least until Sam Darnold comes back.

What a smooth segue by me if I do say so myself. This one’s pretty simple. The Jets don’t have an Eli Manning-esque playoff run in ‘em this year. The roster is flawed, more than a few coaches are probably on their way out, and Sam Darnold hurt his little footsie.

At this point, here’s what I’m hoping for. Sam Darnold needs to come back from this injury and get on the field. I want to watch the Jets win football games but I understand losses can be helpful too. Sam Darnold needs to keep getting more and more comfortable with the speed of the NFL game and learn how to make his progressions quickly without sacrificing decision making. Josh McCown CAN help with that.

If Robby Anderson and Quincy Enunwa stay healthy, Darnold’s already shown he can somewhat utilize their talent. Jeremy Bates can help his case or at least put some good offense on tape for his next OC interview. Even if the Jets don’t win many more games, those are good things that can happen on the offensive side.

As for the defense, it’s a little more complicated, but at the same time it’s not (deep, I know, just stick with me for a second here)… Everyone knows how much cap space the Jets should have headed into the offseason. We’re all quick to talk about how the Jets need to spend most of it on offensive weapons and fat boys, but if we’re being honest I don’t think anyone not named Jamal Adams, Avery Williamson, Darron Lee, or Trumaine Johnson (because we’re paying him so much) should feel like their job is safe.

Notice I didn’t include Leonard Williams? That’s because I didn’t. At this point, I’m open to Mike Maccagnan or WHOEVER ends up making these decisions being honest and evaluating the performance of everyone on this roster, regardless of how highly they were drafted or how good their quotes sound in the post-game locker room. The rest of the year should be used for evaluation, and if any of these guys don’t recognize how important it is that they show improvement and consistency, they’re probably not someone that’ll be missed in the locker room were they to get shipped out…

Did I just write a cover letter for the soon-to-be available Jets’ GM position? Maybe, but I don’t plan on formally applying until I’m certain I can pass the drug test.

Stay tuned for more New York Jets content as we stumble into the final portion of the regular season. Don’t ever think you don’t deserve better than this. We all do.