I love Thanksgiving. Christmas can bring high expectations, greed, and disappointment (there are few feelings worse than watching a loved one open the gift you carefully selected with a “oh, that’s nice, thanks” as they quickly push it to the side). Not Thanksgiving, though. Thanksgiving brings out the best in people. While I’m not a fan of the origins of the holiday, I am a fan of stuffing my face, drinking good wine, taking a moment to be grateful… and football. 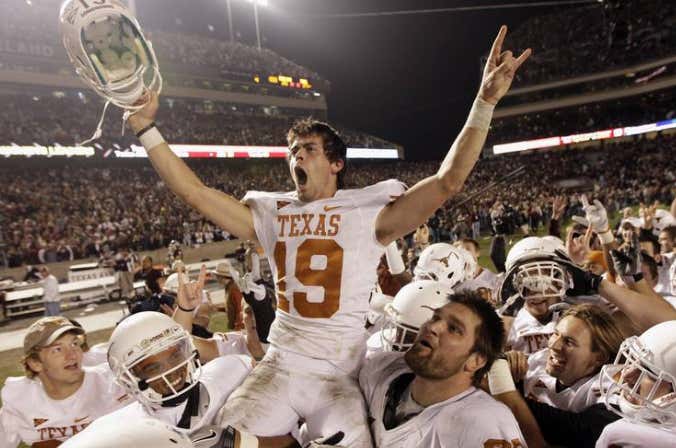 Damn do I miss watching Texas play Texas A&M on Thanksgiving eve. It was (when you haven’t played each other in 7 years, it’s definitely “was”) one of the best rivalries in college football and watching the grudge match behind a cloudy haze of tryptophan, stuffing, and pie was completely wonderful. Even the years we played the Friday after Thanksgiving, in my house, the whole family would come for leftovers and the game. Then A&M decided they were too good for the Big 12 (shoutout unnecessary Longhorn Network for being the straw that broke the Aggie’s back) and wanted to make money (mission accomplished), so they peaced out, leaving the rivalry in the past.

He probably got high as fuck after that game (and every game). Good times.