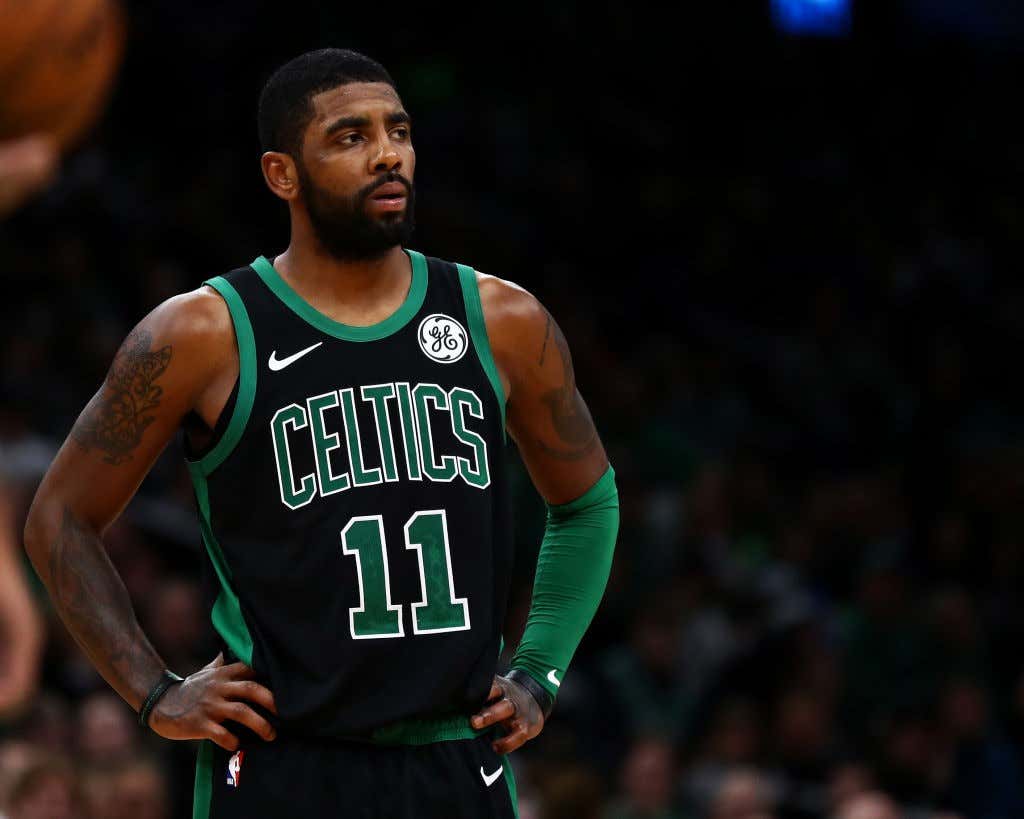 What better way to take all the wind out of your sails after the best win of the year by coming out and not being able to break 90 points. Just when you thought maybe, just maybe the Celtics were starting to turn a corner offensively they quickly kicked us right in the balls and reminded us not to get too ahead of ourselves. Now remember, this year with added expectations we all have to do our part to make sure this season is a success. Well, are we sure the Celtics even know the point of basketball is to put the ball in the hoop? That may sound crazy, but given their start offensively are we sure? So allow me to do my part and help them with their most glaring issue

If someone could make sure this was playing in their next film session myself and the rest of everyone who roots for this team would greatly appreciate it.

On a more serious note, what the hell. There was a pretty fierce reaction on Twitter last night after this loss and I get it. As pumped as everyone was after the TOR win, that’s how enraged they were with this loss to a Western Conference team that in no way whatsoever impacts any potential tie breaker. I’m not going to sit here and tell you I wasn’t frustrated, I have eyes and a brain, but at the same time I think the overreaction was a little much. It was trade Player X, bench player X city last night and nobody can sit here and tell you this team hasn’t been complete dogshit offensively to start the year, but 48 hours ago we were cueing duck boats after Kyrie dropped 43, and now suddenly this team is doomed. It’s exhausting.

When every quote coming out of this loss is about their toughness and how they are soft and all this stuff, that’s the bigger issue for me. Yeah guys make and miss shots all the time, but the one thing that should never change with this team is their energy, effort, and toughness. So if you want to be mad about something last night, be mad at that because under no circumstances can that shit fly.

Alright, you know the rules, we come to this blog and puff our chest out when the Celtics play well, and we also come and take our medicine when they blow donkey dick. This is one of those times so let’s get started.

– There’s certainly not much to talk about amirite? At least Kyrie has maintained his strong play ever since getting his haircut, which is a relief.

He finished with 20 points and 8 rebounds on 8-16 shooting, and honestly was really the only one who showed up. He only had 1 assist but that’s not because he was selfish or anything it’s because his teammates shot the ball like it was the first time they’d ever played the sport. Kyrie was the only one who really attacked the basket, with 5 of his 8 FGM coming at the rim. If there’s one thing you can’t get on Kyrie for, it’s his offensive approach since like the first week of the season. He’s been great.

– Yabu tied for a team best +5 and had 9 points and 2 steals in his 9 minutes. Kings doing King shit if you ask me.

– Hey, at least the defense still rules. I’ll take keeping a team to under 100 on 44/28% splits. At least the Celts had another strong showing when it came to defending the three point line, and nobody had a career night this time around unlike the last time these two teams played so that’s progress!

– Believe it or not but the Celtics won the rebounding battle, the points in the paint battle, the second chance points battle, and had 17 OREB. They also were down by as many as 22 points so that’s fun!

– Right off the bat we should have known something like this was coming because the Celtics wore their black alternates at home. Who the hell allowed this to happen? Whoever thought this was a good idea deserves a stern talking to. Under no circumstances should the Celtics ever not wear the best uniform in sports when playing at home. Look good, feel good, play good ever heard of it? My question is, if they are going the alternate route, why not rock the new City Editions? Why is every other team wearing theirs and yet we haven’t so far? I need answers on this from someone who knows.

– Alright, let’s just get this over with and address the elephant in the room. This team can’t shoot right now. It doesn’t make sense so don’t ask me to explain it, all I know is what my eyes and the numbers tell me and it’s that this team is allergic to making shots. Pretty frustrating considering they looked so good the night before both in terms of approach and execution, which is what is so enraging. Here are the facts

*On wide open shots (defender 6+ feet away) the Celtics shot a combined 5-21. That’s a cool 23%. The biggest culprit was obviously Jaylen who went 0-4, and outside of Al who was 3-6 on these type of shots, it was a disaster for everyone else.

*On open shots (defender 4-6ft away) the Celtics shot a combined 7-25. That’s a cool 28%. The biggest culprits here were both Tatum and Terry, who went a combined 0-6.

So as you can see, going 12-46 on open/wide open shots is pretty pathetic and makes it nearly impossible to beat any NBA team let alone a Jazz team that is pretty good. This wasn’t a case of the Celtics offensive system struggling, they took 91 FGA total, so over half were either open/wide open. It’s not a system issue, it’s a guy can’t fucking make a shot issue.

When you go 5-33 from deep, and your starters take just 5 combined FTs, what exactly do you expect to happen?

– It’s pretty clear Kyrie and Brad and Al are getting a little fed up with the young kids. I know the internet wants to put everything on Jaylen, but Tatum hasn’t been all that great in terms of energy and toughness either on a consistent basis and I think that’s who Brad and everyone was talking about last night.

Brad is obviously sick of their shit, and while we all thought all this added experience last year was going to help them feel more confident this season, it’s almost had the opposite effect. I think this quote said a lot

I think people don’t want to put any blame on Tatum because he was so good last year, but let’s be truthful for a second. Both of the Celtics young guns have been pretty inconsistent this season on both ends of the floor, and it would not shock me if Brad did something drastic to send them a message. Frankly it’s a little bullshit that this sort of stuff is still going on, like sure it’s early but not THAT early, and you would think they both would have learned from their early struggles and would bring that toughness and energy every night. That hasn’t happened.

– Why is it that the Celtics biggest strength is their perimeter defense from their guards, yet in both games against the Jazz this season no guard could prevent Ricky Rubio from looking like a HOF player? He killed them in UTA and then again last night went 6-13 for 20 points. How is that possible?

Well, let’s look deeper. In my opinion, the defensive production from both Smart/Terry has been a big problem this season. You may not want to hear it because the narrative around Smart is that he’s a great defender, but this was yet another game where they haven’t been able to stop a nosebleed.

This is what annoys me. We hear about Smart yelling in the locker room about no excuses and all this shit, well how about we see it translate onto the floor? The whole point of these two is that they were going to be able to lock down the opposing team’s second unit, and we’ve seen the exact opposite so far.

– Then you have their production on the offensive side. Remember how deep this team was supposed to be? How their bench could fuck with most starters? Well Mook/Smart/Rozier going a combined 5-20 is pretty pathetic.

– If you can believe it, this was a close game entering the third quarter. Honestly we’d seen this script before, the Celtics come out and drop 20 in the first quarter which usually means they are going to come out in the third and kick some ass. HA! Jokes on us! They came out and scored 17 points on 30/0% splits and had a shot chart that looked like this 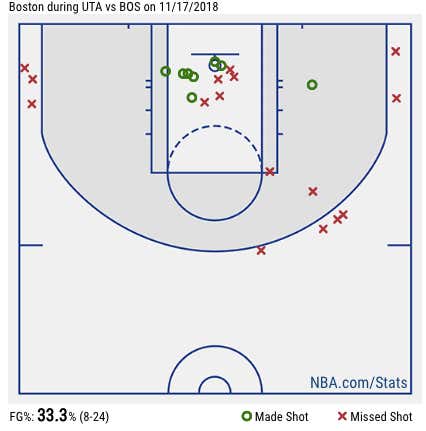 anytime you can stop going to the basket where you had success in favor of jacking it from deep on a night where you couldn’t buy a basket you have to do it. Assholes.

– We can be honest, Jaylen is beyond struggling right now. In my opinion it’s not a usage problem, he’s essentially being used the exact same way and amount as he was last year when everyone loved him. This year though, you can’t really describe his start any other way than a complete disaster. As expected, he was the scapegoat for many last night and that’s just what is cool on the internet streets right now. He’s shooting the ball like shit, there’s no way around that, and what frustrates me is the inconsistency in his game. How many more times is he going to see himself play well by attacking the basket and then the next night do nothing but shoot from deep? He took 9 shots last night and 6 of them were threes. Where is the driving? Where is the aggressiveness to get to spots where he can be successful?

It’s not rocket science. When Jaylen drives first and shoots second, he’s a completely different player. This is why I have no problem with Brad waiving the white flag and playing his bench for the fourth quarter. If his starters are going to be stubborn and not play the right way, they don’t need to play. Period.

What I don’t want to hear is the lineup needs to be changed. No it doesn’t. As you already read, the Celts missed nearly all of their open looks. How does a lineup change make the ball suddenly go in? In my opinion, this group needs to play through whatever is plaguing them right now. It wouldn’t shock me if Brad inserted Baynes for a game or two, but I am still of the faith that if we are going to have to rely on this lineup in the Spring, then I want them playing as much time together as possible. I get it, things are bad right now, but nobody wanted to change the lineup after beating TOR, so try not to overreact too much. This team has already beaten TOR/MIL/PHI which is what matters. Losing to the Jazz doesn’t really impact all that much.

What’s the one thing we know about this team? They never make things easy on themselves. It’s just not in their DNA. I think we can all agree this start is pretty unacceptable, but it’s not even Thanksgiving. Eventually we won’t be able to play the “it’s early” card, but again the missing of shots shouldn’t really concern you. The toughness and the energy issues are the bigger problem, and I’d like to believe there are too many dogs on this team to have that be a constant issue. Things don’t really get all that much easier with Kemba on Monday, who you may have heard just had 60, so I’m going to need this team to wake the fuck up and play the style of basketball we know they can play.

And that’s a team that isn’t Charmin soft. 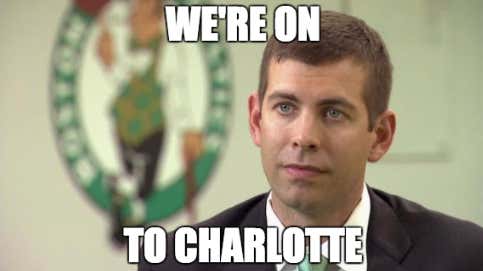