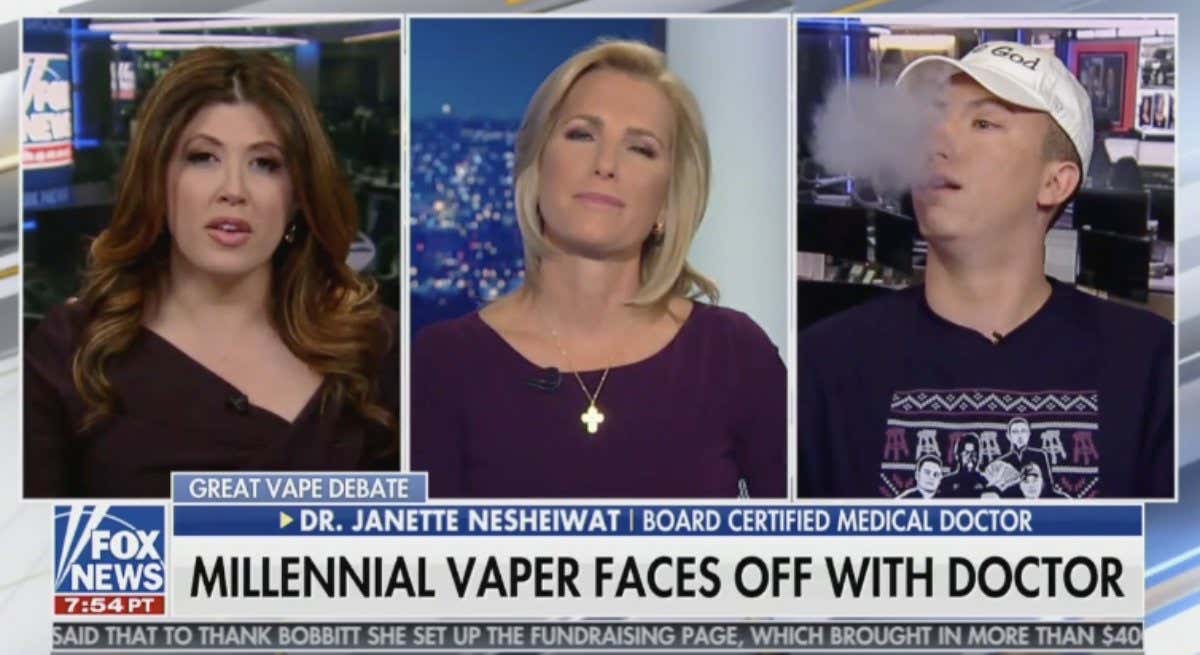 Yup. That’s me. You’re probably wondering how I ended up in this situation.

A not hot 22-year-old male just humbly asking how to get more Instagram followers. Well, it turns out all you have to do is make a sick juul video and get on national news. Way easier than I thought it would be.

I was spitballing ideas with my idea team on possible Instagram videos. Ultimately, landed on doing a sick juul tricks video.

Pretty clearly a sarcastic video …. So I thought.

Posted that on Tuesday. About a half hour later, news broke that the FDA is basically trying to shut down the Juul industry. Coincidence? I think not.

Fast forward to Thursday afternoon, I got a DM from a girl who works at FOX News for the Laura Ingraham show. The message read

“Hi – I work for Fox News Channel and we’re doing a segment tonight on vaping for The Ingraham Angle. Would you be available to join and defend the art of the vape? Would be at 10:45pm ET”

Hell yeah. I got the approval from the higher-ups and was ready to rock. Announced it on Barstool Radio and spent the rest of the show getting tips from Feits, Riggs, The Cat, and callers. People did not have much faith in me.

Haters be my motivators, as they say.

Went to Lids to get a custom “Vape God” hat. Just really lean into the role as ultimate millenial vaping douche. Then did some practice interviews with Big Cat and PFT. I got some good advice from everyone in the office, and it was time to roll.

Radio Bren stepped up to the plate big time and came with me as a personal cameraman. We’re working on getting that behind-the-scenes video out soon.

We got to the FOX News building and the producer that greeted me was definitely surprised. He was a nice guy, and I was being very polite and normal. Quite the juxtaposition considering I had a “Vape God” hat on and was wearing an ugly sweater with my face on it holding a fat stack of cash.

We chilled in the green room and then I went to get some make-up. Also had the college football show that morning so second time of the day getting make-up. I’m addicted to that glow.

While I was in the chair, the doctor introduced herself briefly. I played nice. She had no idea what was about to hit her.

The producer escorted us both down to the studios. I vaped the whole time. The producer said “I have a feeling you guys will be best friends by the end of this.”

They set us up in different recording studios. I sat on a chair, got mic’d up, and had the monitor/camera in front of me. They were really strict about making sure I looked at the camera the whole time.

They started with a tease of what was to come.

And then we got into it. It was a thorough domination, if I do say so myself. Here is the full 5 minute video. I’m putting two links in case one gets taken down.

And here’s a minute video with some of the highlights

If you told me a year ago, hell if you told me 9 days ago, that I would be on FOX News defending vaping against a board certified doctor….. Well I just wouldn’t have believed you.

I walked out of the room to a mixed reaction. The producer in my ear said, “That was perfect. You’re trending on Twitter.” Someone else outside said it was like an SNL skit. There was one lady who was none too pleased with me. She asked for my full name. I gave it to her, she turned to someone else and said “Who vetted this kid? Did we do any research on him.” She then wondered if I got permission to post the video of the makeup woman. Take a hike, lady.

And that was a wrap.

The feedback has been great from Barstool people. It has been terrible from the Fox News crowd, and the vape crowd.

My Instagram DMs are an absolute war zone right now. 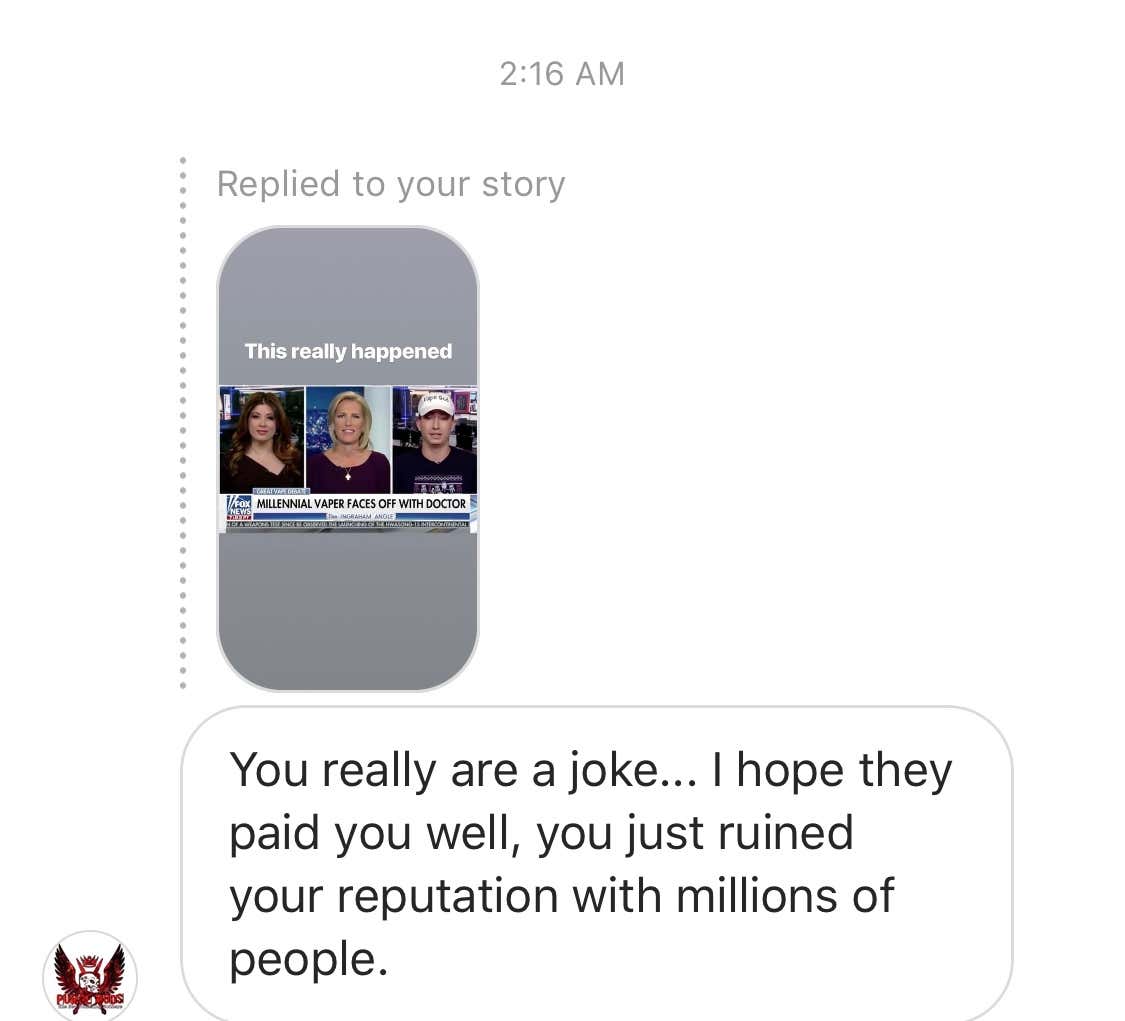 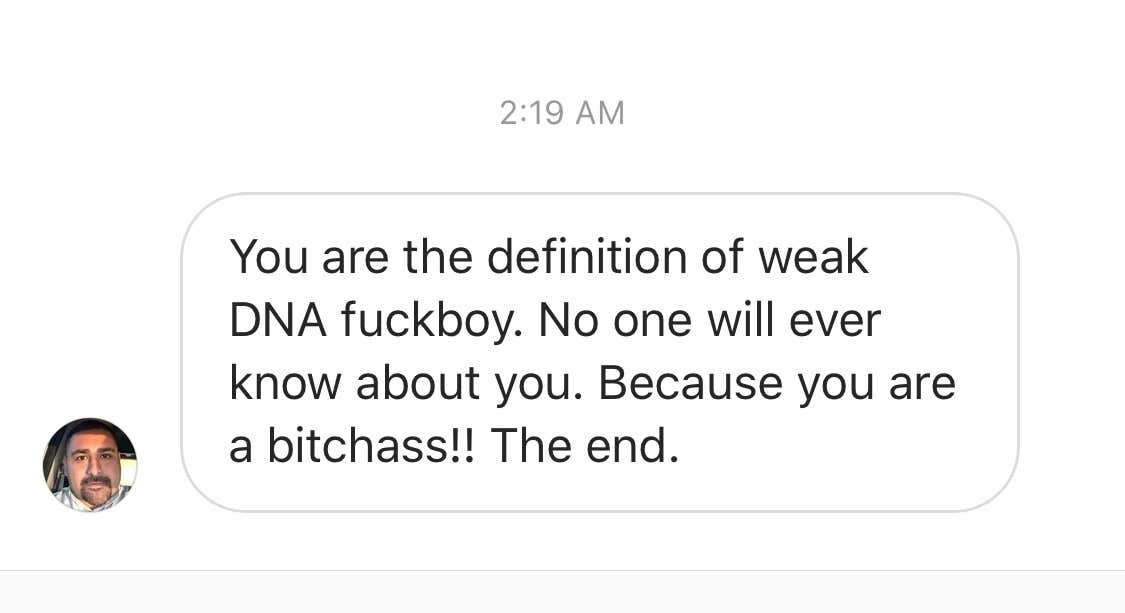 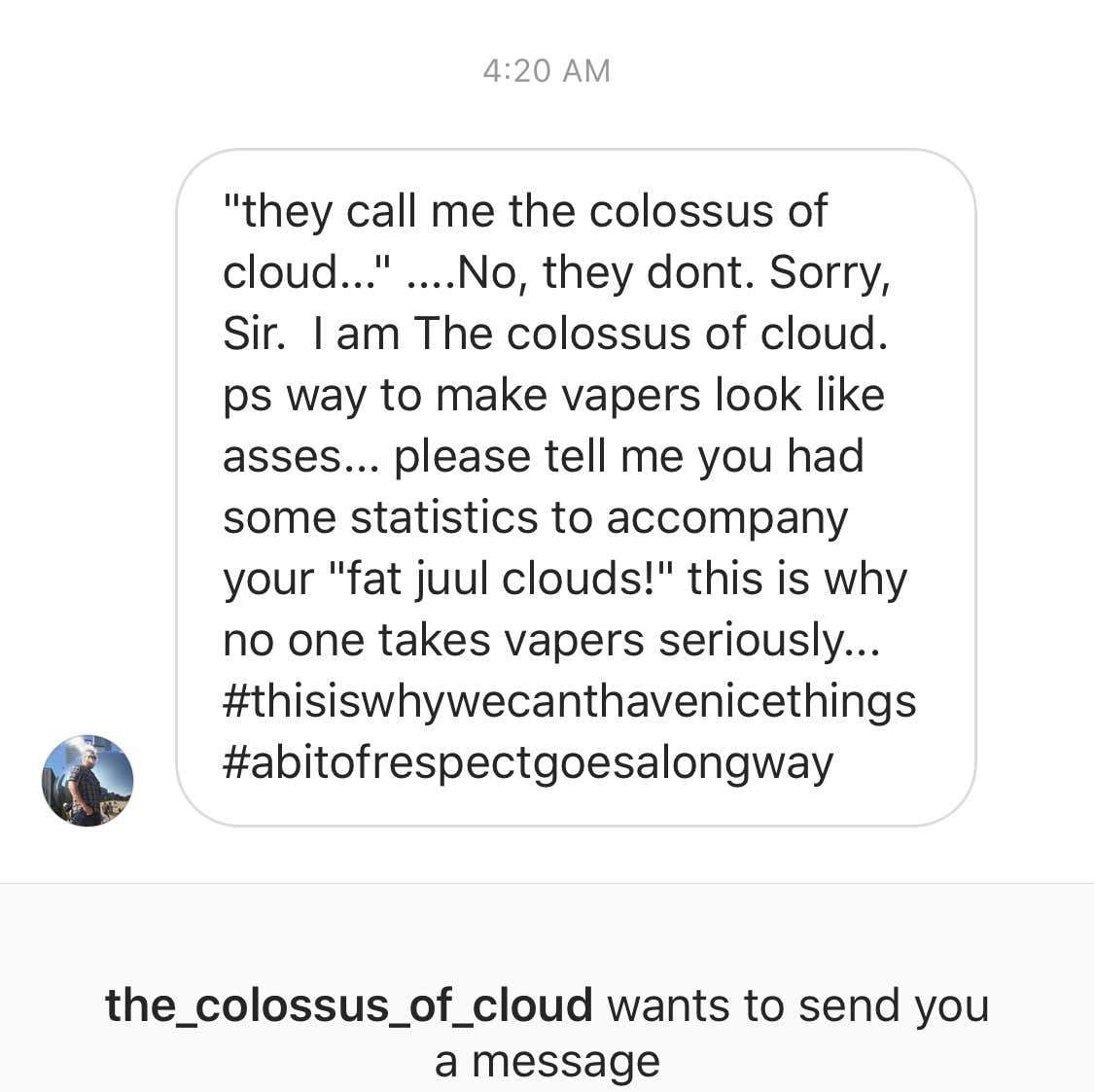 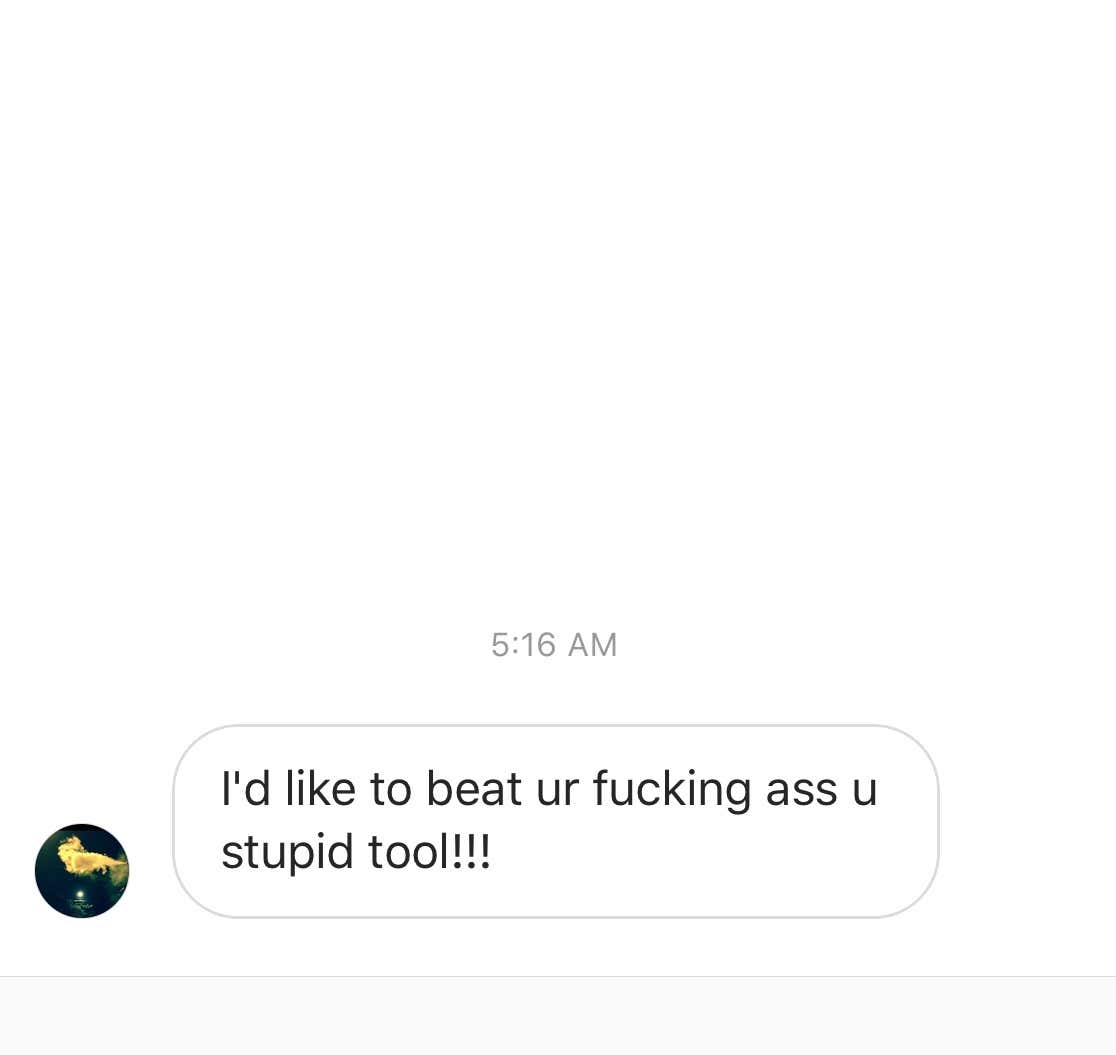 Some legit news outlets even picked it up. 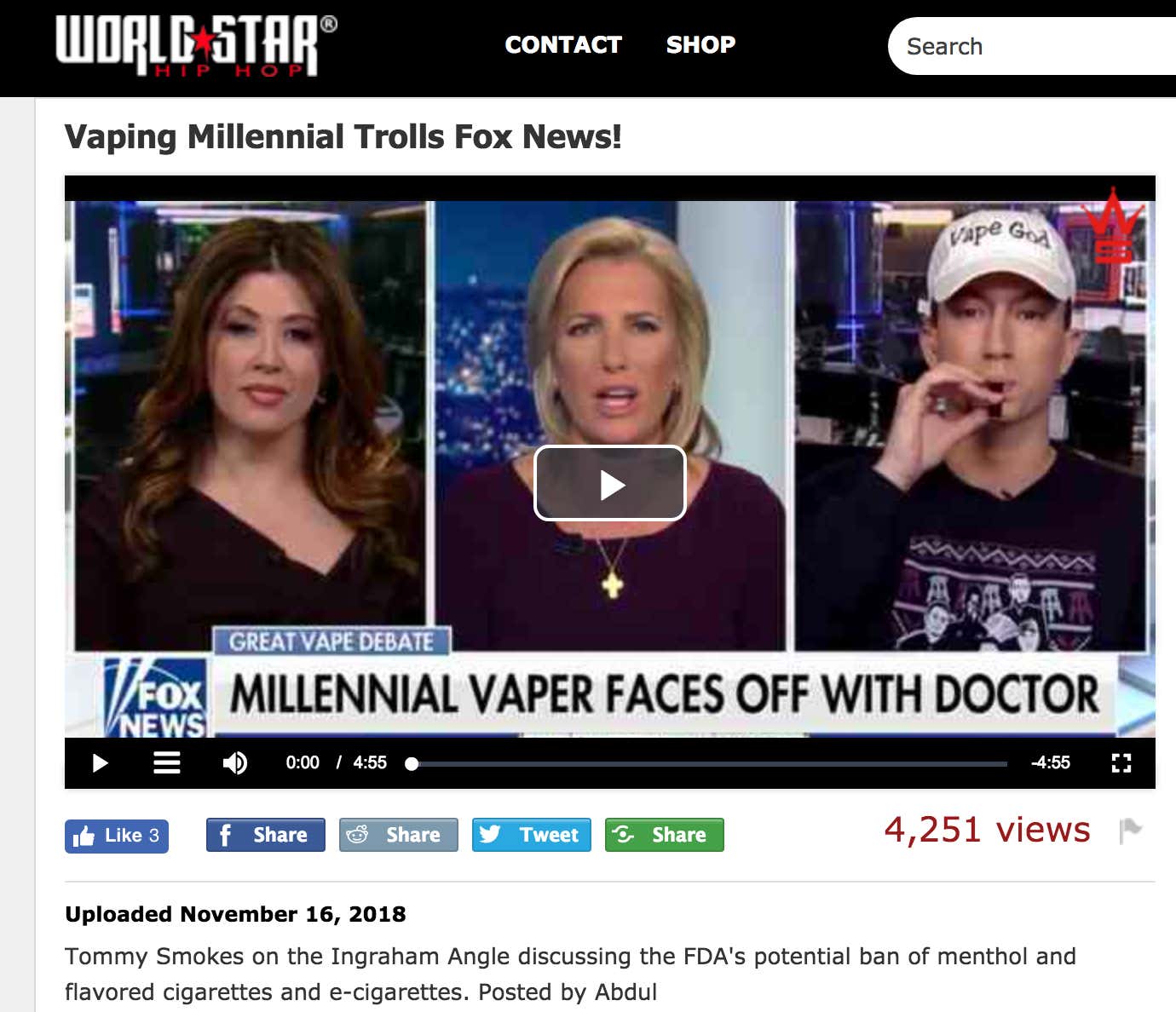 What a world. What a god damn world.

People laughed at me two weeks ago when I lauded my acting performance as a bucking bronco on Advisors. Well, to anyone out there who says all I do is get spanked/fondled/ridden by Dave, picture me blowing a fat cloud in your face. I’m more than that. I’m the Vape God.

PS: Vape God hats are on sale for the next 24 hours only. Get ‘em while you can if you want some drip.