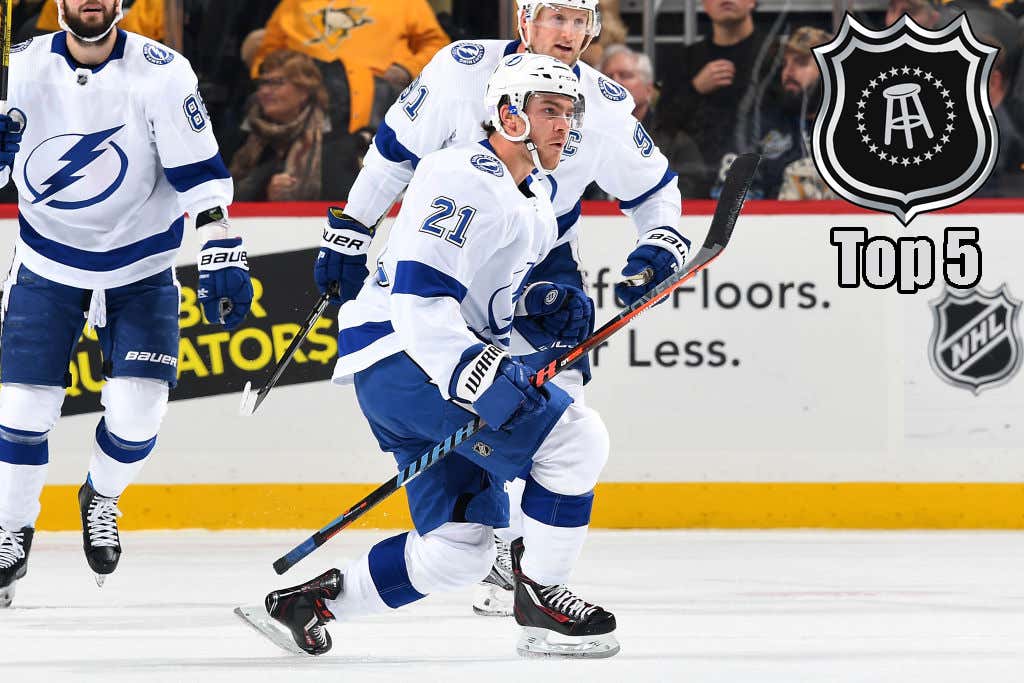 Brayden Point started coming onto the scene last year when he put up 32 goals on the season and ended the year with 66 points. The Lightning were looking for someone to step up after trading Jonathan Drouin to Montreal and turns out Tampa’s 2014 3rd round pick from Moose Jaw is better than their 2013 3rd overall pick from the Mooseheads has ever been. And in case you thought last year was just a fluke of a year for Brayden and that he’d regress this year, well guess what bitch? You’re dead wrong because through 19 games this year, Brayden Point has 22 points on 12 goals and 10 assists. And goals 10, 11 and 12 all came within 91 seconds of each other last night in Pittsburgh. We’ll get to that later but for now, let’s just rip up the top 5 goals from the NHL last night.

5. The Ultimate Spin Zone, Courtesy Of The Columbus Blue Jackets

That was like some synchronized skating shit right there. The spinning assist from Zac Dalpe to the spinning tuck from Markus Hannikainen. Two guys who I don’t think I’ve ever even heard of before combining for one of the slickest goals of the night.

For Hannikainen, that’s his 5th career goal. For Dalpe, that’s his 25th career point. Both of these guys are bouncing around between the NHL and the AHL. I can’t imagine either of their roster spots with Columbus are necessarily permanent. But do you think they give a shit about that? Heck no. They’re just out there greasing it up with the boys and putting on a little dangle show out there. Love when these types of beauties get a chance to shine.

4. Anthony Beauvillier, Stealer Of All Hats

It was a pretty big night for hat tricks last night. This one may not have been a natural hat trick in 91 seconds of gameplay, but it only took Anthony Beauvillier 25 minutes against the Rangers last night to tuck 3 away for the first time in his career. Now for the most part, Beauvillier was playing “just the tip” with Henrik. But his 2nd goal of the night was some straight up alfredo after this saucy dish from Valtteri Filppula.

Extra sauce on that apple from Filppula and then Beauvillier goes short side on “King” Henrik. Lundqvist had no idea what just hit him. Buddy, do you really think that Beauvillier is going to fall for you baiting him to go glove side? Get real. That trick may have worked 10 years ago but not anymore. Beauvillier baited Lundqvist into baiting Beauvillier to go glove side. Rangers thought they had a nice little cupcake game in store when they were up 2-0 less than 10 minutes into the game. Then Beauvillier came out to play and it was game over from there. 4 goals on the season for the kid, and 3 of them came last night at Barclays. Not a big deal.

3. The Best Alley-Oop In Minnesota Isn’t Coming From The Timberwolves

We had an alley-oop in the Tampa game the other night from Alex Killorn dishing it up to Anthony Cirelli. The NHL is a bit of a copy cat league so I’m assuming a bunch of guys on the Minnesota Wild saw that play in my “Top 5 Blogs From The NHL Last Night” blog the other day and decided to give it a go themselves last night against Vancouver. And the end result? Well it was majestic.

The perfect amount of air and touch on the lob from Brodin. And then the perfect amount of speed from Charlie Coyle to blow past the Vancouver defenders and get to that puck in time to still make a move on Bachman. And then on top of it all, he’s coming down on Bachman at full speed trying to pick up a bouncing puck and he’s still able to go with a nice little forehand-backhand roof job. Decent work from the good ol’ American boy.

2. Freddy Anderson With The 115′ Primary Assists To Mitchy Marns

Freddy Anderson with a potential primary assist of the year. From his crease, lobs it up, Marner snags it out of the air at the blue line, pulls up at the top of the circles and then it’s bombs away. Not only does Anderson get the primary assist on this goal but when you couple in the play he made to Marner along with the fact that Martin Jones was completely frozen by this shot at the other end of the ice, well that makes for a pretty sexy highlight. And to top it all off, that goal ended up being the dagger on the game. Leafs took a 5-3 lead with about 6 minutes left to go in the game and that’s all she wrote. Anderson finished the night with 42 saves and an assist. Not sure if the Leafs need Nylander anymore when their goalie is dishing out apples like that.

1. 3 Tucks In 91 Ticks For Brayden Point With The Fastest Natural Hat Trick In 27 Years 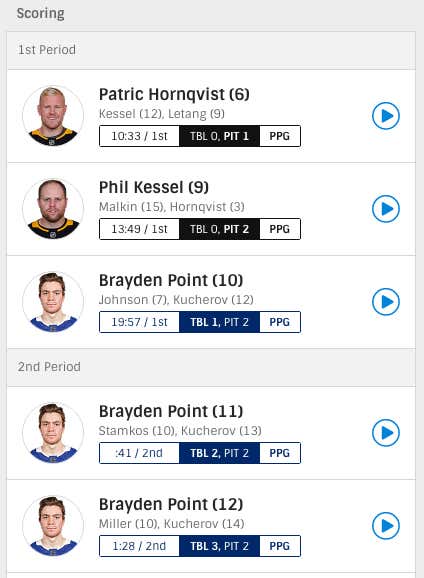 Now granted, there were 20 minutes in between goals #1 and 2 for Brayden Point last night with that first intermission. But he scores the first goal of his night with 3 seconds left on the clock in the 1st period on a 5v3 powerplay. The GIF isn’t going to do this goal any justice since you can’t hear the ping of the pipe on this snipe, but this was a missile tot close out the period.

Then the boys head into the locker room for the first intermission. They finally got themselves on the board and they’re buzzing. They still have some time left at 5v3 since the Penguins are bozos and took 3 penalties in the final 30 seconds of the first period. So the Bolts head back out on the ice for the 2nd period with another 5v3 powerplay ahead of them and that’s where Kucherov and Stamkos go to work.

Just a filthy play for an easy tic-tac-toe tap in for Point on that back pipe. Poor Matt Murray wishes he could go back onto IR after getting put through the ringer like that. If Steven Stamkos gets that puck teed up at the top of the circles on the powerplay, he’s ripping that one-t at least 98 times out of 100. This happened to be one of those times where he didn’t decide to rip a hole through the back of the net, slap passes it over to Point and now he has 2 goals in 44 seconds, both at 5v3.

So now the Lightning are back to a standard 5v4 powerplay. They’ve already scored twice courtesy of 3 Pittsburgh penalties. Even if they don’t score again on this powerplay, it’ll be a massive success for the special teams. But the Bolts aren’t done yet and more specifically, Brayden Point isn’t done yet. Because just 47 seconds later, he does it again.