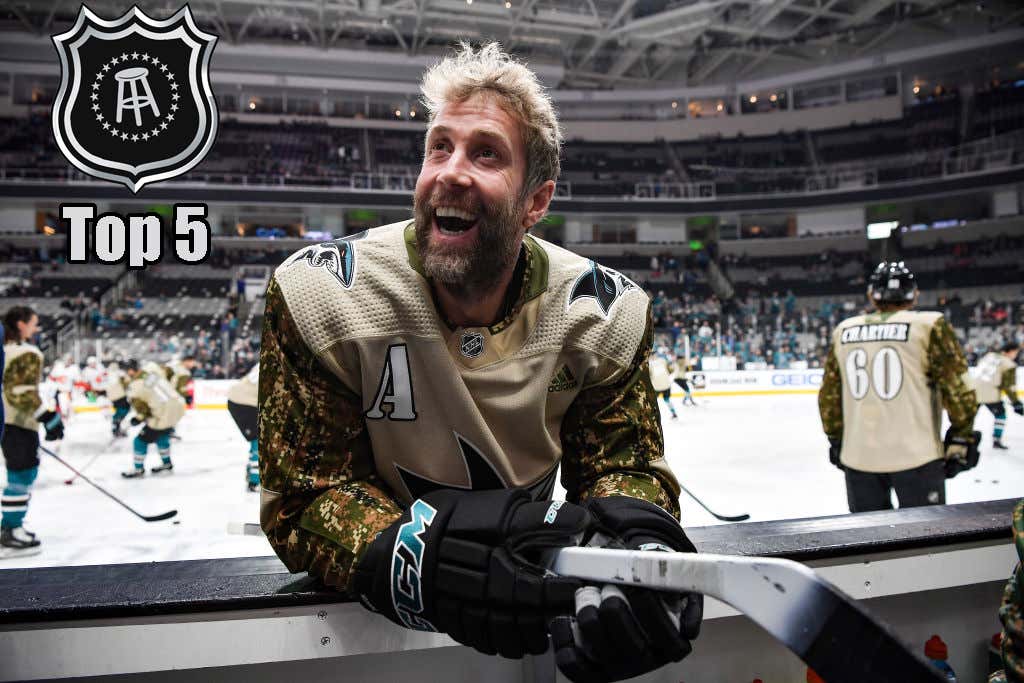 If a child was born the day that Jumbo Joe Thornton was drafted 1st overall in the NHL, that kid would be a junior or a senior in college right now. Everybody who was born the day that Joe Thornton was drafted is of legal age to drink in the United States right now. So when you think about it that way, it’s been a pretty long time coming for Jumbo to get to career goal #400. But here’s the sick thing about this son of a bitch–Wayne Gretzky has scored the most goals in NHL history with 894. I firmly believe that if Joe Thornton really wanted to, he could have been somewhere around 2 or 3 on that list by now. The only issue is that the dude hates to shoot the puck. He’ll be on a breakaway coming down on an empty net and he’ll still try to find a way to pass the puck and get an assist instead of the goal. Every time Joe Thornton scores a goal, he’s doing it against his will. So 400 career tucks for a guy who hates scoring and would rather pass? That’s some legendary shit right there. More on Jumbo later but for now, let’s get to the top 5 goals from the NHL last night.

Over the summer it seemed as if Marc Bergevin was competing with Pierre Dorion to be the most incompetent GM in the league. He traded away Max Pacioretty and Alex Galchenyuk in what seemed to be pretty necessary moves for the team moving forward, but I think a lot of people were underwhelmed with the return he got for both of those guys. Especially so in the Galchenyuk for Domi trade which ended up just being player for player. However…Max Domi is proving to be the perfect case of a kid who just needs a change of scenery to get himself going. In just 18 games with the Habs so far this year, Domi has scored his 10th goal and this was a fucking sniiiiiiipe.

His 10th of the season and that is already more goals than Domi had all of last year and the year before that. He had 9 goals in each of the previous 2 seasons and his career high was 18 goals his rookie year. The majority of the hockey world was shocked that Bergevin didn’t at least get a pick or anything else along with Domi in that trade for Galchenyuk but as it stands right now, Bergevin is coming out on top. Domi has the ability to be a little shit sometimes and that comes along with the last name. But he has wheels, he has hands, and now Koskinen knows that Domi can pick corners for days. Unfortunately that’s not the case for the rest of the Canadiens and they’d end up losing this game 6-2. But whatever.

Alex Killorn–much like our good pal Cousin Riggs–once played hockey for Harvard University. Maybe you’ve heard of it before. And since Killorn went to Harvard, that automatically makes him a nerd. And in being a little nerd who walks around with a pocket protector and his calculator on him at all times, Alex Killorn clearly knows a thing or two about geometry and physics and all that shit. Which allows him to figure out the perfect angle/velocity to send this alley oop pass to Anthony Cirelli last night.

Clears the entire neutral zone. Rookie Rasmus Dahlin gets a little ahead of himself and thinks that he can intercept this pass but all he does is take himself out of the play. The pass perfectly springs Cirelli behind the defensemen, and then Cirelli settles the puck a little before going calling dibs on the top bunk. Beautiful pass, beautiful snipe. But like the Habs–the Lightning went on to lose this game.

3. Never Take A Penalty Against The Toronto Maple Leafs. Not Even Once

People make mistakes in life all the time. Some mistakes are small and ultimately pretty inconsequential. But other mistakes? Well other mistakes are catastrophic and have horrific repercussions. An example of said catastrophic mistakes would be to take a penalty against the Toronto Maple Leafs. Because the moment you put this team on a man advantage, this is what happens to you.

WARNING: The GIF you are about to witness is extremely graphic and should not be viewed by children under the age of 14 without the supervision of adults.

Johnny T. To Mitchy Boy The Prince. To Naz Kadri and in the back of the net. This was surgical. It doesn’t get much cleaner than that. That puck movement from Tavares and Marner is still illegal in most states. Both guys disguise the pass as a shot. You see Martinez drop down to a knee to try to block that Tavares “shot” which ultimately takes him out of the play and opens up all that space in the slot for Kadri to stay open. 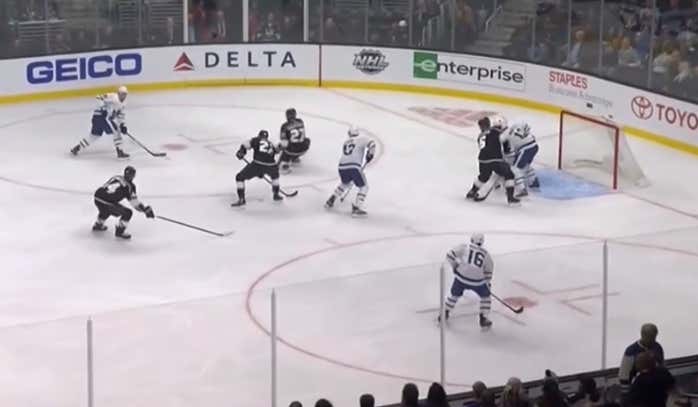 The fact that Tavares was able to thread that pass through to Marner in the first place is ridiculous. But now watch as Martinez thinking that Tavares was shooting that puck allows Marner to go right back through the slot to Kadri. 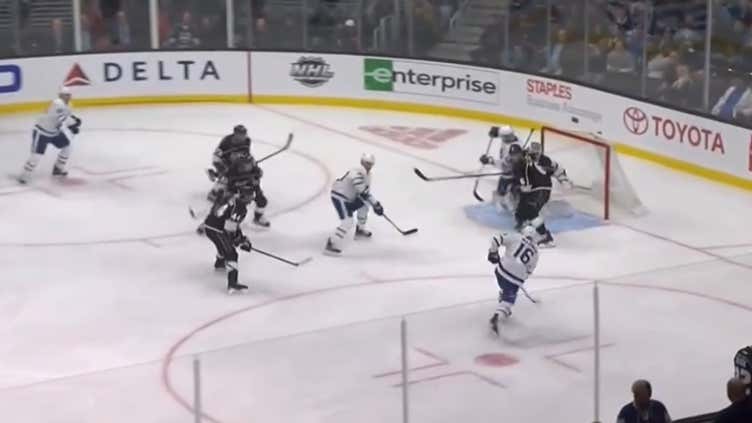 He can’t recover in time and Kadri is practically naked in there. But even with a naked Kadri in the slot, everybody thought Marner would take that shot. Especially Peter Budaj who even threw his glove out there to try to make the save. 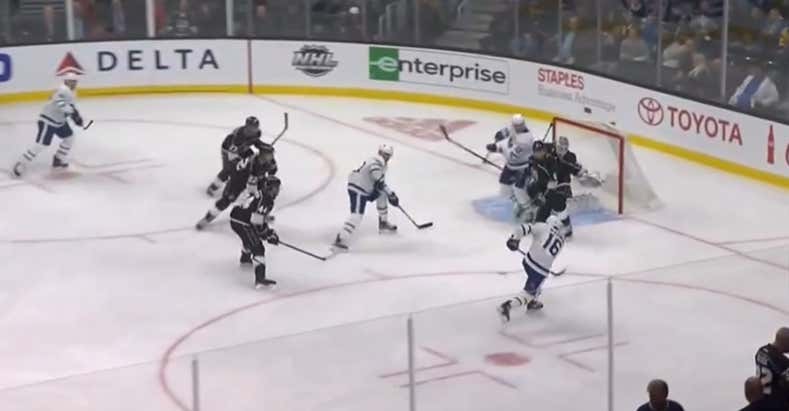 That’s what we like to call a clinic. Glad the Kings powerplay got to see what a real PP unit looks like. I’m sure they’ll be able to use this film at practice today.

So I already talked about Joe Thornton’s career a little bit above so we won’t get into that anymore right here. But how about career goal number 400 from Jumbo? What a fucking display of dominance right here from the San Jose Sharks against one of the top teams in the league. Joe Pavelski had just scored his 2nd goal of the game to tie it up at 4-4 in the 3rd period. Then the ensuing faceoff takes place at center ice, Joe Thornton wins it back cleanly, and 13 seconds later it’s in the back of the net again for the win.

That puck first touched Justin Braun’s stick 6:48 down in the corner and 6 seconds later Joe Thornton scores his 400th career goal. Just look at how sick of a play this was from Braun.

From the corner to the red line. Great hands by Sorenson to snag that puck out of the air and snap a pass off right in Jumbo’s wheelhouse. That’s a sick play in general but the fact that it came 13 seconds after the Sharks had just tied up the game and this would be the eventual game winner? Nasty stuff right there for 400.

1. Tom Kuhnhackl With A Goal Even More Confusing Than How To Pronounce His Last Name

There are 2 things in this world that I have absolutely no idea about. The first thing is how to spell Tom Kuhnhackl’s name correctly the first time around without any help. The second thing is how that sick bastard ended up scoring this goal against Vancouver last night.

Falling down. From his ass. On the backhand. With very little angle to work with at all especially with Markstrom already hugging that pipe. I mean, granted, that’s an absolutely awful goal allowed by Jacob Markstrom. I mean it was truly fucking terrible. But we may never know how that puck managed to squeeze its way in there. It’ll go down as one of the many wonders of the world. And quick sidenote here: I had zero idea that Tom Kuhnhackl was playing for the Islanders this year until this goal happened. I guess it’s true when the say you learn something new every day.