Odell Beckham Jr. is always in the news for something. If it isn’t for being on a boat, then it’s for demanding money, demanding the ball, demanding attention, beating up trash cans, or calling out his quarterback. It’s always something.

Except this time, that something is awesome.

Beckham is buddies with Marquise Goodwin and that young lady, Deja, is Goodwin’s little sister who has cerebral palsy.

“Quise has been like a brother to me, and if you know him, you know he has a very special story. He’s just been through a lot of adversity, and he’s kept fighting, and he’s a guy I’ll be working out in the offseason, trying to get as fast as him,” Beckham said after the game at his locker.

That story has many layers, but it starts with the birth of his sister. According to doctors, Deja wasn’t supposed to live past six months, yet here she is, in a game that wasn’t just any ordinary game. The Giants and Niners will always carry a greater burden for Goodwin, who last year suffered a life-altering loss right before the matchup.

In the early morning hours of last season’s Giants-49ers game, Goodwin’s infant son was delivered stillborn, and after discussing the situation with his wife, Morgan, Goodwin decided he would play in the game.

At the time, Morgan Goodwin told People Magazine there were complications throughout the week leading up to the game. The child, who was named Marquise Jr., was delivered stillborn at 3:52 a.m. on Sunday, Nov. 12.

Later that night, in a 31-21 triumph over the Giants, Goodwin caught an 83-yard touchdown pass and blew a kiss to the sky, dropping to his knees to pray in the end zone, overcome by the moment.

Needless to say, last night’s game was difficult for Goodwin, but luckily his friend, Odell Beckham Jr. was there to make it just a little bit better. 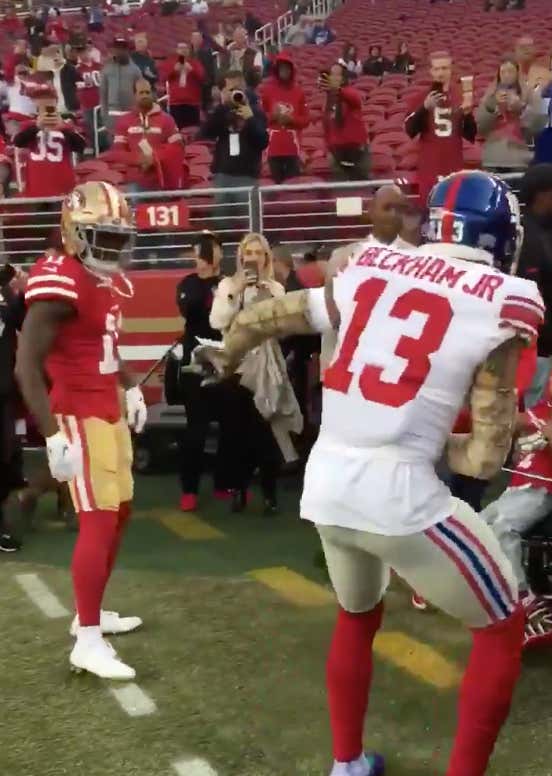 And ever since the UP blog, I’ve been an emotional mess, so thanks to OBJ for showing others kindness and heart.