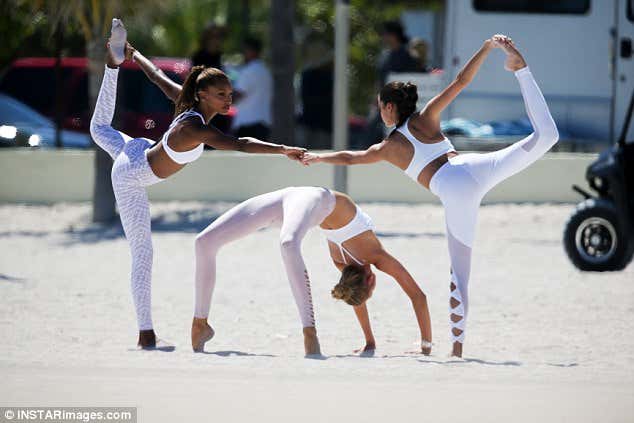 Models Toni Garrn and Zuri Tibby are getting lingerie-ready for the Victoria’s Secret Fashion Show by sweating it out with hot yoga.

The beauties have been seen in Miami for sweat sessions at Maham Yoga.

A source close to the studio told us that 26-year-old Garrn’s hardworking nature has rubbed off on her fellow yogis.

“She’s competitive, and wanted to make sure she was the best in the class and she was,” we’re told. “She inspired other people in the class to push themselves because they saw how hard she was working.”

The confidence she radiates on the runway comes with her to the studio as we’re told the German stunner once said after a session, “I loved the class and I killed it, obviously.”

I didnt wanna let this cat out of the bag but I’ve been known to do a little yoga in my day. I get down on the ground and throw my legs spread in the air and act like a magician but screaming Tadasana at the top of my lungs. It’s a deep stretch.

That’s why I’m issuing you a challenge on this No Nut November. Do you have the courage in your balls to commit to yoga like these Victoria Secret Models? If not, why’d you even click this blog? You knew I was going to issue you a Hot Yoga Challenge. It’s that time of year, after all. Namaste.