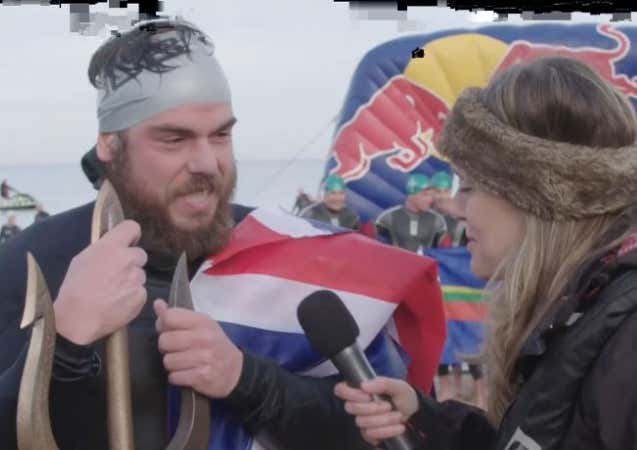 An adventurer from Grantham has become the first person to swim 1,780-miles around Great Britain.

Ross Edgley, 33, was joined by 300 swimmers for the last mile before he arrived in Margate at about 09:00 GMT.

Edgley left the Kent town on 1 June, and has not set foot on land since, swimming for up to 12 hours a day and eating more than 500 bananas.

He has battled strong tides and currents in cold water, braved storms, jellyfish and swimming in late autumn.

The effort has taken its toll on his body, resulting in shoulder pain, wetsuit chafing and his tongue has partially disintegrated from salt water exposure.

Back on dry land, Edgley told the BBC that despite needing to learn to walk again after so long in the water he is still “not quite bored of swimming” and looking for his next challenge.

Supported in his swim by Cornish sailor Matthew Knight from his catamaran Hecate, Edgley revealed that at times the tides helped him to swim at speeds of up to 8.7 knots.

Every now and then I’ll eat a banana. About once or maybe twice a year I’ll think, “hmmm… it’s been about a year since I had a banana. Maybe I’ll eat one.” And then I eat one and feel like I’m gonna puke. Choosing to eat 500 bananas in 150 days is gross. Just gross.

I think people do tasks like these so they can hook up with some ladies.

Ross is probably bellied up to the bar right now. He probably opened up the door to the bar, slide across the floor on his belly because he no longer knows how to walk, and climbed into a chair.

“I’ll have the margarita. On the rocks.”

“Salt or sugar on the rim for ya lad?”

Ross looks around to see if anyone is paying attention….

“Sugar please. I’ve had enough salt in my diet over the last 5 months if you catch my drift.”

“Oh. I’ve been swimming around Great Britain for the last 5 months. I’m the first man to do so. That’s why I’ve only got me sea legs.”

“Check please,” he says disappointedly with a mouth full of banana.