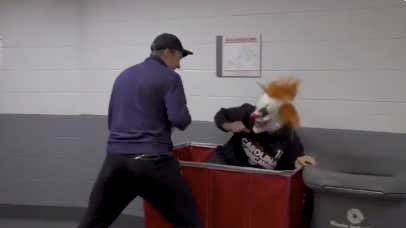 It’s Halloween so you know the Carolina Hurricanes are going to be doing something. They seem to be all over social media now a days. Justin Williams arrived to the rink early yesterday to put on a clown mask and scare some of his Hurricanes’ teammates as they showed up to the rink in the morning.

I’m completely shocked that Williams wasn’t punched in the face here. You creep up on a hockey player in the morning wearing a clown mask there’s about a 90% chance you are getting duffed in the face. Teuvo Teravainen looked pretty damn close to killing him. That would have been some A+ content. Want to create some good social content? Get your guys to start kicking the shit out of each other when they pull pranks on each other.

The culture has completely changed Carolina’s locker room. Was it because I wrote a blog this summer about how Carolina was a dumpster fire and upper management listened and brought in some glue guys? I wouldn’t go that far. But man are things different in Carolina, and it all starts with the Captain, Justin Williams.

Williams is allegedly the ring leader behind the team’s end-of-the game celebrations that they have been doing following wins. Personally, I hate it. I think it’s stupid and makes no sense. I’m also the farthest thing from a competitor so if the boys are buying in and it is actually helping them win games then why the fuck not, keep on doing it.

Overall though, Carolina has been a great story this year. They are having fun, they are doing it differently and most importantly they are winning games.