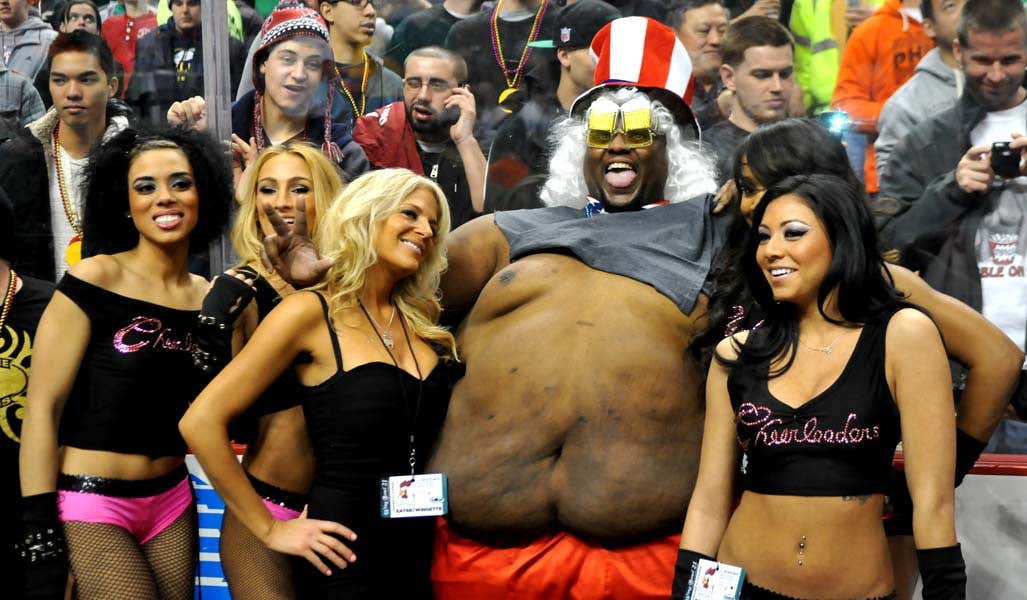 I think we all knew this time was coming eventually. The Wing Bowl was originally created to give the city of Philadelphia something to celebrate on Super Bowl weekend. So many people from outside the city love to look at the Wing Bowl as a way to make fun of Philly and to call us losers and yada yada yada. But what those sons of bitches don’t realize is that the creation of the Wing Bowl in the first place was essentially intended to make fun of ourselves, and a self-proclamation that we were losers. The only reason it started in the first place was because the Eagles weren’t going to be making it to the Super Bowl anytime soon, and it took 11 years of the Wing Bowl’s existence for the Eagles to make it there for the first time since it’s creation. So anybody who isn’t from Philly who used the Wing Bowl as ammunition to make fun of this city and our fans–you’re all the biggest fucking idiots in the world.

But last year was different. When the Philadelphia Eagles won Super Bowl LII, this city changed forever. Obviously teams in this city have won championships before but an Eagles Super Bowl was always what drove this city. And when that finally happened? This mentality in this city went through a complete overhaul. This isn’t the same Philadelphia it was before February 4, 2018. This is a championship city. And if we want to make room for some more championships, well then we need to let a few things from the past go on their way. And unfortunately, the Wing Bowl is one of those things that we must say goodbye to as we turn the page and enter this new chapter of Philly sports.

In a way, saying goodbye to the Wing Bowl is a beautiful thing. We couldn’t have asked for a better way for this to go out. The Eagles won the Super Bowl and Molly Schuyler became the first person to ever eat 500+ wings. 26 years ago this thing started as a way to give Philly sports fans something of our own to celebrate while other cities around the nation got to celebrate winning the Super Bowl. And in the final year of its existence, we saw an Eagles Super Bowl and a world record. It’s the perfect way to go out on top. Don’t cry because it’s over, smile because it happened.

So now what? For 26 years, the Wing Bowl has been the perfect excuse for people in Philadelphia to get blackout drunk by 6:30am on the Friday before the Super Bowl. Personally, I don’t think that tradition should end. The Wing Bowl may be over but the drunken debauchery doesn’t have to go with it. Should we all just show up to the same Wawa on February 1st and get shit faced around the coffee station? Maybe we all just show up to the Rocky Statue with some 40s and get gassed up on the Art Museum steps? We have some time to figure it out so I’m open to suggestions. Either way, this is what I’ll say about the Wing Bowl–

It was foul, it was disgusting, it was filled with degenerates passing out by 7am and people stuffing their faces with hundreds of chicken wings before the stock market even opened up. But it was our foul, disgusting, degenerate’s paradise. This was something that the rest of the world thinks that Philadelphia should be ashamed about, but it’s not. Because as the old saying goes, “No one likes us, we don’t care”. This was a time for the people of Philadelphia to live up to every sort of stereotype that was ever thrown our way, and relish in the opportunity to do so. You drank some beers, you saw some boobs, you had yourself a time. The Wing Bowl served one purpose and that was to make Philly sports fans forget that they had never seen the Eagles win a Super Bowl, at least for a few hours early on a February Friday morning. And that’s exactly what it did. But now we don’t need the Wing Bowl anymore, and we should be happy about saying goodbye. The Wing Bowl didn’t die because the PC police came in and shut it down. It died because a champion was born. With each death, there is new life. It’s a beautiful thing. And at least we’ll always have the memories.