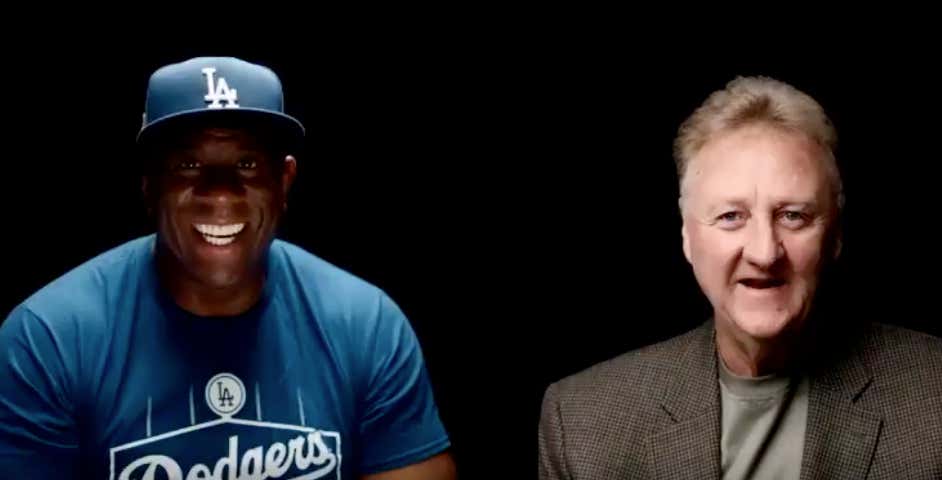 As we all know, the following promo was shown before last night’s Game 5

Naturally, the internet blew their load everywhere talking about how awesome it was that Larry and Magic cut this promo. To me, it felt a little too forced and too corny. I mean Larry’s acting was Oscar worthy, but the whole thing felt weird to me. Am I alone in that thinking? I could be, which is fair, but this didn’t really do it for me. That’s surprising since the Magic/Larry rivalry usually does the trick, but this just felt different. I need more trash talk from Larry. Where was the dig about losing back to back World Series? Couldn’t have thrown a tampering dig in there too or something along those lines? I guess what I’m getting at here was it was too PG rated for me. How come Magic didn’t punch back and talk about 1987 after Larry brought up 1984? I feel like there were so many opportunities to really poke at each other that we simply didn’t get. Now it is impressive that they actually got Larry to do something like this since he hates cameras and hates attention, I just wish he went for the jugular like he would have done when they were players.

I mean I get it, doing some sort of Magic/Larry promo was a no brainer, and frankly I’m surprised it took this long into the series to get it. I just watch that and almost cringe, which is a weird feeling for me. Again, please tell me I’m just being stupid here, but I can’t be the only one who feels this way right? Such an awesome rivalry deserved a promo with real hate and personal digs, not this soft light hearted shit. Like if somehow there’s another Celtics/Lakers Finals, I’m going to need something muuuuuuuuuucccccchhhh better for that. I get it this is baseball and not the true BOS/LA rivalry, but all I see when I watch this was a missed opportunity.

If you’re feeling like shit today and need something to kill time, give this a watch. Still one of the best retirement ceremonies I’ve ever seen