Some things never change and, despite having what seems to be a franchise quarterback, there is still dysfunction in Cleveland.

On one hand, great, we finally have some hope and promise with a good young team that is better than their 2-4-1 record. On the other hand, does it really matter so long as Hue Jackson is still the head coach? (No)

Luckily, the Browns catch a break this week as the dysfunctional roller coaster ride slides into Pittsburgh, a place they haven’t won at in 15 years. Years… 15 years… there have been 30 games since the Browns last won their one-and-only game at Heinz Field. 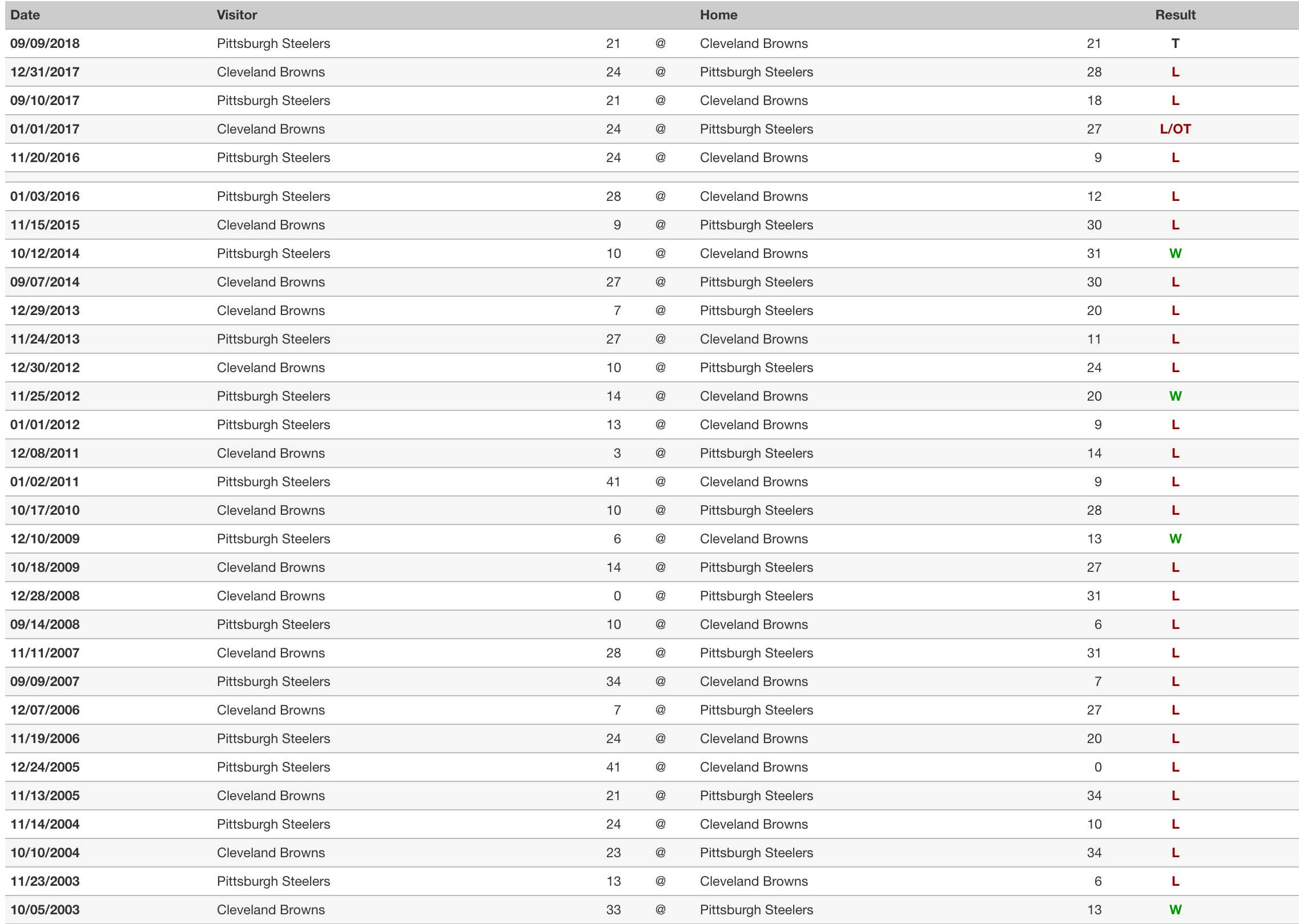 Tim Couch was the last quarterback to go into Pittsburgh and win a game for the Browns. The quarterback for the Steelers was Tommy Maddox. This time around, things will surely be easier against a Steelers team that has been one of the hottest in the NFL as of late.

The coaching issues have been dialed up to 100 following last week’s disastrous game for the staff.

I really don’t know what to expect, but Hue Jackson firing Todd Haley if this is a bad week would be about the dumbest thing that could happen (and that’s saying a lot). Haley has had some questionable moments this season calling plays, but everything starts at the top and this one lands on Hue Jackson. He was 1-31 coming into this season and had the same record as the play caller, there’s no chance he can fix any issues. They need to either fire Hue or just ride it out.

There is some good news for the Browns…

Hey! Great! That makes up for that back-breaking call on a touchdown pass.

The Browns have shot themselves in the foot so many times this season with dumb penalties, that’s why the horrible officiating against them has been even harder to deal with. Hopefully this week they can avoid any absurd calls or no calls…

I’ll keep this short and sweet this week. The Browns are 4-2-1 against the spread this year and have been within one score of every game with the exception of their loss to the Chargers. With the line at +8, I think it’d be wise to lean on the side of the Browns in this one. Neither defense is particularly great and the Browns will likely give up a fair chunk of points, so their offense scores a few times the over should hit.

Quick quiz question: is this the Browns entire roster, or just their in-week injury report? 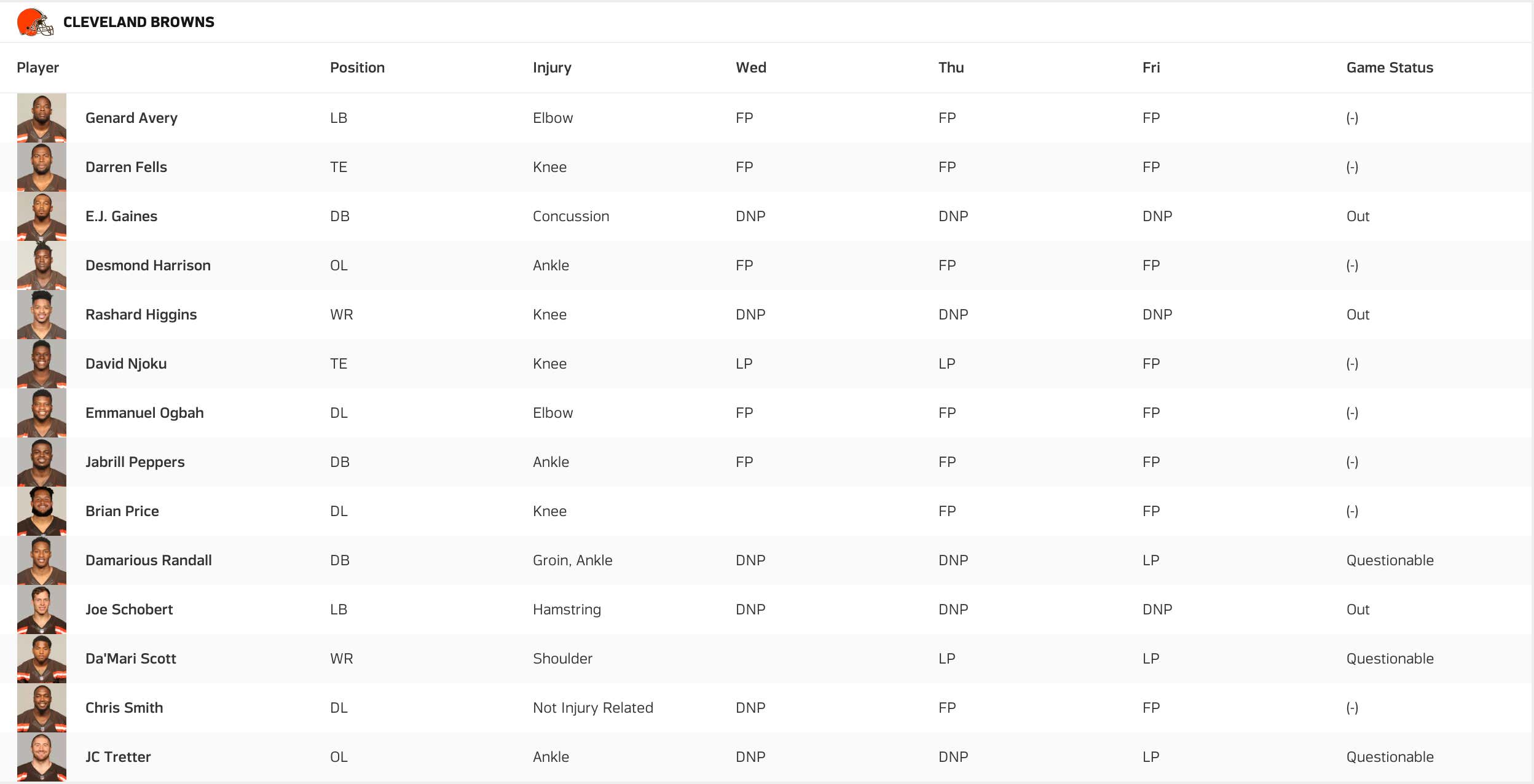 Well, if you guessed injury report, then you’d be correct!

There isn’t much to elaborate on this front as the injuries are the same as last week. The Browns will be without three key players in linebacker Joe Schobert, wide receiver Rashard Higgins (please come back) and cornerback E.J. Gaines. Another cornerback, Terrance Mitchell, is on the injured reserve and has said he will be returning soon.

That’s great news for a Browns secondary that has performed well this year. Getting Mitchell back with Gaines will at least even things out on the defensive side of the football.

For Pittsburgh, the only player of note out for the game will be right tackle Marcus Gilbert. That’s good news for the Browns who got pressure on Big Ben in Week 1 and will have to do the same if they want to have any chance this week.

The Browns lead the all-time series with the Steelers 52-41 when they returned to the NFL in 1999. Fast forward to 2018 where the Steelers lead the series 74-58-1. That’s absolute fucking insanity. The “new” Browns are 6-33-1 against the Steelers. Man, that is so pathetic. The Browns last beat the Steelers in 2014 but came really close against their backups at Heinz Field in each of the last two season’s Week 17s.

So I already used the Browns’ last win over the Steelers for my matchup story in Week 1. That leaves me with nothing but losses for this week. The year before that win, the Browns blew a massive lead in the AFC Wild Card round to the Steelers at Heinz Field. It sucked.

Here we go, Baker Mayfield’s first start against the Pittsburgh Steelers. This is the type of game that can grow the legend of a player. The last time this offense faced the Steelers, they had the benefit of a plus-five (+5!!!) turnover margin, only to squander it and have the game end in a tie. That simply cannot happen this week. 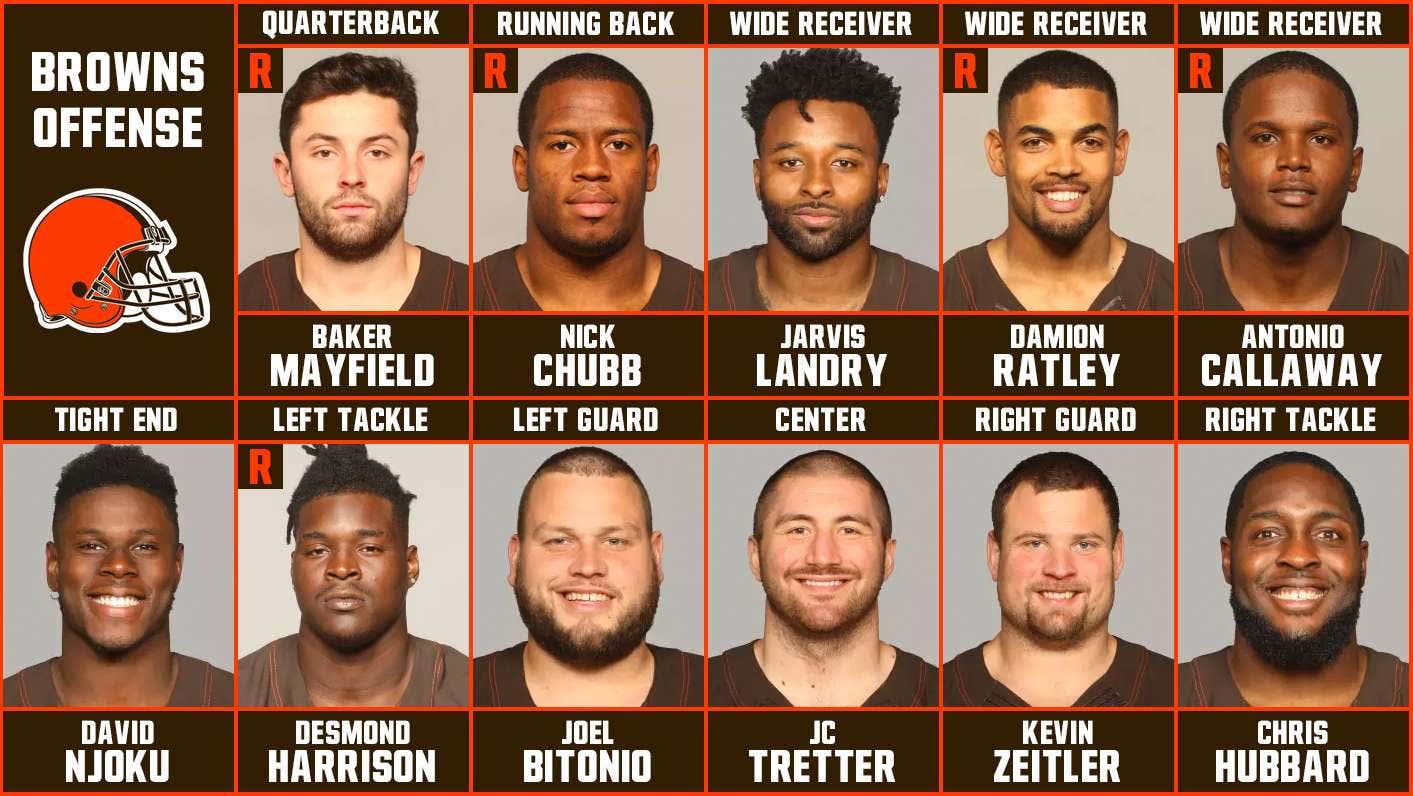 Baker had a really great second half last week, going 13-for-18 with 151 yards, two touchdowns, 11.6 yards per completion and no interceptions. It even netted him rookie of the week.

I can be as negative about the coaching staff as I want, but this Browns team has promise with some good young players.

There is plenty for Baker to work on, that is bluntly obvious, but he has been better than critics are alluding to. Sorry, but he hasn’t been “just okay.”

He’s making great throws and sticking in tough amidst a situation of injured receivers, some bad line play at times and, of course, a mess with the coaching staff. Does he need to protect the football? Yes. Are there moments he needs to get rid of the football? Yes. But Baker has been solid and, for some reason, isn’t get the “he’s just a rookie” benefit of the doubt.

Part of the issue for Baker right now is the combination of slow developing plays, especially on 3rd down, and an immediately-collapsed pocket thanks to his offensive tackles.

You have to give your quarterback a better chance to succeed when you factor in all of the circumstances he has to deal with. Hopefully, the play calls are more like they were for much of the second half last week.

When he isn’t immediately sacked, Baker has been one of the better quarterbacks under pressure this season. As any NFL fan knows, the Browns should expect a ton of pressure from the Steelers today. Tyrod Taylor did a pretty poor job with this in Week 1…

He has been good so far and managed to handle the Baltimore Ravens’ defense, but this matchup and how Baker navigates the blitz might be the biggest key to the game for the offense.

Nick Chubb was really solid last week and got better the longer the game went on.

The Buccaneers have one of the better rush defenses in the NFL, so it was an encouraging first start for the rookie (even though if you listened to Tiki Barber call the game you’d have thought that the Carlos Hyde trade was the worst move in NFL history). Carlos Hyde was not very good in Week 1, with 22 attempts and 2.8 yards per carry. Chubb needs to have a good game to keep some of the pressure off of Baker.

Getting the ball to your best wide receiver is good? Who knew!

Last week, the offense focused on Jarvis Landry and it paid off. He caught 10 passes for 97 yards and one touchdown and had his best game as a Cleveland Brown. With a depleted wide receiving corp and young guys throughout the lineup, the Browns need to rely on Landry again this week, he’s too good to not receive the most targets on the team.

I called the defense overrated going into last week and was proved somewhat wrong. They had their bad moments thanks to lazy effort and Gregg Williams ridiculous blitz schemes, but they churned out a fantastic second half and forced four turnovers (even though that bullshit soft zone is a big reason why the Buccaneers kicked the game-winning field goal). 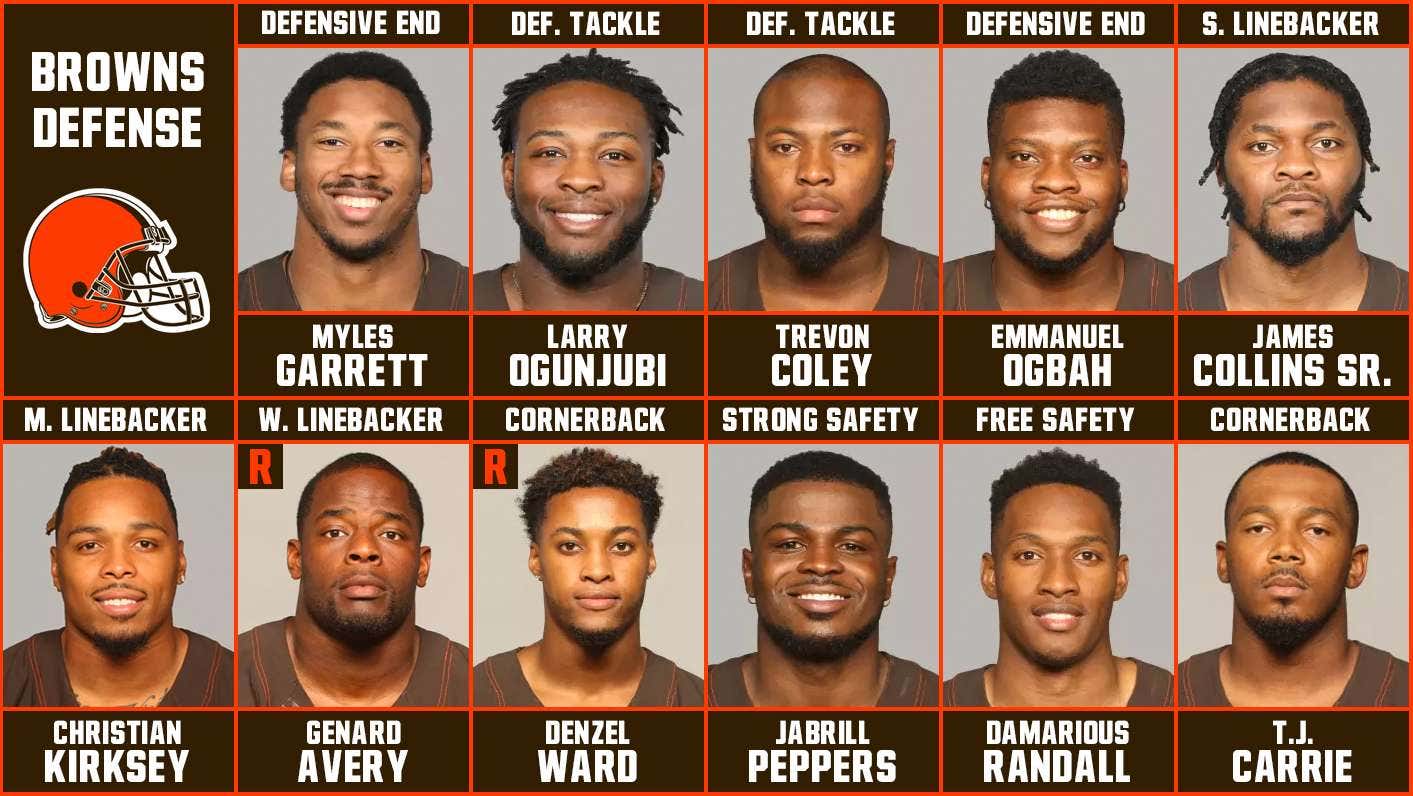 Myles Garrett had a monster game in Week 1, probably one of the best efforts against Big Ben in Browns history.

He sacked and hit Big Ben twice, had three tackles for loss, forced a turnover and had one pass deflection. Garrett was a huge reason why the Browns stuck neck-and-neck with the Steelers in Week 1 and they need him to do it again.

His 135 yards on 31 carries and two touchdowns made Le’Veon Bell’s absence irrelevant for both the Steelers and the Browns. Conner has been great all season and I don’t think the Browns have much of a chance if he rushes the football like that again today.

Christian Kirksey had a standout game at the linebacker position last week, recovering a fumble, interception Jameis and nearly forcing a safety.

This was great to see for the Browns’ leader on defense. He needs more games like this, because the Browns are the worst tackling team in the NFL. Every opponent they’ve faced has had success running the football, especially out on the edges and with end-arounds and jet sweeps.

Damarious Randall had a really solid afternoon last week, switching positions with Brien Boddy-Calhoun to help accommodate for the injuries in the secondary. The Browns gave up a ton of yards, but their play in the second half kept the team in the game.

The switching of positions was a great move from Gregg Williams, who was also able to move T.J. Carrie into a better fit on the defense.

Carrie had a pretty terrible season going into last week as a replacement for E.J. Gaines, so credit to Gregg Williams for finding a way to make the best out of a tough situation. Loom how humble I am, I am critical yet complimentary when I have to be!

I can write a million words about the Browns defense vs. Pittsburgh and talk about matchups, but, like always it will come down to now letting Big Ben treat them like his little brother.

My nightmares typically consist of watching Big Ben nearly go down for a sack, only to break free and pick up a big gain for the Steelers.

Gregg Williams’ zone blitz scheme typically gets torched by tight ends and that’s terrifying for us Browns fans to think about heading into this game.

Vance McDonald and Jesse James will be tough for the Browns to stop today. Once Big Ben opens it up with his tight ends, you’re fucked as a defense against the likes of Antonio Browns and JuJu Smith-Schuster. In Week 1, James had a solid game and destroyed the Browns a few times last season. Meanwhile, Vance McDonald hasn’t had much success against the Browns, but it’d be very fitting for that to change this week.

The Steelers will be paying tribute to the victims and families of the horrific synagogue shooting yesterday in Pittsburgh. There will be a moment of silence before the game with both teams on the field.

It will be an emotional moment and day following such a disgusting act.

There’s always a chance the Steelers just run the Browns right out of Steel City, but I think Baker is too tough and will be able to keep this game close. I am not sure the Browns will ever really have a chance to win this afternoon, but I expect them to put up a fight.
PREDICTION: Steelers defeat the Browns, 28-24