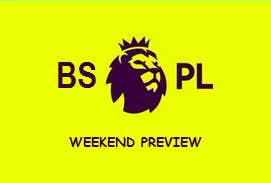 I’m holding off on hitting publish for a little while because Georgian and Floridian everyman and everywoman are bludgeoning one another at the moment, so apologies on the delay for anybody who has been itching for your weekly helping of weekend soccer preview gloriousness, but I will try to make it up for you by serving up a plethora of moneymaking**** predictions.

Before we get to the good stuff, though, there are a few quick housekeeping things that I am obligated to tell you about. I have mentioned for a few weeks now the fact that I have been working on some new things to coincide (and supplement) the much anticipated [by me] launch of Sam’s Army podcast… and I don’t blame you if you have started to lose faith in my ability to deliver on this pledge, but I am ever so happy to actually be able to do so starting this weekend with…

1) First-Ever Instagram Takeover – Decision Day in MLS is upon us and the biggest storyline is the race for the Supporters Shield between Atlanta Utd (69 points) and NY Red Bulls (68 points)… so what better way to get balls deep in the pageantry than by following along as 2017 MLS Rookie of the Year Julian Gressel takes control of Sam’s Army Instagram account ALL DAY SATURDAY and gives us a behind the scenes look as Atlanta travels to and prepares for Sunday’s all-important fixture at Toronto FC.

In addition to tomorrow’s IG takeover, also subscribe to Sam’s Army podcast (links below) to listen to an interview with Julian that will be featured on the episode that drops on Tuesday morning.

2) La Classique Game Watch on Sunday – Barstool is teaming up with PSG (aka Paris St. Germain – pretty big club in France for those who haven’t heard of them [nbd]) for a game-watch they are hosting in NYC this weekend for their big ass derby against Marseille known as “Le Classique”… so anybody wanting to watch some high quality footie should come on down to Legend’s (at 6th/33rd) on Sunday – kickoff is 4pm ET, and I have absolutely no idea how crowded the place is going to be but Mikey, Zah and I will be around taking it all in.

Thanks a lot, fam. Now on to the good stuff… 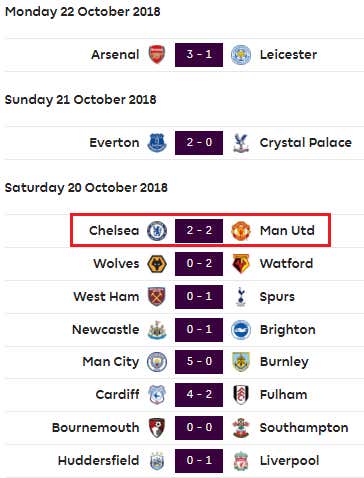 – Interesting game between Chelsea and United. The Blues dominated possession throughout and took an early lead on a set piece goal but Anthony Martial (almost singlehandedly) carried the Red Devils to a highly unexpected but much needed win. Alas, it wasn’t to be as another breakdown on a set piece in the 96th minute led to a Ross Barkley equalizer after which all hell broke loose on the sideline.

– Arsenal are kinda good again. Not saying I fixed them… but I definitely kinda fixed them. Godamit I am dumb sometimes.

– Champions League bed-wetting aside, Spurs have become the most predictable team in the league:

– Most unexpected result of the weekend was Watford going on the road and bossing the hell out of Wolves. Could turn out to be a big six-pointer at the end of the season if these two clubs are fighting it out for a Europe League spot.

– Bournemouth versus Southampton happened. Not that we have acknowledged it let us never speak of it again. 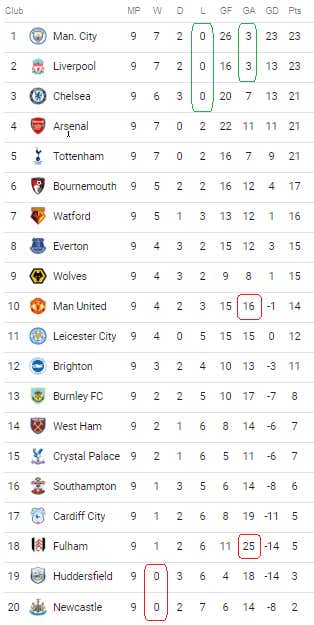 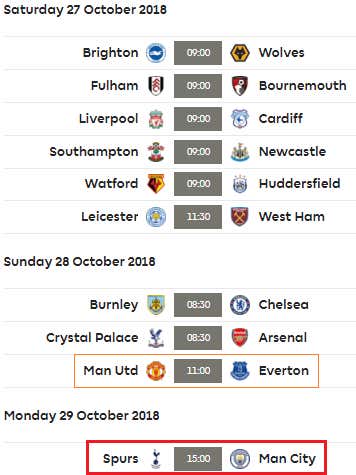 Game of the weekend is not actually being played on the weekend but we’ll start with it anyway at Wembley on Monday. Spurs got their asses handed to them both times out against Big Bad City last season… and the sad fact is that Spurs were a better team then than they are now with all sorts of injuries and Harry playing at roughly 85% fitness. I think it’s fair to assume that Christian Eriksen is healthy and ready to go, which is extremely important as was evident against PSV in Champions League this midweek, and if Dele is back that would be HUGE.

Not much to say about City. They are happy, healthy and just went on the road and took a dump on Shakhtar on Wednesday.

Might City be a little tired? Could Spurs snag a point? Mehhhhhhhhhhhh, maybe? Perhaps the fact they know they aren’t as good as last season at they were last season will work in their favor since they won’t try to play with City, which was fun for neutrals but is what got Spurs in big trouble last season. The big problem though is that they haven’t proven they can put in a complete performance for 90+ minutes without making one or more MASSIVE mistakes, which against City will absolutely kill you. Let’s just say I’m not optimistic for my boys. City to win 1-0.

This one has youuuuuuuuuuuuge Europa League ramifications, clearly. Everton have found some form lately but they have only come up against one opponent that you could argue is any good (Arsenal) and they got spanked. Tough to feel great about putting any faith in United at this point but at least Martial is playing well… so perhaps Romelu Lukaku will stop playing ridiculously unnecessary cross-field passes and Marcus Rashford will actually show up. It does sound like a bit of a pipedream but I’m going with the Red Devils walking away and some additional breathing space for our lord and savior jesus content Jozay Mourinho. United to win 3-1.

• FULHAM v BOURNEMOUTH – MORTAL LOCK PREDICTION OF THE WEEKEND: GOALS, GOALS AND MORE GOALS IN THIS ONE… I hate over/under bets in soccer because an early goal or red card means everything gets thrown out the window but sometimes you gotta live a little so I’m calling the over in this my favorite bet of the weekend. Why? Well, mostly thanks to Fulham’s turrrrrrrible defense but also because the Cherries can score plenty in their own right (especially with Scottish sparkplug Ryan Fraser back in the mix). Wouldn’t be surprised if Ryan Sessegnon is pushed back on defense this weekend to try and shore things up a bit but not sure that alone will make a huge difference. I’ll go out on a limb and say Fulham find a way to keep up… gimme a 2-2 draw.

• BURNLEY vs CHELSEA – Gotta throw a little upset alert on this one. The Blues are coming off a Spursday night game and, while they were able to rest Hazard they still played a very strong XI, they are headed to Turf Moor where (in years past anyway) opponents have had a tough time. Sarri’s vaunted zero-striker set had difficulties against a defensive-minded team last weekend and I wouldn’t be surprised if it happened again. 1-1 draw.

• PALACE vs ARSENAL – 11 straight wins for the Gunners who are coming off the perhaps most impressive of all. Doesn’t even matter than Sporting haven’t looked that good this season… walking out of Portugal in a European competition with a clean sheet is legit. So do they find a way to shit the bed against a Palace team that has done absolutely nothing for months? Probably not. Arsenal to win 3-0.

• LIVERPOOL vs CARDIFF – Ummmmmmm, yeah, at Anfield… Cardiff coming off their first win of the season so probably still reveling in that… this smells like an ass whooping… 4-0 win for Liverpool.

• WATFORD vs HUDDERSFIELD – Watford is a tough team to pin down this season having beaten Spurs, gotten waxed by Bournemouth then spanked Wolves. Huddersfield on the other hand have been pretty consistent… but unfortunately that’s not a terribly good thing. I wouldn’t put YOUR money on this game but if I’m gonna make a call I’ll say Watford to win 2-1.

• LESTER vs WEST HAM – Two teams that seem destined for mid-table mediocrity and luxurious springs spent planning summer vacations rather than caring too much one way or the other about how they perform each weekend… which is sort of a compliment for the Hammies given how they began the season. Some sort of ugly 1-1 draw just feels right for these two teams at the moment.

• BRIGHTON vs WOLVES – Feels like a bounce back game for Wolves after their dead fish performance last weekend. Brighton are off successive 1-0 wins and are no pushover, especially at home (just ask Jozay), but that Portuguese midfield is probably gonna be too much. Wolves to win 2-0.

• SOUTHAMPTON vs NEWCASTLE – Is this it? Is this the game that Newcastle get their first dub of the season??? I went back and forth on this one about 50 times before deciding “probably not” because Southampton are probably a bit better and at home… but it’s only a matter of time until Toon falls back asswards into a win. Saints have scored a grand total of six goals this season, which is no better than their feckless opponent, so I’m taking the much better odds in what feels a lot like a toss-up. Newcastle to win 1-0.

SPAIN – EL CLASICO TIME! Real Madrid come in struggling mightily while Barcelona come in without Messi. It’s at the Camp Nou so while I want to give Madrid some credit and say they keep it close since everybody always says “you can throw out the records” in games like this… who knows, really hope Madrid is up for it because it could be a ton of fun on Sunday (10:15am CT).

ITALY – Big finish to the extended weekend starting on Sunday with a goal-fest as Napoli host Roma (2:30pm CT) followed on Monday by a high quality defensive battle between Lazio and Inter (2:30pm CT).

GERMANY – Dortmund are suddenly one of the hottest teams in the world and are must-watch at the moment, so be sure to check out their game against Hertha Berlin on Saturday (8:30am CT).

FRANCE – LE CLASSIQUE! PSG vs Marseille (3pm CT)… come say hi if you are in New Yawk on Sunday.

MLS – In addition to Atlanta (at Toronto) and Red Bulls (vs Orlando) in the race to the Supporters Shield, there are still playoff spots in the east and west to decide with Columbus (vs Minnesota) and LA Galaxy (vs Houston), respectively, sitting in the driver’s seat. All games played simultaneously at 3:30pm CT on Sunday.

So there we have it, boys and girls. Have a spectacular weekend. See you bright and early on the twitter machine tomorrow morning (and/or possibly on Sunday if you are out and about).