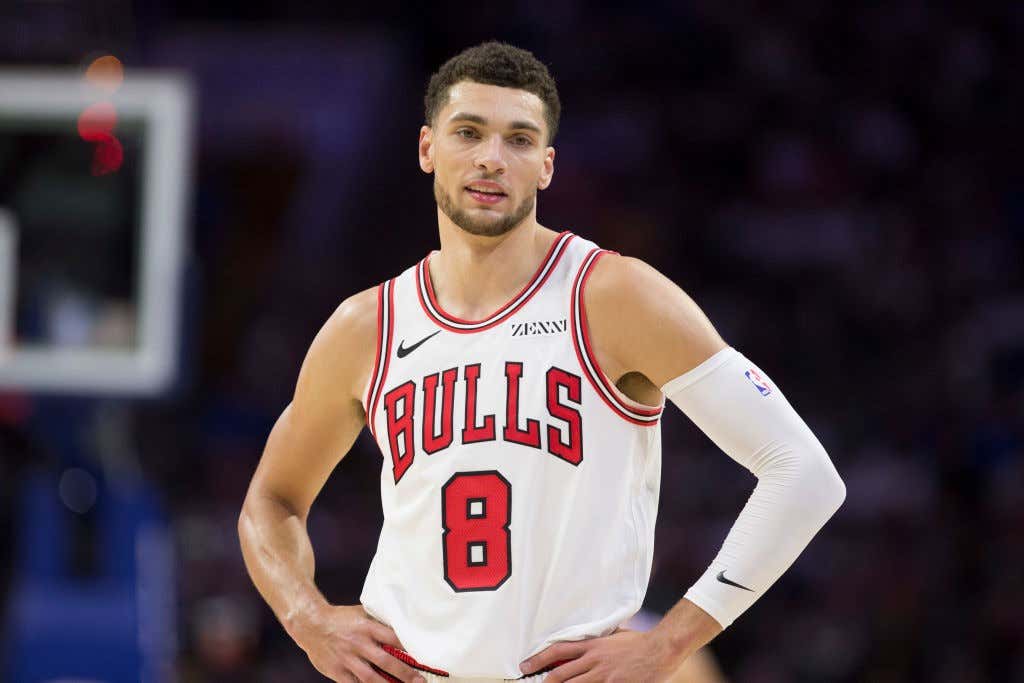 Remember when this news broke this past summer?

I think it caught all of us by surprise. I mean that’s a lot of money for a guy who we really didn’t know if he was fully back from his ACL injury. You see LaVine returned to action on January 13th last year, and played 24 games before being shut down for good just two months later on March 15th. Over that time he showed flashes of being his old self, averaged 16.7/3.9/3.0 which was pretty much the ballpark he was in while still playing in MIN before his injury. The only problem was his efficiency wasn’t quite there as he had only 38/34% splits. In my opinion he was always the wild card part of the Jimmy Butler deal. If he truly developed into being a legit offensive stud, and showed that he could be healthy, then the Bulls really came away ahead in that deal, no matter how good Butler ended up being. People forget this kid is just 23 years old and was coming off a career year before tearing his ACL 47 games into the 2016-17 season.

So when Shams told us the Kings were preparing that offer sheet, we laughed. Just the Kings doing Kings things per usual right? No chance the Bulls would match such an insane number for a guy who they only had a limited look at right? Everyone has a price where you need to determine if it’s worth the risk, and Bulls wasted no time in matching. This told us they believed in LaVine not only as a player, but that he was healthy and poised to have a great 2018-19 season. Well, to say they were right would be a gigantic understatement. Here are the facts:

It’s safe to say there have been a ton of great starts to this NBA season. You think of names like Curry, Giannis, AD, Mirotic, Randle, Blake, etc. Well LaVine is currently 3rd in the NBA in scoring and an impressive 110 Ortg. Everything we saw before he got hurt, we’re seeing now, only way more efficient. Take last night for example when he tore the Hornets up for 32/4/5 on 10-22 shooting

Or his 34 against the Mavs from last week

Or his 33 against the Pistons

Or his 30 against the Sixers

As you can see, he looks so comfortable as the #1 option for this team I don’t even think Bulls fans truly expected this. I won’t speak for them so I’ll just say his offensive development sure has surprised me. Should we have seen it coming though? Guess who he was working out with this summer

2. Part of his success is due to insane isolation play

LaVine runs isolation around 17.1% of his possessions and averages an insane 1.23 points per iso possession on 54.5% shooting. He ranks in the 82nd percentile with this type of set, which is a DRASTIC improvement from his 50th percentile in his previous breakout year in 2016. You can see in that video, his crossover looks incredible and his first step is probably better than it’s ever been. Should you expect this to come down to earth a little? Maybe, but nobody has shown any real ability to limit a healthy LaVine from living at the rim whenever he wants.

The Bulls run P&R ball handler plays on 20.2% of their possessions. This is good for the 6th most in the league and a noticeable increase from their 17.1% last year. Nobody has benefitted more from that strategy change than LaVine, who really dominates in this set as well. He runs it 44.7% of his possessions and averages an even crazier 1.35 points per possession on 57.7% splits. He ranks in the 97th percentile with this type of play and in my opinion it’s because defenses have no idea how to guard him just yet. The fact that he can get you in the midrange makes defenses play tighter, and then he just goes right by you and dunks on your face. Considering he was in the 64th percentile back in 2016 on this type of play, you can get an idea of what a difference this makes for him as your primary scorer.

What are the two most common ways we see #1 options score? Through isolation and P&R, two areas that LaVine is playing the best basketball of his career in.

4. Another sign he’s figuring it out is his ability to get to the line

All good scorers know that the easiest way to pad your stats is to get to the line. LaVine is averaging a career best 9.0 FTA a night which is more than double his previous career high, and he’s getting to the line at a FTr of .468, which is pretty absurd. His previous best was last season in his short stint, where it was around .300. Given that he’s a career 82% FT shooter, this is important.

I could understand the skepticism after the first game or so when we saw him play well, mostly because he did this at times during his 24 games last year. But now that he’s backed it up essentially every single time he’s played this season combined with how he’s scoring offensively, there is every reason to truly buy into what we’ve gotten to start this year. I know this has to be painful for MIN to see, given THIS was the player they always wanted LaVine to be (I confirmed this with my Timberwolves fans college pals) and seeing as how Baby Dirk also looked legit as a rookie and Jimmy Butler is all but gone, things are rough for them.

Now don’t get me wrong. There are still a ton of areas that LaVine needs to get better at. His defense for the most part is still pretty terrible, but again, he’s just 23 years old. If I were a Bulls fan, since they are in the middle of a rebuild, I would care way more about how LaVine looks on the offensive end and if he can truly be that #1 scoring option than I would about his defense. Let other people worry about that for the time being. In a season that has had great starts from a ton of guys, I think I’ve enjoyed LaVine’s the most. He is just such an exciting offensive player when healthy, and even if he comes crashing back down to earth and ends up being like a 20/4/4 type player, as long as his efficiency stays somewhat where it is, I think Bulls fans take that 10 times outta 10.

It just goes to show, maybe all of us on the internet should wait a little bit before we kill a deal that happens over the summer. Sometimes a ridiculous breakout year is on deck, and all of the sudden $20M a year is a steal.