I hate shit like this. Banksy did something similar when he sold a bunch of his prints on the corner of Central Park at an unmarked stand. A couple lucky people bought a few pieces for a hundred bucks and then found out later that they were worth tens of thousands. That self-important criminal is constantly trying to increase the value of his work through publicity stunts, and all it does is give me FOMO.

Union LA had a quiet, unremarkable tent at a flea market where they were selling their new Jordan 1 collaboration. Who knows how many of these people were real vs. plants. Given the internet and its duplicity, I’d venture to guess that a lot of this was staged. Regardless, I LOVE the black toe version. The stitching and the tongue definitely borrow from Virgil Abloh’s recent deconstructed Nike crossovers, and I’m a huge fan of those. I also really like the cream sole and laces. Anything that differs from your typical AJ1 colors, as long as its not outrageous, is cool by me. I suspect these will be worth a lot on the secondary market too, given the popularity of the store.

Anyway, if this IS real, I’ll bet those hype beasts are rather unhappy. These are the same guys who will camp out for days in front of a store for a pair of sneakers. This guy in particular: 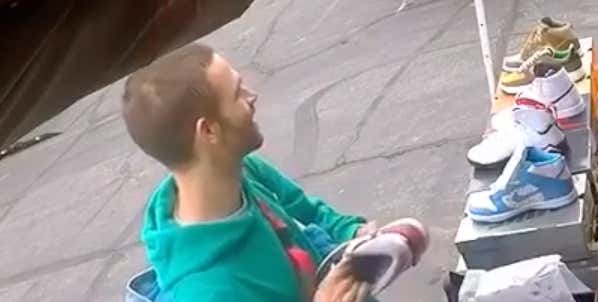 He was referencing how he’s been a fan of the store for a while, “we’ve got OG Union, these can’t be real” (this guy feels the most like a plant to me). I want it to be real, and I want him to know he passed on a highly-coveted release, because I hate these people. But I have my doubts.

PS- speaking of FOMO, Smitty announced that he was going out to buy lottery tickets and asked if anyone wanted to “get in.” This is the biggest asshole move in an office environment because it forces you to hand that guy money simply to buy yourself peace of mind. You know you guys have no chance of winning, but in the insanely unlikely event that your coworkers win without you, you have to kill yourself or at least quit your job. Handing Smitty $20 was a life-insurance policy for myself.