Last week I wrote about this vaguely human-shaped pile of Brachiosaurus shit who took time out of protesting something or other in Portland to berate a woman for the crime of behaving herself. It started out with him calling her a “fucking snarky little bitch” who should “shut the fuck up,” before taunting her to “try something bitch.”

So when for some bizarre reason he brought up the topic of whether or not her husband hits her and she calmly and patiently explained said her husband was NYPD who died during 9/11, it escalated into him telling this saintly woman her heroic late husband “should fucking rot in the grave.” Because that, apparently, is how you empower women to break the glass ceiling and resist being mansplained by the patriarchy, I guess.

The fun part was when he got confronted by counter protesters. Briefly stood his ground and told them to “bring it on.” And I say “briefly” because it was exactly 20 seconds between the moment he did this: 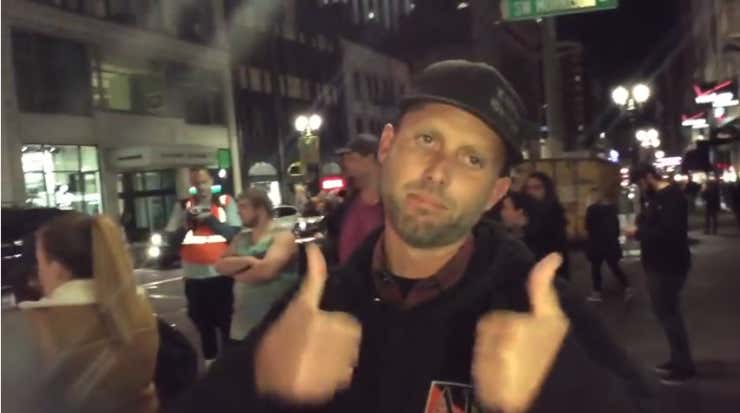 To the moment he dropped the tough guy persona he saves for middle aged widows, assumed the submissive stance, tucked his cowardly tail between his hind legs and ran off (see the 1:45 mark but it’s all gold, I assure you):

So it’s with joy in my heart that I bring you this update:

Steve Wilson was caught on camera cursing at the woman and telling her that her husband deserved to ‘rot in the grave’ at the Patriot Prayer protest in Portland, Oregon, on October 13. …

On Tuesday, Self Enhancement Inc, a non-profit organization supporting African-American youths, confirmed it was Wilson by announcing he had been fired over it.

Thank you, Self Enhancement, Inc, for doing the Lord’s work on this one. I don’t know much about this organization either, but just by this one action I’m ready to believe they are exactly the kind of people we need in a crazy time. When we have such a schism in this country that privileged, punchable-faced snots like Steve Wilson not only think it’s OK to harangue the widows of men who gave their lives saving thousands of others but fucking fashionable, something they can brag about to their neck-tatted friends over lattes later on, we need more people like the ones at Self Enhancement, standing up and saying that shit won’t fly here and we have higher standards.

As far as Steve Wilson he’s presumably looking for a job now. But this clip is everywhere, so lots of luck with that. The good news is this will give him more free time. On 9/11, 23 officers of the NYPD and 37 of the Port Authority and New Jersey PD were killed. Along with 343 FDNY. So there are plenty of grieving widows he still hasn’t threatened and harassed. Now at least he’ll be able to.