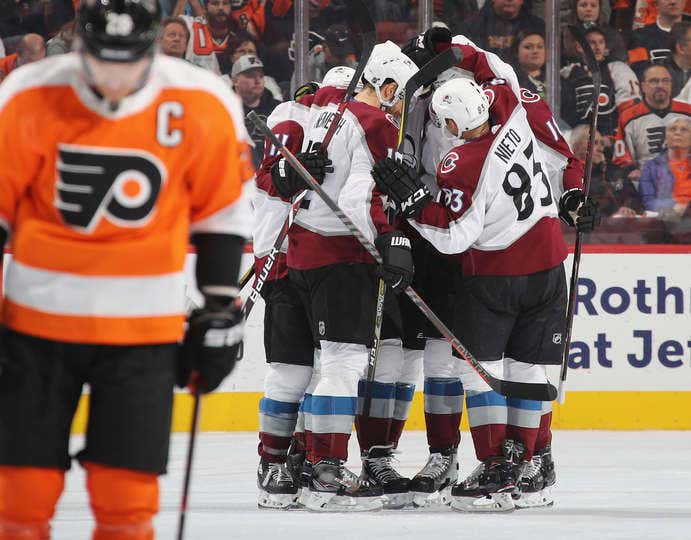 There is something fundamentally flawed about this 2018-19 Philadelphia Flyers team. To their very core, there is something wrong with this team. It’s easy to point out that the goaltending situation is a disaster. It’s easy to point out that there are a couple defensemen who probably shouldn’t be on an NHL roster. Obviously the Flyers are dealing with a few injuries already. Those are all clear problems, but that’s not what is wrong with this team. Those are all things that you can fix by bringing in new guys throughout the next year or so. There is something deeper that is broken with this team. Something that causes them to never seem prepared for the start of a game. Something that causes them to play scared for the majority of the game and constantly seem like they’re “playing not to lose” until it’s too late. It’s an energy thing. It’s an effort thing. It’s starting to seem like a culture thing. The Flyers don’t have an identity at the moment. We’re just about 10 games in to the season and the only words I can really use to describe the Flyers would be inconsistent and a lack of effort. And to me, that seems like a leadership flaw.

The Flyers have a skilled roster. They have a Hart candidate in Claude Giroux. They have a Selke candidate in Sean Couturier. They have potential Norris candidates in Shayne Gostisbehere and Ivan Provorov. This isn’t a team that should look so goddamn lost at times, yet they are. But that’s what happens when your team doesn’t have an identity. And that blame should go to the head coach and to the captain. At this point, “Flyers hockey” is just a really easy team to play against. You might not always beat them but it’s not like they’re going to make life miserable for you in the process. Fixing that flaw in the Flyers’ identity is a much more difficult fix than just a few roster holes on the backend. I know it’s only October 23 and there’s still plenty of time for the Flyers to figure themselves out. But would you ever refer to a good team as “inconsistent” and “lacking effort at times”? No, no you would not. So maybe the Flyers just aren’t a very good hockey team at the moment.

Anyhoo, let’s talk about some of that game last night.

Ian Laperriere’s Penalty Kill Is Now 30th In The League

68.8%. That’s what the Flyers’ penalty kill is operating at right now. There is only one team that is worse right now on the PK and that’s Florida who is at 66.7%. In the Flyers’ 9 games so far this season, they have given up at least one powerplay goal in 6 of the games. They have given up 10 powerplay goals total so far on the season. The only teams who haven’t scored against the Flyers’ PK so far is Vegas twice and then Columbus. Vegas has the worst powerplay in the league and they are operating at under 10% on the season. Columbus is only at 13.8%. So against shitty powerplays, the Flyers’ penalty killers are having a decent time. But against any somewhat competent powerplay? The Flyers are going to lose that special teams battle.

Listen. If Ron Hextall wants to be a stubborn son of a bitch and refuse to admit that Hakstol isn’t the right guy for the job, then whatever. But at the very least, you can’t justify Ian Laperriere still having a job. I know that he’s not the guy who is out there killing the penalties and plenty of the blame has to be passed along to the players. But the Flyers are an undisciplined team. They make too many mental errors that send them to the box. A team this undisciplined who takes this many penalties can’t afford to have the 30th ranked PK in the league. It’s suicide. So if you don’t want to fire Hakstol just yet, I still think that’s a mistake but somebody has to go soon. And if the PK stays under 70% then it might have to be Lappy.

This is what really bothers me about this team right now. When you’re a team who doesn’t have a goalie who can bail you out of tough situations and your team is typically chasing the lead, you can’t afford to make so many mental errors. Whether it’s not having enough guys out on the ice. Making an ill-advised pass through the middle of the defensive zone. Guys just skating into one another because the spacing is terrible out there. Nobody seems to be on the same page with each other. Nothing about this Flyers team is crisp. Nothing that they do really says to me that this team is mentally prepared every time they touch the ice. And I don’t know how you fix that. And the thing that sucks the most about this is that most teams can afford to make a few mental errors here and there because they can rely on their goalie to bail them out of a shitty situation if necessary. But when you have Brian Elliott in the net and Claude Giroux just whiffs on a shot off a faceoff?

Well you just can’t count on getting that save. So all of these little, unforced mistakes the Flyers keep making are adding up and they’re ending up in the back of the net. And a goal like that Landeskog goal last night are completely demoralizing for a team attempting to get back into that game. That goal made it 3-0 Colorado. The Flyers were only down by 2 and they were getting plenty of opportunities throughout the game to get on the board. But one mistake by Claude leads to Robert Hagg tripping over his own feet which leads to Landeskog dunking on Brian Elliott. When a goal like that gets scored against you, it takes all of the gas out of the tank and the game could have just ended right there. Granted, the Flyers scored shortly after but it’s too little, too late at that point. So unforced mental mistakes are resulting in some backbreaking goals against the Flyers, and it all comes down to the team seeming to be unprepared to play on a nightly basis.

No. Not completely bad. If there’s one player who came out of last night almost completely clean, it was Travis Sanheim. He was doing a little bit of everything last night, especially offensively. He had a few really nice plays on the powerplay and then there was the Nolan Patrick goal. Great work by both former WHLers on this play as they made eye contact, Nolan knew to get himself to the net and made a sick deflection through his own legs. But for as nice as the deflection was, the pass/shot from Sanheim was just as perfect. Perfect speed, perfect placement. Just a real confident play. So there weren’t many positives to take out of last night’s game but Travis Sanheim was certainly one of them. And even before the goal, I thought Nolan Patrick was playing a pretty solid game as well. Pretty much what you want to see out of your 2C. And you know what? Quick shoutout to the 4th line as well. I thought Lehtera and Weise were both buzzing around pretty well last night and spent a decent chunk of time in the offensive zone. They didn’t do anything great but they also seemed like they were ready to play a full 60 minutes. So Sanheim, Patrick, and the 4th line. Those are the guys who shouldn’t have to feel shame today. The rest of the team, however? They’re just getting tough to watch.

Like the headline says, the Philadelphia Flyers are not a good hockey team right now. But there’s still time. For better or for worse, I’m still feeling somewhat confident that this team will figure it out, turn it around and be a playoff team. I don’t know why I still think this but I just do. Despite all their flaws, I know that there is a good hockey team in there. But they are going to need to turn things around pretty quick here because even though we’re only ~10 games into the season, the Metro looks like it’s going to be a gauntlet again this year especially with Carolina turning it on. Washington, Pittsburgh, New Jersey, Columbus and Carolina are all going to be an issue moving forward. The longer it takes for the Flyers to come up with any sort of identity, the bigger the gap between them and those other 5 teams become. So I don’t know what it’s going to take for the team to find that identity, but if they’re still playing inconsistent hockey by the time December rolls around? When then it’s time to actually panic. I’m giving this team one more month to figure it out before it’s time to blow things up. I guess we just have to buckle up and see how November goes.

P.S. – Firing a coach in December always seems to have the best impact. Flyers fired John Stevens in December 2009, they were in the 2010 Stanley Cup Final. The Penguins fired Mike Johnston in December 2015, they won the 2016 Stanley Cup. Just a thought in case Ron Hextall is reading this blog.