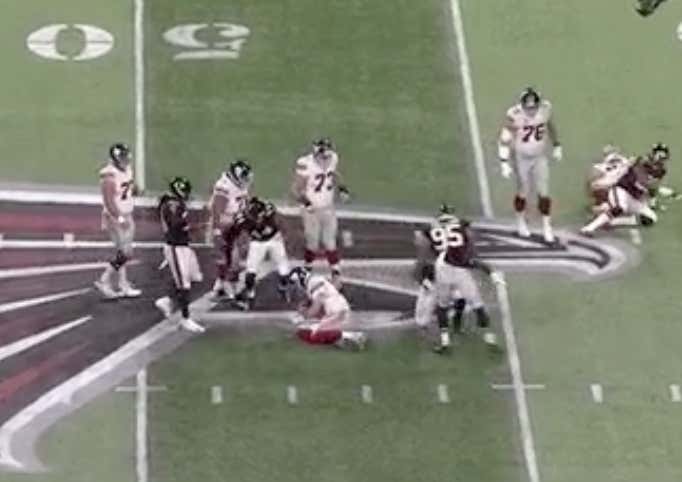 Years from now, historians will look back at the 2018 New York Giants and wonder how the fuck every offensive possession was more painful to watch than the Scott’s Tots episode of The Office. From Saquon to Odell to Shepard to Engram. The Giants offense has the engine of a Ferrari yet put out the performance of Portnoy’s Nantucket Bronco. I don’t know if I will ever understand how a team with those players that had 11 days to prepare for the banged up, struggling Falcons defense could muster 12 points in the first 58 minutes without committing any turnovers. And you know shit is bad when your team can’t come back against the Falcons late and rip every Atlanta sports fan’s heart out during a game on prime time.

There has been a chicken or the egg debate about whether the offensive line or Eli has been the problem with the offense. But what if it’s…BOTH?!?

I could include a bunch of videos and gifs of Eli getting snuffed out in the first half like it was a game of backyard football with a 1 Mississippi rush time. But even when Eli got protection, he missed receivers, which was either his fault or the receiver breaking off his route. Eli did throw for 399 yards, but they were as quiet as 400 yards can be. But it was passes like this that decided the game.

Pat Shurmur was saying the same thing that every Giants fan on the planet was.

– In a fitting twist, tonight’s fake Odell controversy was him choosing to go to the locker room to pee instead of pissing his pants only a few days after saying he doesn’t like drinking water.

– Speaking of Booger McFarland, I think it’s safe to say that the Boogermobile is not a hit with people that pay a shitload of money for good seats at a game.

“Booger get out of the freakin’ way!” was probably the Booger-related highlight of the night. This was my first time ever paying attention to the Monday Night Football broadcast and holy shit was that rough. Booger used the phrase “Matt Ryan is an elite quarterback” so many times I thought he was either a Madden announcer or trolling PFT. I don’t need crazy bells and whistles with my NFL broadcast. But that was the most boring, cliche-riddled announcing I have heard in my life. I haven’t spoken Spanish since I took it in 10th grade, but I think watching ESPN2 and the Spanish announcing team would be significantly better and caliente than the dogshit they are peddling on ESPN.

– I’ll admit that I had no fucking idea why the Giants were going for 2 when they were down 8 with 4 minutes left. But apparently that is what the analytics sheets say to do?

However do those analytics sheets take into effect that the Giants had the ball in the red zone multiple times and have been one of the most disappointing offenses in the entire NFL? But please don’t compare the Giants offense to the Eagles or Rams. I know Eli had Odell on the first conversion, but THAT’S THE PROBLEM WITH THIS TEAM. THEY DON’T FUCKING EXECUTE.

Okay, I’m sorry, I got mad. It’s late and I’m getting cranky.

– Jason Witten explaining the reason the Giants went for two is because if they had gotten it, they would have had a chance to win the game was something. I too know how math works. Happy he’ll be on our TVs for the foreseeable future.

– Running 2 QB sneaks with Eli from the 1 with no timeouts at the end of the game was an interesting strategy to say the least. It’s moments like this that you remember Pat Shurmur is a part of the Andy Reid coaching tree and you want to hang a noose from said tree for yourself.

– In the end, both of these points were moot since the defense came up short after the 2 point attempt by allowing the Falcons to drive down the field and kick a 56 yard field goal because that’s just what the Giants do now. Give up backbreaking, dickbreaking long field goals to lose the game. And Big Blue couldn’t get the onside kick back after the 2nd touchdown either.

– When push comes to shove, who really cares? This season is an outright disaster just like last season. I fear what type of circus stories that will pop up out of the blue from the players, the coaches, and ownership. Just give me a quarterback that will be in the upcoming draft to believe in, because I am #done believing this team will figure things out on the offensive side of the ball.

Cue the Jimmy G 2.0 highlights because I have a baby awake at 12:30 that I have to tend to. Fuck my life. And fuck this Giants team.