Last night the ZBT squad attended The Headstrong Project‘s annual gala & as I’ve written about before they do amazing work for veterans.

An auction at the event raised a lot of money to provide cost-free, stigma-free mental healthcare to hundreds of vets in the coming year.

Despite my best efforts I did not have sexual relations with fellow attendee & total smokebro Jake Gyllenhaal.

I got a nice dress & a spray tan, I got a new face caked on over my regular face, I brushed & straightened my hair, used a teeth whitening kit and I even wrote a small speech that I was hoping to get a shot at (even though I knew Chaps would be speaking on our behalf). The plan was to make him laugh so he’d be able to start looking past my glaring flaws, then I’d slide in with some commonalities (you know, since we’re both in media) & then to close it out – see if he wanted to do some tequila shots. 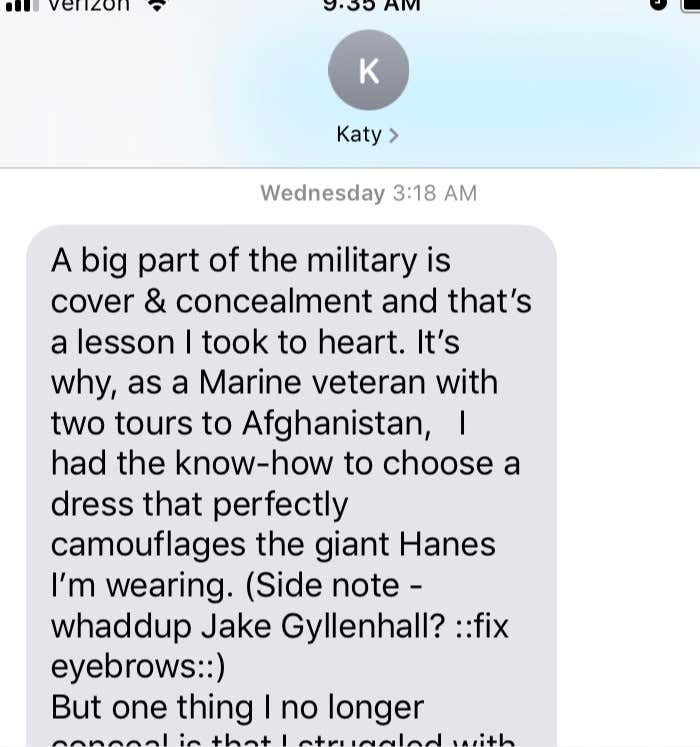 It was all for naught. I didn’t get to speak my piece on stage (though Chaps did an amazing job) & Jake was so swarmed by other people that I didn’t have a chance to make my fool-proof moves.

Jake, I’m sure you’re a long-time Stoolie so if you’re reading this hit me up. No pressure, just two Jarheads getting coffee (and maybe a little bit of the ‘ol ::wiggles super painted on eyebrows that wouldn’t come off in the shower last night::).

Eh, I give up. Probably won’t ever win that fight. Speaking of – on this week’s episode of ZeroBlog30 we have Randy Couture who tells us about his time with 101st Airborne’s Screaming Eagles & who I wanted to challenge to a thumb wrestle or something but then chickened out when I saw him in person & realized he could snap my hand off by accident.

We also have Joe Quinn, Army veteran & Executive Director of The Headstrong Project. He’s got a pretty incredible story & it’s a great way to kick off your Friday. Check it out!