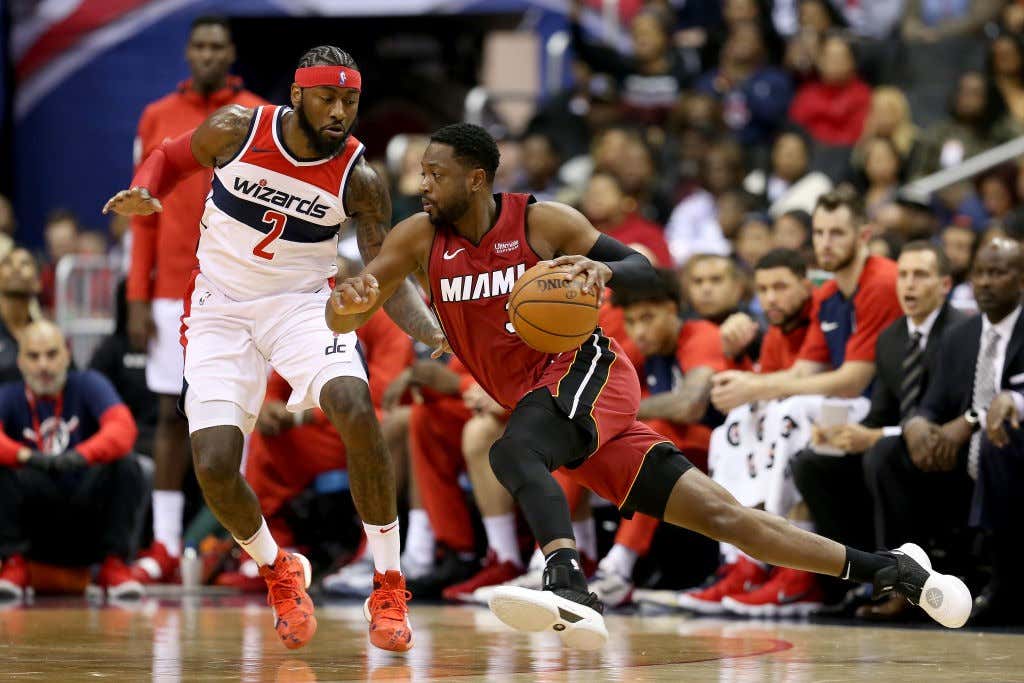 Happy Friday everybody and welcome to another edition of Last Night In The NBA where we catch you up on everything that went down from the night before in the Association. With most of the world’s attention on baseball last night, you may have missed some of the action with the NBAs three games last night, and I’m here to tell you that you missed some quality stuff. We had game winners, career moments, even some late night drama. It’s everything you could want on a random Thursday night in October. So before you even start to think about getting into anything at work today, let me tell you about what happened.

Don’t let this score fool you, the way this game started, it was a battle. When you factor in the TNT Bulls making an appearance that made sense, and they came out and were the best team in basketball for those first 12 minutes. I’m talking a 41 point explosion with both Zach LaVine and Bobby Portis on another planet. I think they missed like 1 combined shot during that time and the TNT Bulls had the city of Chicago thinking they were very, very back

If this is how Portis is going to be playing, maybe the Bulls are going to regret not signing him to an early extension and allowing him to his RFA. He played like a man possessed last night. Between these two they accounted for 50 of the team’s 108, and they were really the only bright spot for the starting unit.

This was also our first look at Jabari Parker on this team, and I would say he was as advertised in his 25 minutes off the bench. I think Bulls fans will take 15/5 on a consistent basis from him, and he didn’t shoot it all that poorly at 7-16

Unfortunately, the problems came in the second and third quarter when the Bulls couldn’t break 20 points. After 41 in the first they scored a combined 35 in the next two, and not only did that let PHI back in the game, that brutal 37-18 third quarter is why this score looks so bad. Wendel Carter Jr got the start and threw up 8/3/3 on 4-10 shooting so there’s room for improvement there, but this season really isn’t about wins for CHI so I wouldn’t stress it.

Now for PHI, they needed to win this game. After how they looked in Boston, a nice easy opponent is just what the doctor ordered. As you expect, their two best players in Simmons and Embiid were goddamn monsters. Embiid with 30/12 and Simmons his first triple double of the year

When these two are on, good luck. But obviously, the story here is Markelle Fultz. He made the first three pointer of his career and looked good doing it, and while his FT form is still all kinds of jacked, it was awesome to see him play well and have a great moment. I’m rooting for him like I’m a goddamn Sixer fan because I want this team to be good. Sure it was a little weird when Sixers fans gave him a standing ovation when he was 1-6, but whatever, they are just trying to support their guy and I can get down with that

I’m hoping his yips are behind him now that he actually made a three, and he only gets better from here.

Stop me if you’ve heard this before. The Wizards were playing great until the fourth quarter where they were obviously tired, and they collapsed losing in brutal fashion at the hands of Kelly Olynyk. I feel like we’ve seen that movie a million times before. John Wall played 36 minutes and you could tell. Outside of him and Beal no Wizards starter really did all that much, they combined for 46 of the 112

I will say, one encouraging sign was that the Wizards did actually get some bench production. Jeff Green of all people led the way with 17 points, but they also had two other guys with 9. Defense is always going to be the thing with this team, as giving up 113 at home is a problem, but right under that is the importance of bench scoring for this team, so maybe that won’t be an issue and they can actually rest their stars.

For MIA, always nice to steal one on the road against a team I imagine they will be fighting all year for playoff positioning. You saw why maybe Pat Riley was reluctant to give up Josh Richardson in that Butler deal as he was the best played on the floor with his 28/4/5

But let’s be honest, the story here was the Olynyk game winner. Not sure how you’re not boxing out there if you’re WSH, but that’s a mistake that will kill you every single time. It’s perfect that it was Olynyk to who got it, the guy just knows how to give it to this Wizards team. He is going to haunt this franchise for years to come, and that’s simply really weird. Not many teams have a Kelly Olynyk problem but WSH definitely does.

You had to know there was no way the Blazers were going to lose this game. Not on the first opportunity to honor Paul Allen. But, if you were smart enough to stay up for this whole thing, you got the best game of the night in my opinion. Back and forth blows from the opening whistle to right down the stretch when it was Dame time and he closed the door.

In what was probably the most shocking development of the night, the Blazers got an insane performance from Nik Stauskas out of nowhere. The kid could not miss, and showed us all why three point shooting is so important in today’s NBA

As a team the Blazers made nearly twice as many threes as the Lakers, and they had their best scoring quarter (35) when it mattered most in the final frame. Unable to really pull away at any other point in the game, each of the previous quarters were either decided by 3 points or less. Obviously defense is still a huge issue, but this was a very POR type game. High scoring and fast paced, and then when it’s crunch time they turn to Dame and he closes it out. A dangerous formula for sure, but it’s who they are.

Now for LAL, it was weird to see LeBron play in a game that matters for them, but like you expect he was his same old dominant self

You’re not going to get him to try on defense in early October, but everything else about his performance was pretty standard LeBron. I’m also man enough to admit watching Rajon Rondo play well was not an enjoyable experience for me

How did the young guns look? Ok I guess. Lonzo and Kuzma combined for just 22 points, Brandon Ingram had a solid 16/4 on 7-15, and Josh Hart was probably the best one with his 20 points on 8-12 shooting off the bench

I still don’t really know what to make of this team, because right off the bat we saw their lack of outside shooting sort of hurt them, but things are so new it’d be silly to form an opinion just yet. All I know is LeBron is going to pretty much do exactly what he did in CLE and that’s save this team. When he is on the floor they sort of rule, but the second he steps off, it’s a bit of a disaster. Makes you think what he’s going to bring in when he gets tired of this come like January.

And that’s it! You’re now all caught up on everything that went down last night in the NBA. We’re back tonight with 9 more games so it should once again be an awesome night of basketball. As always, go live your life tonight and just make sure to check back tomorrow morning so I can bring you up to speed on what you missed.