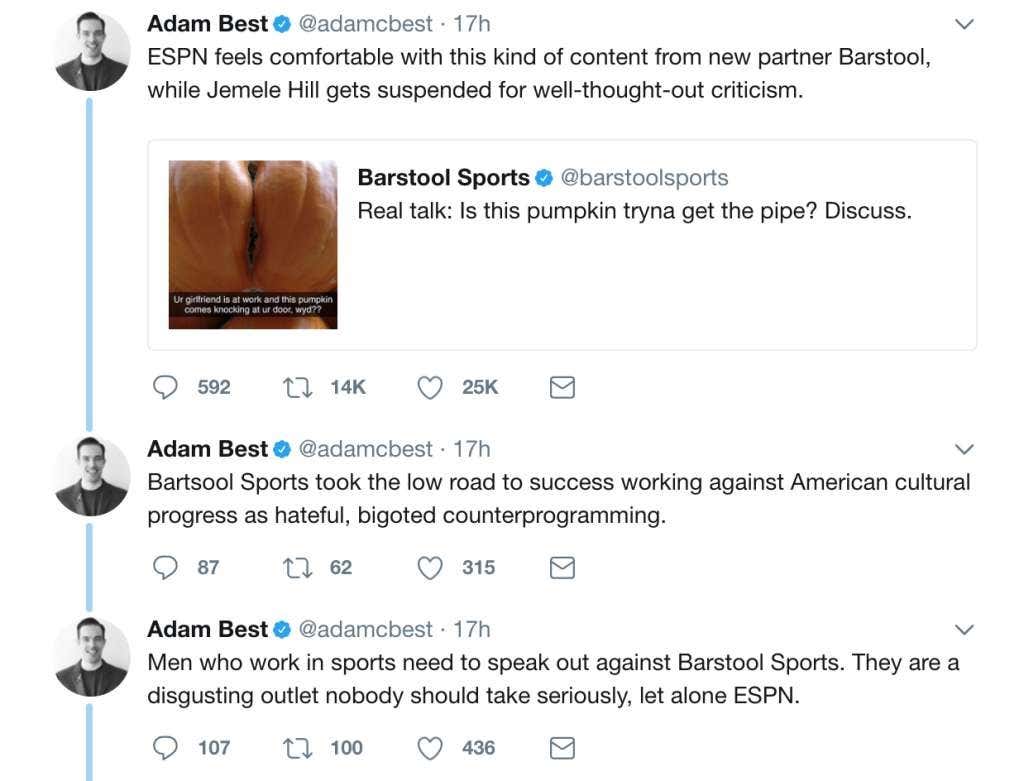 October 17, 2017 was supposed to be known for one thing and one thing only, the launch of Barstool Van Talk on ESPN 2. Another momentous day for the PMT boys, and Barstool as a whole. And then something else happened- Adam C Best decided he had to get involved. He had to climb up on his horse and white knight for the internet. But oddly enough he was white knighting…for a pumpkin.

Never forget that this dude decided to come after Barstool Sports because Chaps wanted to fuck a pumpkin. So he did his thing about how we are bigots and this, that, and the other, as many have done before.

But then my good personal friend Mitch sent this Tweet and called me, saying hey, you might want to look into this: 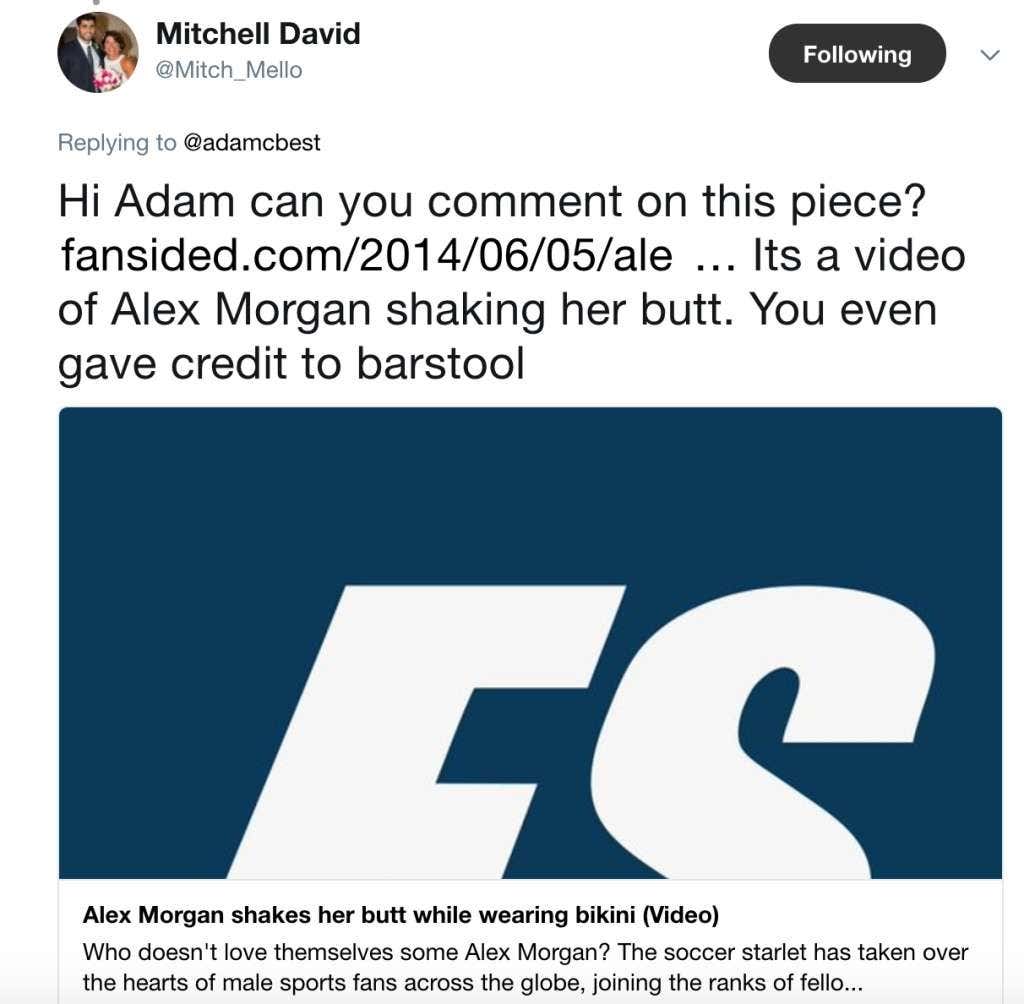 Adam C Best, the founder of FanSided, posting Alex Morgan shaking her butt? No chance that could be real. And thankfully, Adam let us know it was one in a million and very, very against company policy. 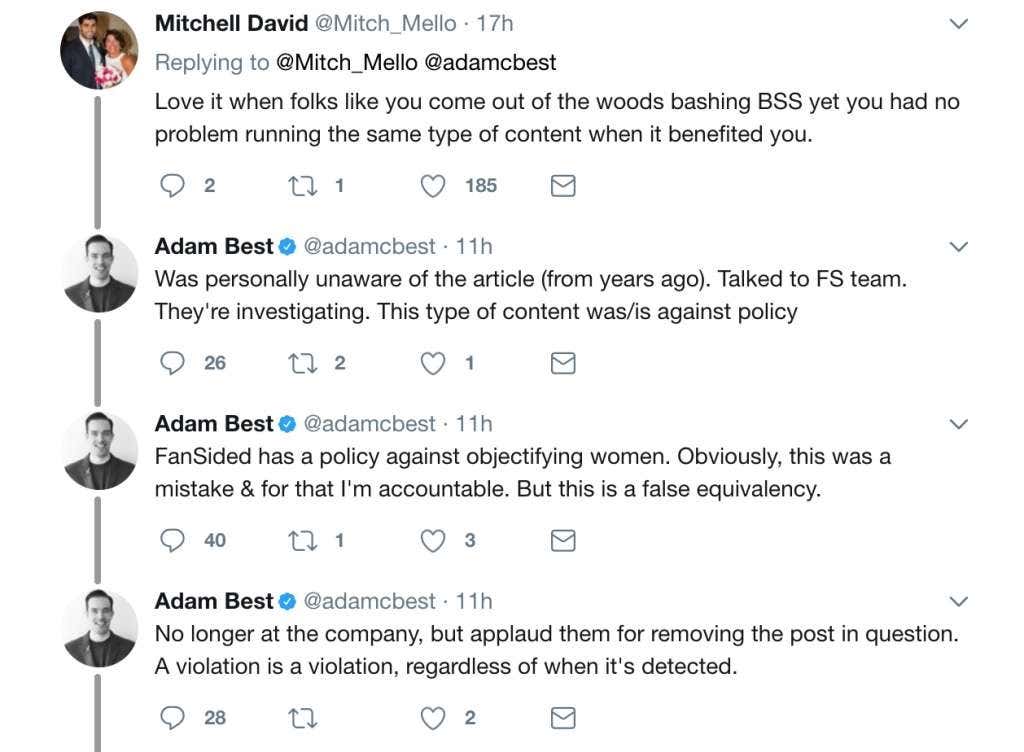 And that was that.

Actually very funny that he wrote “Talked to FS team. They’re investigating”. Like that one Alex Morgan video slipped through the cracks and they were launching an investigation. Didn’t realize how funny it was until now that he said that.

So then my brain started itching. As a blogger, when you get itchy brain, you can’t describe it. You just know there’s something more to the story. I had also just recently seen Spotlight and feeling inspired. So I started digging…and well, you know what happened next- TONS of misogynistic, victim shaming, woman objectifying tweets and posts from Mr. Adam C Best himself!

And he went after dear Doris Burke

And many, many others.

And so I wrote a blog about it all, and this is how I ended it:

So what did we all learn? A few things:

1) The Internet is undefeated

2) We all have sent some tweets, blogged some blogs, said some things that we wish we could have back

3) Don’t pretend to be something you’re not, you will get exposed and it will be bad

4) Seriously, stop shaming victims of sexual assault based on their looks

6) Doris Burke is a saint, keep your name off her lips

7) If you’re a scumbag misogynistic asshole, don’t be

8) All we want to do is make people laugh, it’s really not that hard of a concept

9) The waitress is not into you, she doesn’t care you bought a 50 dollar bottle of Cab Sav

10) Don’t come at my company, my job, or my coworkers. We’ve worked too hard to let some weasel try to bring us down with his faux agenda. I haven’t slept in 4 years, and Adam Best or anyone else isn’t going to try and hurt my future or the future of anyone I work with (besides YP) without a fight.

And a year later and many others trying to bring us down since, it’s all still true. I’m not saying I’m perfect, and that’s the point, I don’t pretend to be. I just want to blog smut, sports, and funny jokes. It was never about Adam C Best’s tweets, it was about the hypocrisy. He was on the internet when it was the wild west, and then he lied and claimed he was so much better than it. No pal, you aren’t.

Now a year later, sometimes I’ll feel bad for how it went down, but he still seems like a huge douche, so I stop feeling bad.

So happy 1 year to ACB. Thanks for showing the internet that being a hypocritical, white knighting loser doesn’t pay off. All because of a pumpkin. And yes, I’d fuck that pumpkin.

Full blog from last year with other tweets here