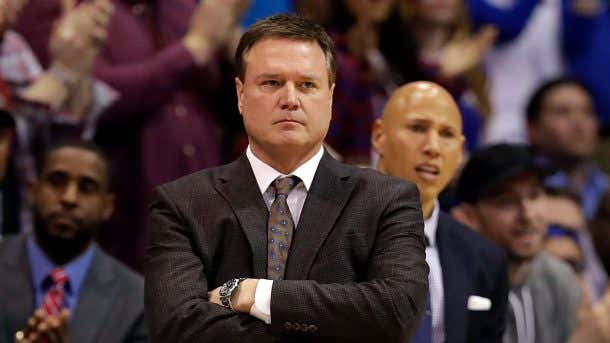 Alright, so a whole lot of stuff came out today. So similar to the past blogs, I’m going to break this up by school and what came out today. Credit to Dan Wetzel, who has done an awesome job of putting everything that has happened in court into tweets. I don’t think they’d let me sit in court, so it’s nice to have some others there.

Let’s get into the most important thing today. Context matters:

We’ll get into everything. But, I wanted to put this tweet first. Remember, we don’t know every single detail leading up to the texts or what the context is, that’s important to remember. But, at the same time there are takeaways from everything.

So, I tweeted out last week that Kansas seemed to be the one program that has looked the worst during this whole trial. Today didn’t help. In fact this contradicts a whole lot about what was said by TJ Gassnola the first day he was on the stand. If you remember, Gassnola said that Bill Self and the Kansas staff had no idea that Adidas was using money to help recruits. Well, this conversation says otherwise. Kurtis Townsend was an assistant for Kansas and it’s pretty clear as to what Zion Williamson is asking for here. Which brings up the next thing – Zion Williamson’s name. He’s the most famous recruit out of high school in quite some time. Not the best – but most famous. But, here we are with his name and allegedly directly asking for compensation. I’m not sure what the means for his eligibility as he should be safe still considering there’s no proof that he received anything. Also, the key here is that this wasn’t allowed to go into evidence and the NCAA won’t ever be able to find anything else more out. But, this is big on Kansas. This just isn’t ideal for them and we’ll see what happens with the NCAA. But this implies that at least Townsend had an idea as to what was going on.

Now, this is something that’s fairly big. LSU’s head coach Will Wade has brought in a massive recruiting class. Next year he’s trying to do the same. But, now he’s apparently on tape talking to Christian Dawkins about a pay for play situation. Obviously not letting this go into evidence is huge for LSU and Wade. We don’t know all the context as Wetzel says, but there is the idea that Dawkins heard Wade say if you send Balsa to him then you’ll get paid. Detail is going to be important here. Either way, I fully expect the NCAA to try and investigate LSU.

So here comes Michigan State indirectly. What’s important here is that Dawkins is trying to push Bowen to Michigan State and it seems like his dad is too. Now, was anything being offered? No one has any idea because it was denied evidence. But, what we do know is everywhere else seemed to be dealing some sort of money for Bowen and you have two people trying to push him there. What’s also important is what Wetzel says. If Bowen just goes to Michigan State, we may never know about all of this and Louisville still has a title banner and Rick Pitino is likely still theh ead coach. The butterfly effect from there is very real and very interesting.

All in all this was big news, but even bigger is the fact that it wasn’t allowed into evidence. That’s going to be key against any NCAA sanctions – potentially. Remember, the NCAA can use things said in court and outside things like this instead of doing their own investigation. Well, what happens when you don’t have all the details? That’s what’s going to be unique about this from an NCAA sanctions standpoint. The NCAA doesn’t hold the power to make people talk and people won’t talk to them. They are going to rely on what’s said here and right now it’s a lot of possible news but not all the details. I still don’t think this is a great week for Kansas though. What happens with them is right now what I’ll be tracking the most.