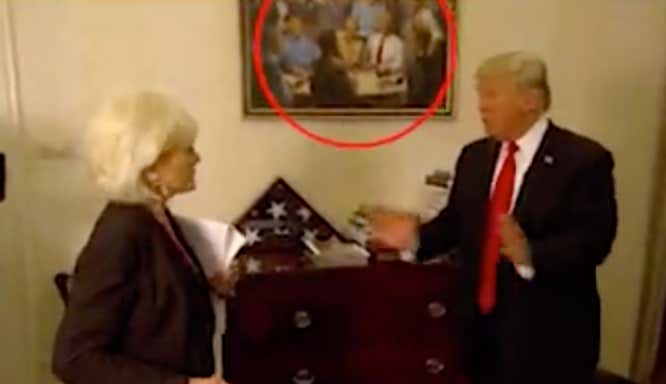 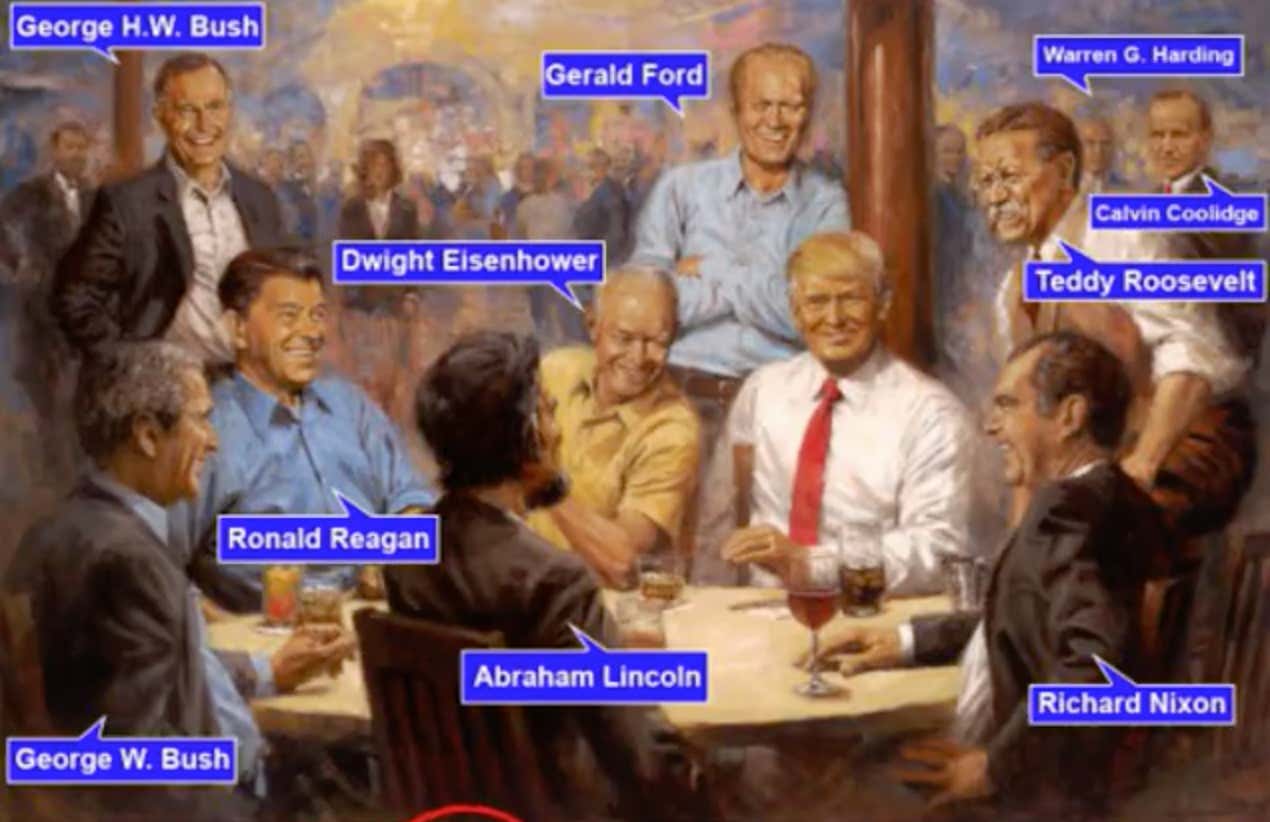 DM – Eagle-eyed viewers of the President’s 60 Minute interview noticed a bizarre painting of Donald Trump seated at a table among some of the most notable Republican presidents in history, including Abraham Lincoln. People took to Twitter to comment on the strange White House decor hanging prominently outside of the Oval Office, with some likening the arrangement of the presidents to the kitschy Americana paintings of ‘Dogs Playing Poker’. Some assumed the piece was commissioned by Trump himself, considering his thinned down visage and his positioning smack-center among influential Republicans. In the piece he is seated across from Lincoln, between Presidents Dwight D. Eisenhower and Richard Nixon, with Teddy Roosevelt and Gerald Ford standing behind him. On the far left of the table is Ronald Reagan, with George W. Bush seated next to him and George H.W. Bush standing.

Love Trump or hate him, this is awesome. Why wouldn’t he have this painting in the White House for everyone to see? Why wouldn’t anyone? A total Tommy Smokes move, but one that adults could actually appreciate. And what a painting it is. Teddy Roosevelt asserting his Bull Moose for all to see. The Gipper looking as handsome as ever. George W. Bush, the President Americans said they’d most like to have a beer with even though he doesn’t even drink, cracking jokes left and right. Ike HAMMERING whiskey regaling the crew with war stories. Lincoln not doing a single thing because he’s motherfucking Lincoln. Just an awesome scene through and through. My only question is who decided who made the cut? What, Donald, Rutherford B. Hayes not good enough to enjoy your company? McKinnley being soft enough to get assassinated doesn’t warrant a pity beer? I get how Herbert Hoover, the GOP President during The Great Depression, isn’t featured, but some would say Richard Nixon isn’t exactly someone you want sitting directly to your left, either. They don’t call him Tricky Dick because his penis performs magic. I think. Also, I love how they didn’t cut it off with just those around the table and stuck Warren G. Harding in the way back. Get caught up in the Teabot Dome Scandal and be widely regarded as one of the worst Presidents of all-time means you gotta earn your way to a place at the table.

But for real, it’s just a really cool painting. Nothing more, nothing less. In fact, illustrating someone smack dab in the middle of a bunch of their idols would be the greatest gift ever. If someone wants to paint me chilling out in the Phillies clubhouse and crushing beers with the likes of Utley, Rollins, Schmidt, Rhys, Kruk, Dutch, and motherfucking Bowa ready blow his top, please, go ahead. No, seriously. I would pay solid money for that. Or just keep it simple and Nobilify Me, like Conner Barwin once did with the Eagles LB crew. Everybody wants to be king.

Or just Kramer it and call it a day. Such a loathsome and offensive brute, yet I can’t look away…