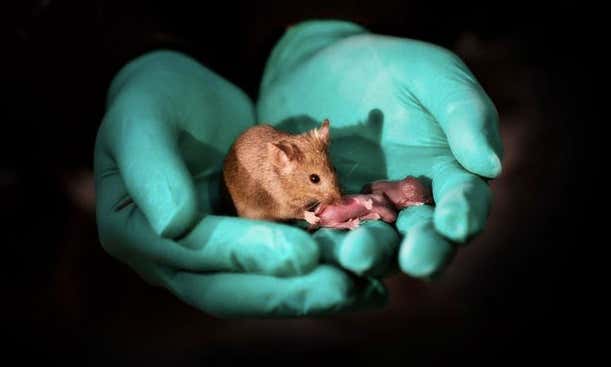 Source –  A team of researchers from the Chinese Academy of Science describe the complex process of using embryonic stem cells and gene editing to produce mice born from two parents of the same sex. The mice with two dads only lived about 48 hours, but the mice with two moms lived to adulthood—and were able to have babies of their own by mating with male mice.

The research provides a new, sophisticated result that’s part of a significant body of research exploring the question of why we need two parents of different sexes at all.

Why DO we need two parents of different sexes? Because science tells us to? Poppycock. As long as the couple is lesbian the children will thrive well into adulthood. Male couples aren’t able to keep their offspring alive more than forty-eight hours because they get distracted. The second a guy walks by in grey sweatpants they forget they had a kid in the first place. Next thing you know it’s over. But that’s beside the point.

This is an incredible scientific breakthrough that in theory could change the way humans procreate. Obviously, that won’t happen because the government won’t let it, but it’s still cool to think about. It makes you wonder what else we could accomplish if the scientific red tape was removed. We’ve been working on flying cars for a while- could we get that done? Or what about cloning, we haven’t done anything with that since Dolly.The only area we’ve made significant leaps in is sex dolls. You can get a real-sized, silicone human for like five-hundred bucks. Not that I know.

Regardless, I wish these two nothing but the best and congratulations to them on making history. As long they don’t divorce this will be a major win not just for gay couples, but for all humans. #teamscience.