For those that don’t know about what was at stake during the Yankees/Red Sox series outside of a spot in the ALCS:

So this fight apparently happened over the weekend, and contrary to popular belief, apparently took place during the McGregor/Khabib PPV instead of after one of the Yankees/Red Sox ALDS games. But nonetheless, as those banshee screams and blood flowing from that dude’s face tells us, that was a brutal fight. I’ll admit that I didn’t think Boston was all sunshine and rainbows because all their fans should have a post-coital glow since their city is now Titletown, USA. You are going to have thousands of bar fights every night around the country. The chances of those happening increases by about a million when there are a bunch of colleges and I suppose this could have even been an Irish vs. Russian fight since those nationalities are never one to turn down a brouhaha.

But where the fight took place is what concerns me. Motherfuckers were getting their faces bashed in by flying glasses and leather chairs. It’s not often you see a fight that bloody take place somewhere that nice. If you go to a bar with plastic cups and worn down chairs, you shouldn’t be surprised by a fight. You should almost expect one sooner or later to be honest. It’s like the broken windows theory for watering holes. But to see a brawl with the vibe of an old ECW match take place in that had appetizer plates, imported bottle beer, and lemon slices in glasses of ice water is a little worrisome considering our pal Hubbs has to host watch parties behind enemy lines. I don’t know if Portnoy would actually send him to some dive full of Sullys straight out of The Departed that makes Patty’s Pub look like The Plaza. But it appears that Hubbs may not even be free from violence if he is sent to a place that has Bar & Grille in its name, with the extra pretentious E in Grill. I also would love to see if having his life on the line will cause Hubbs to root for the Red Sox, because the chance of him getting murdered drops substantially if the Red Sox win the World Series.

For the record, I honestly believe Hubbs living out of the Milton office would be incredible content if for nothing else other than the nostalgia of seeing that old dump back in our internet lives again. But I imagine Barstool gave up the lease years ago once HQ moved to New York.

*Thinks about everything we know about Barstool*

Yeah, we almost definitely still pay rent there. God I hope the heat works and the squirrel in the wall has a whole litter of friends for Hubbs and whatever sad video guy has to document his day-to-day. Oh yeah and I hope Hubbs doesn’t get killed either. For all his flaws as a sports fan (outside of being a Syracuse fan), he’s actually a pretty decent guy. Don’t tell him I said that last part. But I am keeping it in the blog just so I can show people how much I liked him at his potential funeral within the next month.

P.S. I love Black Hat Guy staying neutral during the entire fracas. Black Hat Guys are either the craziest fucks in the place or more neutral than Switzerland. No in between. 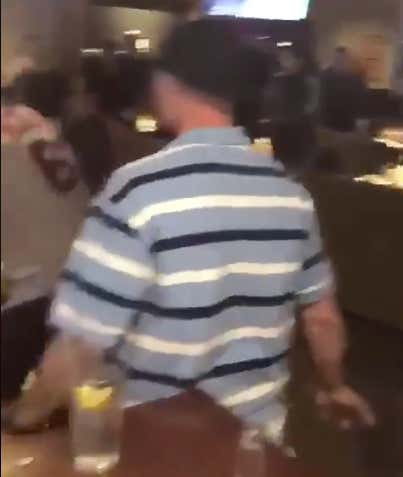