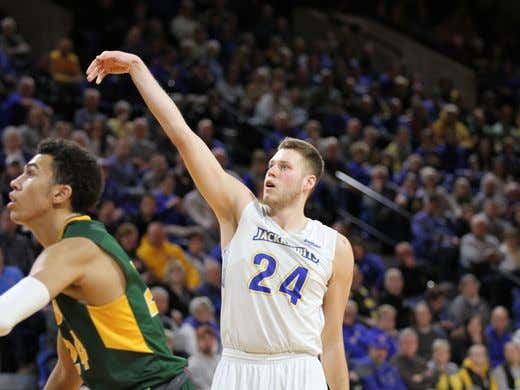 We’re officially starting college basketball season. Practices started, Midnight Madness happened for a majority of schools. So with the season here, it’s officially preview season and we’ll be looking at a bunch of different things heading into the season. There will be the traditional top-25, best players list, conference previews and all that jazz, but we’ll also go more in depth, looking at different offensive and defensive sets and what makes teams so consistently good. We’ve been breaking down a team per day and we’ll keep doing that, but we’ll also branch out to some other ideas.

We’re going to focus on the small guys today. Now, that doesn’t mean that these guys aren’t as talented as the high-major guys or anything like that. But, it’s worth talking about mid-majors. They simply don’t get enough love across the country. Now, for mid-majors we’re going to focus on true mid-majors. That means no one from the A-10, AAC, Gonzaga, BYU, St. Mary’s, Mountain West or Missouri Valley. We want to look at true mid-majors to give them some love because here at Barstool we care about the small schools. Here are the 10 best mid-majors in the country this season.

10. RJ Cole (Howard)
RJ Cole is probably the best player you never heard of. That’s what happens when you play on a bottom half team in the MEAC like Cole had to do last year. That said Cole was unbelievable as a freshman. He was top-50 nationally in percentage of minutes played, percentage of possessions, percentage of shots, assist rate and fouls drawn per 40 minutes. He averaged 24 per game last year to go with 6 assists and nearly 4 rebounds per game. He’s good enough to win the MEAC.

9. Devontae Cacock (UNC-Wilmington)
Cacock led the nation in rebounding last year at 13.5 per game. Throw in the fact he also pitched in over 17 per game and you can see why people are high on him again this year. What makes him even better as a rebounder is he does it on both sides of the ball. He was 2nd in offensive rebounding rate and 3rd in defensive rebounding rate. Getting those extra boards and finishing just makes for free points.

8. Chris Clemons (Campbell)
Don’t be surprised to see Clemons lead the country in scoring this year. The last two years he averaged 25.1 and 24.9 points per game. He’s one of the more entertaining players in the country especially when you factor in he’s just about 5’9″ as well. He’s averaged over 4.5 rebounds per game as well.

7. D’Marcus Simonds (Georgia State)
Simonds is a possible NBA Draft pick, especially after the year he had a sophomore last season. He put up 21.2 ppg, 5.7 rpg and 4.4 apg. He does a little bit of everything and the scary thing is he can keep getting better. He shot just 29% from three while shooting over 4 threes per  game. If he can just get that average up to like 35% think about how much better he’ll be.

6. Charles Bassey (Western Kentucky)
I’m taking a bet here that Bassey will live up to the hype as a freshman at Western Kentucky. The 5-star recruit reclassified this year to join the Hilltoppers this year. He’s a top-10 recruit that held offers from schools like Kansas and Texas A&M.

5. Ja Morant (Murray State)
Morant is a possible top-20 pick in the upcoming NBA Draft. The guard is going to take on even more responsibility with Jonathan Stark graduating. Morant averaged over 12 points, 6 rebounds and 6 assists per game as a freshman. Morant is one of the best passers in the country as he finished 46th in the country in assist rate.

4. Fletcher Magee (Wofford)
Arguably the best shooter in the country, Magee has shot over 42% the first three years of his career. What’s scary is his freshman year was 47%, which is just a crazy number on over 5 attempts per game. He’s also just a great scorer as he put up over 22 per game last year.

3. Justin Wright-Foreman (Hofstra)
This is a kid that can just do everything. He averaged over 24 per game last year while pitching in over 3 rebounds and assists per game. He flirted with the NBA but decided to come back to Hofstra for another year. What’s arguably more impressive is he was 3rd in the country in percentage of minutes played, playing 94.8% of possible minutes last year. He’s the reigning CAA Player of the Year and likely will be again this year.

2. Jon Elmore (Marshall)
Elmore was second in the country in percentage of minutes played last year. That’s not going to change. D’Antoni knows he can put Elmore out there and he’ll stay out there. He’s a triple-double threat too. The guard averaged over 22 points per game and nearly 7 assists and 6 rebounds per game. He can do it all. Elmore’s game is predicated on being able to keep defenders guessing. he has range out to 30 feet. He has a stepback jumper. He’s a catch-and-shoot threat. He has a handle that can take guys off the dribble and then create havoc because the defense has to scramble to help but forget about his ability to pass.

1. Mike Daum (South Dakota State)
Daum is an NBA prospect and someone who can just dominate a game. The 6’9″ big guy averaged 24 and 10 last year while shooting 42% from three. The Jackrabbits will continue to run their offense through him. He’s been a two-time honorable mention for All-American teams while winning the Summit League Player of the Year award the last two seasons.